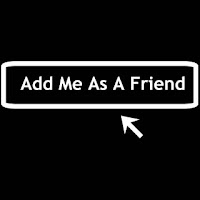 Do you know how I know? Because the Resident Offspring has informed me that she no longer has any objections if I want to get an account. "We never use it anymore, just for gossiping."

Now that it has jumped the shark, it's okay for parents and teachers to move in, apparently. The teenagers are moving on.

And this after Sean even came up with some acronyms for me to use on facebook so that the all powerful one would not find out that I was breaching her borders.

Should I join, or should I wait for the next best thing? I did just join LinkedIn and Blip.fm, after all. My reputation as a non-joiner could be in jeopardy.

Posted by Barbara Bruederlin at 1:19 pm

Email ThisBlogThis!Share to TwitterShare to FacebookShare to Pinterest
Labels: way behind the curve, when social networks go bad

Mel has been all over Blip. I haven't joined...I'm at the computer too much already. ;)

This new Facebook does blow goats somewhat (but you wouldn't know the old one, so...) and it'd be great to have you in the fold!! Especially since a lot of bloggers are posting there these days instead of posting on said blogs.

I love the Sean created some acronyms for you. He wasn't joking. ;)

I figured it was "over" when I started hearing a bunch of guys I work with talking about their facebook pages like a bunch of middle school girls...

We must be having some odd blogger ESP because, Barb, I just joined that Facebook mess last night. Not even 24 hours into it and I don't see the big deal.
That said, it's not that bad. And, BE MY FRIEND?!

In some ways, it's a good communication tool. It is strange, though. I wound up with a network of 'friends' that run the gamut from friends to relatives to co-workers and ex-co-workers to people I went to school with years ago. Plus a couple of favourite writers, but that probably went without saying.

The biggest challenge with facebook is the self-editing, deciding just how much info. to put up. For example, your friends might be fine with knowing where the bodies are buried but your co-workers might not be able to handle that sort of info. (perhaps not the best example. . . )

I did Facebook because some band members were and I thought it would be useful. I hate it, never use it, too juvenile. And besides you can never delete your page when you want to quit.

You can deactivate your page when you want to quit. It is just stored and can be reactivated, which yes, is somewhat creepy.

See? I didn't even know there was a new Facebook, Al. It would be fun to be part of the live blogging parties.
Have you friended Thom yet?

DO I NEED TO TALK IN ALL CAPS ON FACEBOOK, JEN? BECAUSE I WILL IF I HAVE TO.

Yeah, I don't really want to be one of those guys, Bubs. Although I am sure it would be fun to work with you, but not the other part, the late adapter part. meh.

Well, I already am, but we can make it official if I join too, Justrun. Great minds in sync, eh?

I will be sure not to mention where the bodies are buried, Remi. It just seems like bad etiquette anyway. Thanks for the heads up.

It sounds as though there are still a lot of teenagers on it, after all, LEazwell.

It's part of the Googlification of the world, Al, which is starting to concern me greatly.

So if the youngsters are leaving the Facebooks in droves just where are they going? They shouldn't be doin' something fun that we know nothing about.

Oh and they were anagrams Dear Rabb... Although, look me up if you would prefer an acronym. ;)

geez, I've never been on Facebook...I'd like to hold firm and stay off right to the bitter end. I take it as a point of pride, like never driving on the "407" toll highway.

Oh yeah, they were anagrams! D'oh! I knew it started with an A, Sean.
I don't know what those kids are up to, I think maybe they are inventing a new internet or something. Wait, you can play shuffleboard on Facebook?

I know, Mr Anchovy, that's why I've never watched Titanic either.
You have to PAY to drive the 407? Never!

It seems Facebook is now the forum for a new demographic anyways, I just saw a snippet on the news which said I am right in the middle of the top majority deomgraphic who has signed up to Facebook recently. ( women 25-50 )

I like it I do a lot of networking through it, its good for the working musician without a doubt!

The new format sucks though.

Um. Yeah. Facebook is kind of over now. And I have no idea what other networking site my peers are heading off to in droves....Bebo, I think.I don't know. Social networking ain't my thing.

And hey Sigur ros are on FB as well!

I'm all about twitter at the moment. I love it. As I have JUST mentioned on Alli's blog, I've gone right off facebook. Get on twitter!

Wow, I knew everyone hated the new Facebook, but I didn't think it would kill it. Oh well! Now I don't have to feel guilty about forgetting to log in and accept all those stupid "pass a drink to" things.

Welcome to Blip! What do you think so far?

I mainly use it on the weekends, but I love it.

Oh yes, I have developed a raging blipfm addiction! I think I've injured myself in fact! I would LOVE it if you joined facebook!

Welcome, Rachel. Facebook doesn't seem to be for the kids anymore, that's for sure. Must be frustrating to constantly have your playground expropriated by the grownups.
I have heard lots of complaints about the new format.

Bebo? Really? But that's not very cutting edge, BAP, I think I even have an account there somewhere.
I wonder if SR and RH hang out on FB?

Jury's still out on blip, JustA. I've only been on it for a couple of days. SO far I have been unable to locate a few artists that I thought I should be able to find, so.

I'm not sure about joining FB after all, Mel. I don't care so much about immediate updates, I just want to write and post pix and read what other people are writing.

I think the teenagers are now using something called Assbook.

That's certainly what I would be using, Beckeye.