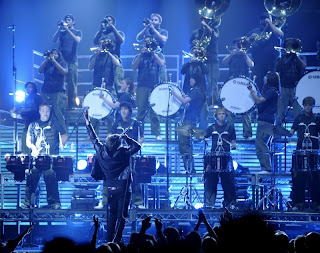 Fortunately someone else will always step up to the plate for you.

In my case, Green Plastic Radiohead posted some heartwarmingly lovely video footage that the kids from the USC Trojans Marching Band put together to commemorate the night they played with Radiohead at the Grammys. It is so worth watching, especially the still at the very end, in which Thom and Jonny pose with the entire group and they are all making peace symbols.

But my very favourite bit comes in at about 6:25, when the band starts playing some marching band song and Thom starts dancing like only he can. The man just can't help himself, evidently! He's got the music in him.

I love those kids, they are fresh and funny and awesomely talented, and I hope that night will always remain a magical moment for them.

Posted by Barbara Bruederlin at 6:53 pm

Email ThisBlogThis!Share to TwitterShare to FacebookShare to Pinterest
Labels: fun with Radiohead, making Miley Cyrus jealous and don't even get me started on Kanye

What's this about Kanye?

Kanye is my new favourite comedian, John. He figures that Thom dissed him backstage at the Grammys, so when Radiohead played, "I sat the fuck down!" says Mr West. Later he recanted and said he sat down out of respect because if Thom wanted to diss Kanye, "he earned the right".

The man is pure comedic gold.

KANYE THE CAP WRITING RANTER? or Kanye my treadmill?

I'd get them mixed up but my treadmill Kanye works harder than the "voice of our generation."

I wish I were one of those band kids, man. Nothing in their lives is ever going to come close to the awesomeness of Grammy night.
Which is probably a bit sad. If you think about it. But still awesome.

And I LAWL at Kanye having been dissed at by the Thom. I LAWL my guts out.

You really named your treadmill Kanye, ?UB? That is awesome, and I have to admit I am rather proud of myself.

Kanye makes me LAWL all the time anyway, BAP, but this was especially good. The Miley Cyrus thing was pretty hilarious too. No wonder Radiohead shun the whole celebrity bullshit, hence causing spoiled little celebs to get all pissy at them.

"making Miley Cyrus jealous" -- hahahaha this is really the best news story ever. I can't even believe her. I read an Oscar postmortem that said her dress "looked like an oyster threw up on her" and I almost died of laughter.

love marching bands. Used to be in one - drum core. Snare.

That thom can join in is a testament to his appreciation for music.

Hahaha oyster vomit! You just watch that be the hot new car colour this year, Ruhee. I love the drama surrounding the Miley Cyrus thing, too funny.

Drum corp sounds so official, Gifted. I feel like I should salute.
It looks as though Thom was really enjoying himself with those band kids. A delight to see, really.