the Great BC Odyssey - walk for eternity day 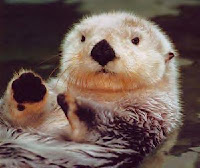 The Vancouver Aquarium was pretty incredible. We watched belugas being fed and dolphins being trained and spent far too much time squealing at the sea otters. Did you know that if you placed your thumb on a sea otter's coat, there would be more hair under your thumb than you have on your entire body? Or that sea otters eat 1/4 their body weight in fish and squid and clams each day? Sign me up to be a sea otter in my next life! The turtles, frogs, and bats were really cool too.

direction from whence we came, in order to see the ocean point before getting back to where we had parked. And hour and a half later, we started getting a wee bit panicky as there was still no sign of the parking lot and we realized that often the seawall was separated from the road (and the car parks) by impenetrable forest and sheer cliffs. Fortunately, after a bit of false backtracking and retracing our steps, we stumbled upon our car, headed back to the hotel for a much needed glass of wine, and headed out again, this time on foot.

In Chinatown, we fought off, in our polite Canadian way, the aggressive salespeople at the gift shop in the Dr Sun Yat-Sen Classical Chinese Gardens. The gardens were much smaller than I imagined they would be, and quite lovely. The Chinese gag gift shop down the street was pretty amazing, although there was a perplexing abundance of Linus Van Pelt and Snoopy paraphernalia.

We then had to cross East Hastings Street (the sad mean streets of Vancouver) in order to get to Gastown. The Spousal Unit thought we intended to actually walk along Hastings, put on his game face and started to march determinedly through the centre of the crack deals.

Gastown was a bit of a disappointment, although we did see a lot of design places, including one featuring elephant-shaped chairs that were mounting each other in a decidedly sexual fashion. Gastown is along the waterfront, but the view is entirely taken up by cargo containers. Now I realise that Vancouver is a working port and that in order for me to get the goods that I expect, the ports need to function, but I think that Gastown should not be touted as a waterfront tourist destination. 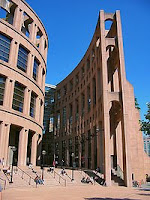 We did stop for a coffee, where the Resident Offspring partook of some accidental underage drinking in the form of a specialty coffee. She took advantage of the situation by then immersing herself in the most jammed to the rafters used bookstore I had ever seen. The Spousal Unit left to go back to the hotel, while I waited outside, as the store gave me claustrophobia. We passed through the architecturally amazing Moshe Safdie-designed library on the way back to the hotel, so that made up for it for me.

We had a fantastic seafood supper at Coast restaurant in Yaletown (where we should have wandered instead of Gastown), loads of fresh crab legs, oysters, mussels, lobster, sushi, clams - all chilled and served in a wok mounted on steaming dry ice. Very impressive entrance it made.

We then waddled off to our hotel to get ready for our ferry trip over to Vancouver Island in the morning, pleased with ourselves and our ability to pick a good restaurant.

Posted by Barbara Bruederlin at 2:17 pm

Email ThisBlogThis!Share to TwitterShare to FacebookShare to Pinterest
Labels: otters and other adorable creatures, the Great BC Odyssey, the sun shone all day

I love sea otters, and funnily enough, I always thought I'd like to reincarnate as one.

Gas Town is terrible! It's a tourist trap and the only semi-worthwhile thing there is that stupid huffing steam clock - anticlimactic at best. It certainly is NOT a waterfront destination, as you describe.

It's sad that some of the most cluttered bookstores often hide the greatest treasures because they tend to remain hidden. There are some stores that even I will pass up as they are just too chaotic.

Of course, too tidy is almost as bad as the person who has time to organize everything likely hasn't spent much time finding interesting books.

I have always wanted to be a sea otter as well, Wandering Coyote! River otter would work too.
I wish we had spent more time in Yaletown, which did look fun, or headed over to Granville island perhaps, but I guess that will have to wait till next trip.

It's a fine line, I think, Remi. The RO was not at all put off by the clutter. I guess all those years of practice living in her room have paid off.

Maybe you otter carry a map next time you walk around that aquarium joint.

Oh my, otters are so friggin cute.

I have some great photos of a few old book stores from my first trip to Vancouver. It's really a cool thing they have going there.

We actually had one, Dr M, but it was all of 1 square inch and not too informative. Appreciate the pun though.

It's a great city, Justrun, although right now every square inch is under construction in preparation for the upcoming olympic debacle.

I can't wait to see pictures!

Oooh, walking the sea wall? Well done. I've only ever biked it, its about 10km?

Yeah, Yaletown is a nicer area than Gastown. I remember always going to the cinema in Chinatown and having to avoid the aggressive store keepers. ;)

What good fun! As usual, I enjoy living vicariously through your jaunts.

The cherry blossoms are out in D.C. as well. Too much taffic up there to bear, thankfully I've seen them before albeit years ago.

It's so interesting to see my city through the eyes of a visitor. I agree you should have been walking around in Yaletown, its much fresher, with more current stores, and way cooler places to eat.

Having said that, I rarely go downtown myself, preferring to avoid the traffic and parking issues.

Stanley Park is wonderful on a warm sunny day, much easier to take the seawall when you are not being pelted with freezing wind.

Glad you had fun. I also loved the pics on Jens blog, from your trip to the Islands.

The shop keepers are relentless, Al! And more than a little scary.
We actually only did the seawall tip, from aquarium to aquarium, but it was plenty long enough, especially since we weren't sure we would ever find our car again.
Pictures are on the way!

Cherry blossoms are lovely, aren't they, Leazwell? And I do imagine that Victoria has far less traffic than DC, far less.

I liked Vancouver a lot, Rachel. I haven't been there for years, and back then didn't really get a chance to explore much. I like seeing a city by walking, so downtown was a good location for us, but I can sure see why you would want to steer clear of the area these days.
Jen took some good pix, didn't she? Mine are coming up soon.