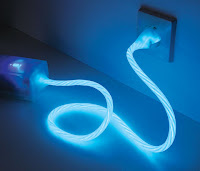 My laptop power cord is trying to commit suicide on me yet again, the third one that I have driven to madness.

I simply don't understand their poor attitude, I mean I practically have them ensconced in a luxury penthouse where their every whim is catered to by a posse of Harajuku girls, and yet they still choose death over life with me.

This one is shuffling off this mortal coil in a slightly different fashion from its predecessors, however. Gone is the curious chirping noise, followed by eventual death. This one's symptoms seems more easily diagnosable, it is fraying near the plug that goes to the back of the laptop. Sometimes I have to wiggle it to connect properly.

And seeing as the laptop is still under extended warranty, it would seem straightforward to order a new cord for me, wouldn't it? Ha ha, I hear you laugh, as you obviously see where this is going.

The first snag was when I discovered that the Future Shop at which I bought the laptop no longer exists, so I phoned another one and described the issue and the tech told me to bring the laptop in, as they needed the SIN and such off it and they would order a new cord. It would not be necessary to leave my laptop with them. In my travels, though, I ended up near a different store, so I schlepped my long-suffering laptop in, where I was told that they would have to send my laptop and cord away for a "minimum of two weeks" for analysis before replacing the cord. Please! Just shoot me now already!

Obviously I will be trying my luck at the other location today. Is this a ploy to keep me from using my warranty, or is that just paranoia talk?

It does appear though, that I am becoming the subject matter expert on chirping power cords. I regularly have keywords searches related to same. There were two today.

Google obviously thinks I know far more than I actually do.
Have you found yourself the designated subject matter expert lately on something about which you know nothing?
Posted by Barbara Bruederlin at 7:55 am

Email ThisBlogThis!Share to TwitterShare to FacebookShare to Pinterest
Labels: Favourite Five Friday, I imagine there are many things you can do with jello, sitting on my lap doing nothing but chirping at me slightly revised

It really does seem like the powers that be do not want you to use your warranty. I really hope you don't have to send it away. That just plain sucks.

Hahaha! You always have the best search terms. So, how many things can you do with jello? ;)

I find that people always ask me for directions. Strangers on the street, etc. Funny this is, I'm kind of horrible with geography and use landmarks to tell directions.

Oh, I do love hearing about other people's weird searches because it makes me feel slightly better. Slightly. I do seem to be the local go-to person for nude people in my area and finding out if a particular celebrity is circumcised.

that is absolutely ridiculous

We had similiar type of "warranty" issues with a camera at Future Shop and had no luck whatsoever - despite it being under warranty - and extended warranty. STill have a broken camera that was only 2 weeks old when it became damaged and all that warranty coverage, despite sending it away. I have no faith in Future shop's warranties whatsoever - it was and is just a money grab.

Are you using this power cord in the same outlet all the time? I came across a forum where other people have had this problem and for some it proved to be the outlet. (Too much load) An expensive electrician to correct the problem was all it took.

Oh the woes surrounding the computers and the kind! And the warranties...

I hope that works out okay, without having to send in your laptop away!

How are you doing Barb?

Hope they're treatin' you nice Barb, they don't want you going all Office Depot on their ass. Minimum 2 weeks indeed. Pah.

I stopped counting Jello uses at about 45, Al, but I am sure there are plenty more.
You must look just like somebody who has taken an orienteering course or something.

Good to know, Wandering Coyote! I will certainly keep you in mind if I need to know any of those things.

You throw the word minimum in front of anything, and it gives you carte blanche to take as long as you like, Kelly.

I have actually had really good results with Future Shop's extended warranty on my laptop thus far, Kathy, and I have used it quite a few times. I have found you just have to get the right person.

I plan on doing a lot more Radiohead listening, Gifted, I feel as though I have been neglecting my boys lately. But I will even watch the Grammys for the first time in my life, just for them.

I actually use several different outlets, UB, so I don't have to call in the expensive electrician. Yay!
"Old Sluts in Corollas" - wouldn't that make an excellent band name?

I'm doing great, Jas. I hope to make it out to the university in the next few weeks, for coffee or perhaps even lunch.

I am not nice when I go all Office Depot on somebody's ass, Kees, true story. Fortunately, this tale seems to be having a much happier outcome

By the time I'd read this, things had improved greatly.

Very weird searches you have there. Glad you're publishing them--shame on 'em!

The saga never really ends though, does it, BJ? This is true of power cords and keyword searches.

OH MAN, is that a veiled Chumbawamba reference? Amazing. "He takes a whiskey drink, he takes a vodka drink ..."

Also, I love the one about the Corolla. I love people who ask an entire question of Google, expecting the answer to pop up just as if you entered an arithmetic problem or a definition (the first time I did that, by the way, I was a little spooked -- Google really is omnicient!).

Good spotting, Ruh. It is indeed a reference to Tubthumping. I get lots of those, all a variation on the real lyrics.
The complete sentence/question queries, complete with punctuation, are my favs too.