WHAT did you just say? 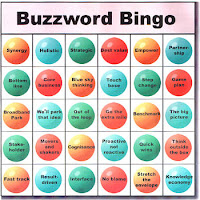 As you no doubt know, bailout was chosen as the buzzword of 2008.

Obviously it is far too early to be speculating on what the buzzword of 2009 will be, but I think that in the meanwhile, we need a mantra for the year, a catchphrase to unite us, to rally us, to embiggen us. We need some words of strength to get us through the dark, at least until it's shortbread eating time again.

Speaking of words (or those things that sometimes pass for them), the Spousal Unit's mother was complaining to him the other day that it was still so cold out that it was hindering her trips to church. "It so cold", she explained, "that I have to put on my coat and my hat, and then I get to church and I am so HAWT, I think I die".

To which the Spousal Unit quite reasonably asked, "why don't you take your coat off in church?" "Oh!", she replied, all offended, "so you want me to be the only person in church to take my coat off!"

I guess it's sort of like "boiling but cold". Which I will have to tell you about another day.
Posted by Barbara Bruederlin at 9:03 pm

Email ThisBlogThis!Share to TwitterShare to FacebookShare to Pinterest
Labels: putting words in my mouth, will you tell me when I start getting old(er) and weird(er)

Interesting. Me and the better half have been discussing whether we should have an official family motto for 2009. I suggested "Victory or Death", of course not specifying what exactly it was we would strive to be victorious in. She suggested "Adapt or Die", suggesting a certain hardy flexibility to facing life's challenges.

Oooh, I do sort of like that last one.

Beer before whiskey; drinker is risky. Whiskey before beer; nothing to fear!

I don't think it will catch on, but I've already had my pedicure for the year.

It's true though, Al, even in the worst of times, you still need to look after your feet.

I see that death and dying seem to be the unifying factors in your theories, Bubs. It's heartening to know that you are striving to keep things so positive.

I'm beginning to think that might be my mantra for the year, Justrun.

Does that mean I will fit right in when I come to visit, D? Except for my weird accent, of course.

I LIKE it, Doc! Those are words to live by if I have ever heard any, especially if you don't need a pedicure.

Him, I posted a Bullshit bingo card on a blog I do for a company. It's all in the noble cause of trying to stamp out corporate jargon like synergy, capability transfer and operationalize. I work at a place where people actually use these words.

Sorry, that's meant to be hmmmm, not him, just in case you were wondering

These are all good, but we need something more concise, not a phrase. "Bruederlinear" is sort of like snarky optimism, doesn't it?

I think "Takin' your coat off in church" could be some sort of dirty euphism if said in the right tone of voice.

That must have been a very satisfying blog post to create, Gifted. But be honest, don't you really want to write a haiku containing synergy, capability transfer and operationalize?

Bruederlinear is one scary word, John! It does sort of speak to the stereotypes surrounding my German heritage though. I like it.

I never considered that, Beckeye! Maybe that's exactly what she meant. I'm a little out of touch with the elderly Polish community.

how about 'asshat'?? I love that word!

BeckEye's comment reminded me of that Blink 182 release "Take Off Your Pants and Jacket" & it bugs me because I don't like Blink 182 & it's embarrassing that I know that name of one of their albums... grr.

I dunno about pedicures... I think I'm kinda squidgy when it comes to my toenails. I'm petrified they'll cut too close or it'll hurt or something! But if momma enjoys 'em then hell, can't be all that bad.

I hope that won't end up being the way we sum up 2009, Bridget. That would be asshatty!

It's not so much that I enjoy the process, Michelle, although I don't mind it, but I love that my feet are all smooth and perky-feeling afterward.

(with a nod to my personal hero, the SU's mother)

She would be THRILLED to hear that,Urban, and I think that is a hell of a perfect mantra.