Is there anything better than barley? Besides oats, spinach, wine, and chocolate, that is?

I don't think so either, so I have no idea why I don't make this barley casserole more often. It's dead easy, as long as you have a couple of hours. And since living frugally is about to become chic apparently, it will make you look hip and smart, because it is so cheap to make. Impress your family and friends today.
*

In a bit of butter, saute for about 10 minutes:
1/2 finely diced onion
1 cup each diced celery and carrot
1 cup rinsed pot barley
- feel free to add anything else you like, mushrooms, spinach, kale, parsley, dill, etc

Add 4 cups stock (I use chicken, but you could very well use vegetable), salt (only if stock is unsalted) and about 2 tsp pepper.

Pop uncovered into 350 oven for 1/2 to 2 hours until barley is tender, stirring 3 or 4 times.
You can add toasted sliced almonds and/or dried apricots at this point, if you want to pimp it up a bit. 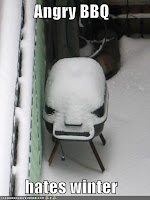 We finally get barbequed food again tonight, for the first time in a month. A long overdue chinook is blowing through, raising the temperatures above freezing. The cat has gone outside for more than 20 seconds, the ice has melted off the windows - not that there is anything to see, and we are drooling about the thought of food that has been cooked in the manly style - over fire and out of doors.

It's totally worth the chinook migraine that Urban Blonde has right now. Thanks for taking one for the team, Urban Blonde!

Posted by Barbara Bruederlin at 2:51 pm

That picture of the BBQ reminds me that I have pretty interesting shot of an EMO parking meter...

Chinook Migraine alone be damned, it's actually progressed to include insane painful pressure in my ears (imagine an airplane descending into Vancouver).

Also you do realize that if you ever force fed me that Barley casserole you would kill me right? Don't you have some great gluten free depression era recipe for me to try?

Oh yum! I discovered my love for barley (and other grains) last year. They are fun!

Nothing finer than an anthropomorphic parking meter, Wandering Coyote!

Are you stretching out your arms and making airplane noises as you wander around the house, Urban?
I have no crossed "force feeding UB barley casserole" off my to do list.

I love the way barley pops in your mouth, Justrun. It's like some kind of crazy candy.

Yum, that casserole sounds delish. I shall have to try it. I am still in love with your lentil curry soup and make it quite often.

Hope you enjoyed your BBQ! :)

that sounds interesting enough to try.

I salute your gumption on getting out the grill and firing up some coals in the middle of winter.

I could really go for some grilling today, but if I take out my grill and it spots it's shadow we get 6 more weeks of winter. In January.

The kitten loves barley, but not as much as rice.

I haven't had that lentil curry soup in ages, Al. I may just have to subject the carnivores to that sometime this week!

Super-easy, Kelly, worth the try. But be forewarned, it makes lots.

The kitten is eating barley already? Cats grow up so fast, don't they?
Around here, we can count on 6 more months of winter if anything spots its shadow.

Is pot barley the same as pearl barley? That's some serious comfort food, it's always nice when you can be chic in your jammies.

I have this recipe for making this baked ham sauce-type-thing that calls for barley malt syrup... have you ever used it before? I'm super curious as to what it tastes/smells like before I buy some, I mean, what if I hate it? :D Can't I substitute a Guinness reduction or something?

Mishell'd: Barley malt syrup is a very thick syrup that I've used in bread making. It has a really strong flavour that's hard to describe...It's sweet and a type of sweetener. How much do you need for your recipe? You might be able to substitute maple syrup instead.

I think pearl barley is more refined than pot barley (although I could be mistaken) as pot takes longer to cook, Michelle.
And I would hazard to say that you can ALWAYS substitute a Guinness reduction!

Thanks for weighing in on this, Wandering Coyote! I had no clue. But it's great to have knowledgeable people helping out.

I have forgotten what barley tastes like, man. But hopefully I'll be trying this recipe out soon!

And dude, broccoli is waaaay more awesome than spinach.

I just got the barley out for a nice Scotch Broth. Perhaps a Scotch Brothel would make it sound more appealing? Actually no, cancel that