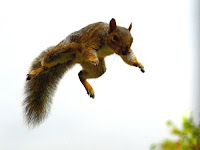 I was working at the dining room table this afternoon when something crashed into the window, not a foot from my elbow. My immediate thought was that a bird had flown into the glass, but the dining room window is at the side of the house, and not that far away from the house next door. WIth the trees and fences surrounding both houses, it would take some kind of freaking kamakize dive-bombing bird to pull that off.

And then I spotted the squirrel darting erratically away from the house and noticed the wee muddy paw print smear on the glass, surrounded by what looked like spray patterns of spit or perhaps snot. Nutty squirrel must have jumped from the fence, which butts up to the house, aiming for the rain barrel which is just under the window.

And then I remembered that Sputnik was in the back yard. I wouldn't put it past her to have said something to that squirrel to egg him on. You know how cats can be such assholes. Hey squirrel, bet you can't make it onto the rain barrel from the fence! ... Oh come on, don't be such a chicken shit!

I'm beginning to think our cat is some kind of hypno-toad.

~*~
Speaking of being led astray, here's a link to the January issue of BC Musician Magazine. Besides my article, Deconstructing Polaris (pg 24-25), there are stories by the likes of musicians Geoff Berner and Rae Spoon, and a fascinating tale of traveling cross country via van fuelled by french fry grease.

For those of you who are falling all over themselves to start reading my story first (and I am sure you number in the ones), here's the link to Deconstructing Polaris only.

~*~
I'm going to leave some Tylenol out for that squirrel tonight.

Posted by Barbara Bruederlin at 7:15 pm

Aren't furry rats hurling themselves into glass one of the signs of armageddon?


Off to quickly read your article before that happens.

The other day I looked out the window and saw a squirrel out in the back yard jumping up and down on all fours over and over again. (the cats were all in, honest)

That picture is ace!

You know, I should be more friendly to cats, if they are edging squirrels on. We share an enemy.

Off to read you article now!

Unknown said...
This comment has been removed by the author.
10:37 pm

Only if the furry little bodies start piling up knee deep in the yard, Urban, butI could be misremembering the bible.

It was a Jack Russell squirrel, Mr Anchovy! You knew it was only a matter of time before the crazed dog breeders came up with one of those.
I'd say it was a very good thing the cats were all indoors.

My cat will gladly share her enemies with you, Al. She has loads to spare, and rather prides herself on that.

hahahaha my vw is hymen! Honest and for true.

maybe the squirrel has gone squirrelly?

Be careful--those squirrels are not to be trusted. My youngest had a couple of them stalking her for a while before the snow came.

I'm with Urban Blonde - the squirrels are amassing their forces and testing us for weaknesses. Consider it an early warning sign - they're preparing for their final attak.

Or possibly rabid, Kelly, which is always comforting.

It's like they're all hopped up on something, Bubs. I guess this is what happens to urban squirrels after a while.

They should have tried the study window, then,Karen. They likely could have knocked that one out easily enough. Good point, though, I will be vigilant.

What is it with wild animals torturing the Zombie household? If it's not maniacal woodpeckers, you've got cuckoo 'squiddles' hurling themselves into your home... You might want to check and see if you're built on some burial grounds or something.

Great stuff with the Polaris article. I really enjoyed your fresh take on that one. And for the record I am predicting right here and now- a Chad Van Gaalen win!

I love the line in your piece - "And the thing you can say about a name like Holy Fuck, its pretty easy to spell."

squirrels are deadly when they get in the house

Well, i rode the Data bus right over to your story on the Polaris prize and it was well worth the trip! Nice piece.

On the prize not old enough to piss anyone off yet:
I don't think it's the Polaris prize. I think it's Canadians.
It's not in the Canadian character to care less about who wins an "elite" (good elite) prize like the Polaris. Canadians get pissed off about hockey matches but don't really show passion for cultural prizes.
Maybe it's Canada that has to grow before it will get pissed about a Polaris prize.

Literally LOL'ing at the squirrel description!!!

I never considered the burial ground possibility, Sean. You may very well be onto something there. Time to cash in on this place and move to that nice summer home in Transylanvia.
Nice call on the CVG projection! I'll back you on that.

Thanks, Al! I was pretty happy with that line too. My editor had to do come cutting for space and I was really hoping she'd leave in that line.

If that squirrel made it into the house, through that glass, we would have been in a pile o' trouble, Gifted.
You have a valid point about why Canadians are not getting riled up about Polaris, but in all honesty, the prize hasn't yet goofed up. And plenty of Canadians do get riled up about the Junos.

It was the goofiest thing I had seen in a while, Bridget.

Oh my God, I can't stop laughing at that picture. I'm so easy.

Out here in the country they just come in and gnaw in between the walls....bastards. I hate squirrels.

I hope that tylenol was laced with arsenic.

That picture freaks me out, Beckeye! I keep imaging that thing landing on my head, claws out.

City squirrels are much more civilized, Maureen. We take them to the opera and stuff.

Is arsenic good for headaches, JustA? I'll have to try it next time I crash into a window.

It's been a squirrely couple of days. Here's the latest episode of Fup. Store Cat. from the Powell's Books newsletter.

"Bear!" the squirrel shouted. From the front of the rim, he dismounted into the crowd. A woman shrieked and immediately felt ridiculous. In her defense, Morrison did jump awfully close to her head.

Morrison pressed his paws together and bowed. The crowd rearranged itself around them. The squirrel said something in Italian, and the young girl on her father's shoulders interjected, "In English, please!"

Morrison seemed to consider her request before thinking better of it. He went right on speaking Italian.

Bear nodded. Bear looked surprised. Bear said, "No!" At least they presumed that's what he said, Zooey and Bagheera and the others gathered round — or perhaps "no" meant something different in Italian.

"Don't mind us," Oreo remarked. "We'll talk amongst ourselves."

Bear turned. He started to explain but Morrison saved him the trouble. "I've come home," the squirrel announced. "Scoiattolo's Circus, it is no more."

Great article. "Polaris is not simply a wannabe Mercury
pimped out in a touque and mukluks" I have no idea what that means but it's great.

That's quite the squirrel tale, Glassmeow. The squirrels around here would appreciate that, I am sure.

Thanks, Kees. Although I think some of the fashionistas in Britain are wearing mukluks now, I'm pretty certain touques remain headgear for more wintry climes.

I got right on it and got my google on. Beanie hats and furry ugg type things. Gotcha. Brilliant. I ain't no fashionista, and am therefore ignorant in these matters but I still knew it was a great line!

Good googling skills, Kees! I guess those are rather uniquely Canadian words, come to think of it.

It might have been squirrel spit, Mel, but either way, I'm sure it hurt.

Nice work. Did you write the "View From The Venue" segment as well?

No, that was someone else, JustA. We just shared a page.