how can silent masked killers be so dull?

I admit that I occasionally enjoy watching a real stinker, from the comfort of my own chesterfield where I guffaw loudly and exchange pointed barbs at said crap film with the rest of the zombies.

I actually enjoyed Ben and Arthur, which for years topped (bottomed?) IMDB's Worst Movie of All Time List, but last night we watched The Strangers and it was just plain DULL. The first time one of the silent masked soon-to-be killers appeared in the background of the screen and then disappeared, to which the main characters remained oblivious, was rather effective. But obviously the film makers forgot the rule of three, because those silent masked soon-to-be killers just kept silently popping in and out of the background like Whack-a-Moles and the main characters just kept remaining oblivious to them. Very quickly those soon-to-be killers just became annoying.

And don't even get me started on Liv Tyler's whining whisper. How the wimpiest character in film managed to be the only survivor of the blood bath is beyond me. 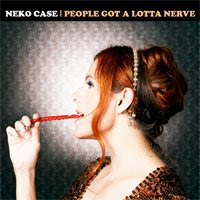 It's the free download of People Got a Lotta Nerve, a single from Neko Case's forthcoming album, Middle Cyclone. Enjoy it in good conscience, knowing that for every blog who reposts this song, Neko Case and ANTI will donate $5 to the Best Friends Animal Society.

Here's how you can repost the song on your blog, and help with the cause.

Posted by Barbara Bruederlin at 9:40 am

Email ThisBlogThis!Share to TwitterShare to FacebookShare to Pinterest
Labels: go forth and repost, movies so bad they're just bad

Drilllbit Taylor - watched with the fam on Fri night. Dreadful, one of the worst ever. We all agreed

Oi, we watched a really bad one too last night - My Best Friends Girl. Which we knew would be crap, but it was utter crap.

I like the Neko song after downloading it at Sean's site. I agree with your take on The Strangers. I nodded off and rolled it back and nodded off again with no scare except for that first effective bit you mentioned. Have you seen "The Visitor"? I just watched it yesterday and enjoyed it.

Wasn't it annoying? I was cheering for the killers after about 45 minutes just so the damn thing would end!

thanks..I'll know to avoid that one

I don't think I was in any danger of watching that particular stinker, but thanks for the heads up.

Love, love, love Neko Case. Thanks so much! Possibly one of my favouritist singers ever.

The awfulness is duly noted and will be avoided. I must say that Jumper has got to be the worst movie I've seen in the last year, really. Although that Spanish horror thingie, [REC], is supposed to be amazingly good.

Will get to work on the Neko Case, too, of course!

I heard that one was awful, Gifted. The RO had to watch that with her volunteer group and almost died.

Why does Dane Cook even exist, Al? That's what we are trying to figure out.

I haven't seen The Visitor yet, Dale, but I hear it's really good. I will def look for it now that you have recommended it. You wouldn't steer me wrong.

Oh I know, Maureen! The damn thing could not end fast enough.

Run away from it, Kelly.

I didn't think I would watch it either, Mr Anchovy, but was struck by one of those moments of wanting a crappy movie to mock. I got more than I bargained for.

She is incredible, John> I am looking forward to the new album! Yay! Carl Newman also has a new one coming out! More Yay!

Oh yeah, I heard Jumper was ridiculous, BAP! I had not heard of REC, but I just googled it and it sounds really good. Thanks for the heads up!

Thank you so much for the heads up on that stinker Barb. a recent trip to the video store yielded nothing. (A sad statement on quality movies out there unfortunately.)

Thumbs up to Dale's suggestion on "the Visitor". Truly one of my favourite's of the year. One of those small stories that resonates to deeply. I'd like to add "Burn After Reading" to the must see list as well. Very, very enjoyable.

Any thoughts on the Neko single yet? ANTI must have unlimited pockets to be shelling out what they will for that promotion. The single in my opinion is a little lacklustre but i will hold out further opinion until I am able to hear it in the context of the full album.

Hope you are enjoying your early spring in Calgary. The white stuff be flyin' as I type here in SNOWVILLE!

Our spring will be shortlived, Sean, as we are supposed to get into more seasonal temps in a day or two.
I think you have a very valid point about Neko's single. It doesn't feel like her strongest effort, but like you, I would like to see how it fits in with the rest of the album. Sometimes that makes a lot of difference. I'm hopeful, anyway.
I've been hearing good things about both Burn After Reading and the Visitor. I shall have to watch for them. I am quite keen to see Brick Lane as well.

Confession time: I always read movie spoilers for thrillers and horror movies. If I know how it ends and I want to see it anyway, it's likely to be a decent flick. So thanks! I now know that's one to avoid.

Dane Cook is a punishment for all our sins. That's my theory.

That is an excellent approach, SME. I may just have to adopt that.

I deliberately rented a movie I would never see in theater's on the weekend, "Wanted".

Turned out I never laughed so hard in my life. So bad it was kinda good. I guess my taste isn't as refined as I thought it was.

DID you spoil it?? Someone else told me that Liv and her boyfriend both die in the movie. I think I like that ending better.

A true crap film where you can laugh at its badness is a thing of beauty, UB. Celebrate it!

Maybe your friends left before the very very end, Beckeye, not that I blame them.

The Strangers will not be making its way onto my must-see list. Too many good things that there that I haven't seen. Perhaps it would be good for a bad movie night? Or too bad for even just that?

Have you seen Let the Right One In?

As far as Neko Case goes, I think the mp3 giveaway was a great promotion and a great cause. Not to mention it is a great song. I can't wait for her new album, which I am sure will be amazing.

Let the Right One In is definitely one I want to see, Will, but I haven't yet. How was it?
I'm really looking forward to Neko's album, but sadly she's not touring it through Calgary.

Liv Tyler shouldn't talk. She should just sit around in a sexy nightgown and smile.

I'm inclined to agree with you, JustA. I don't mind looking at her, she is easy on the eyes, but talking - no.