nothing says insurgence like a little butter and icing sugar

Oh it all started out normally enough, but you know the proper little Christmas trees and snowmen will soon give way to baser instincts. 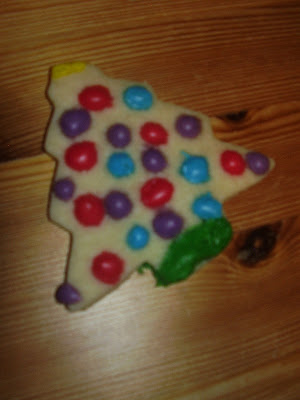 The Jackson Pollack reminiscent efforts were actually quite lovely and while they were on the experimental side, they were still well within the bounds of propriety. 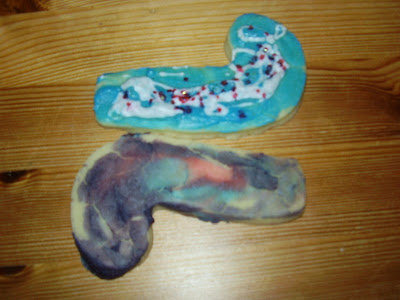 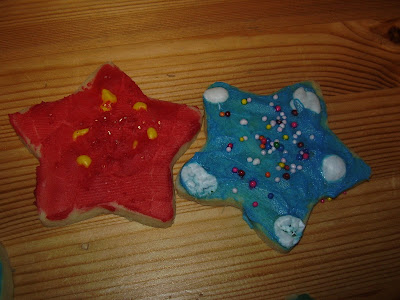 Even the Jimi Hendrix retrospective maintained its tastefulness. 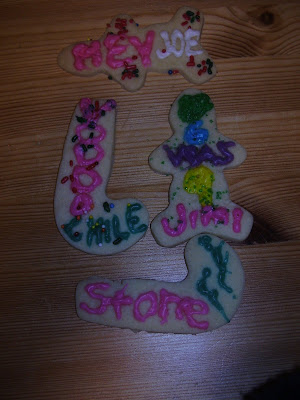 But then the disemboweling began and the zombie cookies started to amass an assault. 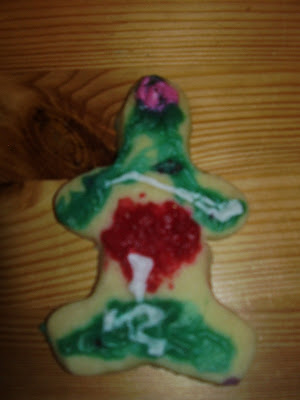 Eugene Hutz cookie was actually very cool and he even wore the green-striped trousers of which we are so fond.
(an explanatory note: due to a restricted colour palette, it was decreed that purple is now the new brown.) 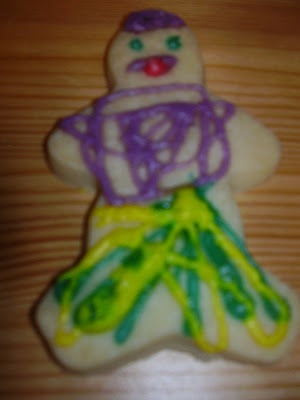 Thom Yorke showed up with Bjork on his arm, both beautiful freaks sporting signature outfits, red trousers and white frilly shirt on him, swan dress with white swan egg ankle bracelet on her. Charming couple, aren't they? 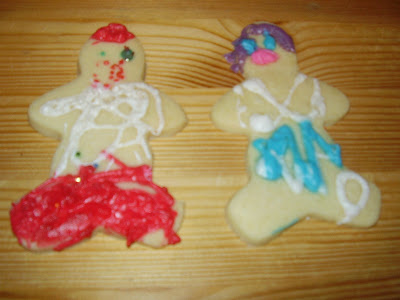 And then all Radiohead made an appearance:
L-R: Thom, future Jonny (hence the white hair), Ed, Colin, and Phil.
You will notice that poor Colin's head has exploded. We are uncertain if this is because he has just learned that Kraftwerk will be opening for Radiohead in Mexico and South America, or if there was a family spat and Jonny is now mournfully singing, I cut my brother's head in half. 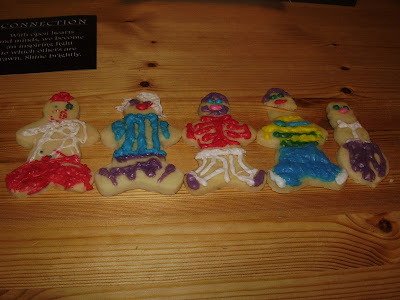 But oh dear, then things just got out of control and somebody leaped in and exposed Colin Meloy's privates! Just as I was putting a lovely argyle sweater vest on him too. Poor sweet Colin, who never did any harm to anybody, forced to spend eternity with his wee pink wiener dangling. Oh the shame! 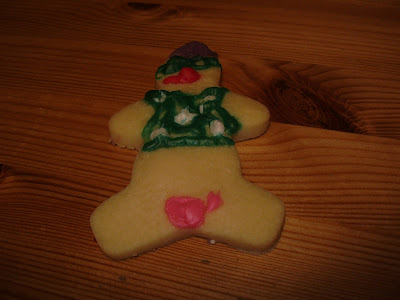 Posted by Barbara Bruederlin at 2:18 pm

Email ThisBlogThis!Share to TwitterShare to FacebookShare to Pinterest
Labels: annual shortbread subversiveness, you have to close your eyes and think of England when you eat some of these

I am shocked to see privates on a sugar cookie!

Thanks for the photos and the post! I had a good chuckle!

Hahaha! Those are great, made me smile. Especially shortbread Thom and his red pants. You zombies are just so creative. Tops to you!

Those are spectacular cookies! I'm impressed. They remind me a bit of Enrico Baj's Generals

You are such a naughty mum.

Meloy should get that looked at.

only in the zombie kitchen could Christmas shortbreads and Radiohead become one. Very funny cookies

I'm coming to your place next year, that looks like so much fun. A Bjork cookie? You've given me the best gift of all!

Who needs a rock star t-shirt when you can have the cookie. This could be the start of a fad.

My youngest will be envious that Bjork made an appearance in your cookie-baking! Nice job on the disemboweling, by the way. You don't see that every day, do you?

Decapitated Radio'heads'? Exposed Dec'member'ists? There really is something to be said about maniacal shortbreading... A brilliant concept here though to be sure. I really think you need to go into the holiday cookie business. I for one would pay a huge sum for a "bjorkie" or a "thomyorkie".

Merry Christmas to all in the Zombie house!

P.S. We will now have you to thank for the ability to Google Colin Meloy's wiener... Ah, the magic of Christmas.

I was rather shocked to see them myself, Wandering Coyote. I never dreamed they would be quite so pink!

I wonder if they make shortbread Thoms in the Yorke household, Al. I like to think that they do.

Now those Generals really are spectacular, Mr Anchovy. Ours are quite amatuerish in comparison.

Hey, I was trying to put clothes on the poor man, Dr M!

It does look rather inflamed and painful, doesn't it, John?

I would be terrified of what said professional analysis would say about the cookie makers, Kelly, probably something I would rather not hear.

It always becomes about Radiohead eventually, Gifted. Although this is the first year they have actually showed up in our shortbread.

Being a cookie decorator is rather like being a political cartoonist, I think, Dale, you have to find that defining characteristic. Fortunately Bjork will always have the swan dress.

Brilliant, Remi! They should be selling shortbread rock stars at the merch table, for those of us who don't really wear band tees, but who like cookies.

We know we have done a good job when we can impress a member of the Bubs family with our disembowelling, Bubs. Your family has such a long distinguished history with disemboweling.

Oh, the puns, the puns, Sean! Save us from the puns!
I have to admit they can be a little difficult to eat. I mean who wants to be the one to tell Eugene Hutz it is time to go? Not I!
You realize I now have an overwhelming urge to Google "Colin Meloy's wiener"? Drat that power of suggestion!

so....if my mom gets stranded in Calgary tomorrow she can stay with you right?

Poor Colin, that's one hell of a birth defect he's got goin' on... dude's hanging upwards, you know that's gotta hurt when he wears a belt.

Hmmmm do you eat the green argyle sweater before the pink wiener? Just want to know the correct etiquette in case I'm ever in the situation..

I love you guys.

Hee! Those are great!

Absolutely, Kelly, tell her to give us a call. As long as she doesn't mind being force fed turkey.

I wonder if perhaps Colin wears suspenders then,Michelle. He looks as though he might.
Merry whatever to you guys too, in your new place!

Merry Christmas, Blonde Family! Although there is no set etiquette on these things, I would feel more comfortable starting with the argyle sweater. No point in jumping right to the penis.

Merry Christmas to you and your brood, too, Deb! You shoulda been here to help out with the cookies.

They were way too much fun to do, Glassmeow.

Merry Christmas to you and your adorable family, too, John.

For Christmas I present to you the worst/best rendition of "O Holy Night" that ever graced the internet. Warning: do not drink anything while listening to this because it will surely come out of your nose. I nearly died laughing. (2:30 and 3:00 are the best parts)

It was actually tempting to try and get ahold of you you. Mom was suppose to come Monday, but they were afraid she would miss her connection and have to stay overnight. Actually next flight out they could have got her on was christmas day. Fortunately they never left Regina until yesterday, she got here last night around 7:30pm. You could have fer her tour odd cookies...haaa haaa

That is possibly the most horrendous thing I have ever heard, Ruh. I cannot believe it wasn't intentional.

I would have looked after your mom, Kelly, although I am glad she made it home to family eventually. We could have watched Radiohead videos together, your mom and I.

Holy shit, it's porno-cookies. You Canucks are weird.