I know she's married, but she can sing too 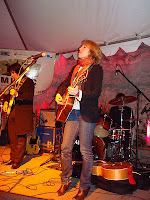 Martha has gone blonde now, but I'm pretty sure she was wearing the exact same boots when she rocked the stage at the Grand on Sunday night.

Boots, hair colour. Not something I would normally comment upon in a concert review, especially when you are talking about somebody who's got the pipes that Martha Wainwright has, but she is just such a striking and a physical presence, that her appearance really is a large part of her show. Besides, she's the one who started talking about the revealing shirt she was wearing, even though the rest of us spent the evening in mortal fear of an impending wardrobe malfunction. Damn, she is hot, though. Martha Wainwright is now encroaching upon Neko Case's exalted status of Woman I Would Do If I Ever Decided To Go Gay.

Musically, it's hard to find a peer to Martha's unique voice. She descends from rock royalty, of course, and she knows how to use her voice like a weapon - tortured and layered and so powerful that her voice is just shy of intimidating. And yet, Martha Wainwright comes across so natural and intimate on stage, like she and her band just happened to be passing by your neighbourhood and thought they would drop by. Since they had the set list made up and everything.

Some of that atmosphere at Sunday's concert had to do with the venue itself. Even though they had the seats set up at the Grand, there was no raised stage, just a designated stage area on the floor, and since we scored seats in the front row, we were pretty much eyeball to eyeball for the entire show.

The evening actually started with Brian Borcherdt from Holy Fuck opening with some of his highly personal brand of singer-songwriter offerings. Although he has a strong voice, it has a fragile quality to it that draws you into his world of lonely nights on the road. The songs he played us were a world removed from the experimental electronica of Holy Fuck, and while I was surprised by the vast difference, I was also charmed by their fractured beauty.

I realized during his set that Brian Borcherdt was precisely the sort of musician whom I wanted to interview for my upcoming article on Polaris prize nominees, and when I cornered him at the merch table after the show, he was extremely gracious to agree to an impromptu interview. And then I completely forgot to buy his cd (which I had fully intended to do!) and consequently I feel like a total schmuck. Brian Borcherdt, I owe you one.

Martha Wainwright's show was a nicely balanced mix of songs from her new album, along with those incredible ones from her debut recording. Tossed in were also some old standards (Stormy Weather) and a particularly lovely rendering of Leonard Cohen's The Traitor, where each band member took a turn at a verse.

It was a rather delightful show. Martha was chatty and playful, talking to us in both English and French (which is a pretty ambitious thing to do in Calgary), kibitzing with her band, and poking fun at her bassist husband. And somehow, despite the dramatic throwing back of her head to hit those powerful notes and the stomping of those killer boots, she was able to elude a wardrobe malfunction. Well done, Martha.
Posted by Barbara Bruederlin at 7:08 pm

Also, you are getting very good at this. Not that you were bad, but now you're better. Not that you had to be better, but... ugh, never mind. Good job.

Great review Barbara, I loves me some Martha although I will admit, I haven't heard her new one yet. Does that make me a bloody motherfucking asshole? I was just listening to 'When The Day Is Short' when I clicked over here.

I haven't listened to any new Martha in like..a long time. A really long time. Like..gah. And her version of The Traitor is totally mind-blowingly-awesometastically amazing, yes.

hahahaa, you're cute when you're inarticulate, Justrun! A rare and splendid occasion.

If you were just listening to When the Day is Short, I think that excuses you from BMFA status, Dale. Now, if you had been listening to Guns N Roses...

A beautiful version of The Traitor, indeed, BAP. It was a Leonard Cohen Dance Party going on!

She's got some pipes alright that one. And an impromptu interview too! Nice one! A platinum evening.

... someone has a girl crush

Oh man, I wish I had been there. Her voice is amazing. She has the ability to send shivers shooting through my spine with her phrasing and how she can bend a note ever so slightly. The reference to Neko Case fits although they sound nothing alike they both have an ability to envelope you with their voice alone. Great review as always.

Excellent review Barb. It's always wonderful to be in the midst of a bit of music magic. Your review got me thinking about Martha's recorded output though. I find it just doesn't have the strength that her live shows possess. I've seen Martha twice and both shows have been smouldering. Just absolute winners. But when I go back to the records, they just don't have the same impact. Curious as to your thoughts on this one...

Good work in the impromptu interview department. Brian is an amazingly diverse guy. (Go out and buy his new EP by the way. It's very ethereal and quite stunning. Very different than his Holy F alter ego.)

I have to imagine wearing that jacket helped keep the wardwrobe in check.

Sounds like a great concert. I have her new album, but I have not listened to it that much. I'll have to pull it out again.

And to score an interview on the side. Sounds ace all around. :)

And on a Sunday night too, Kees. Not what you expect to encounter on roast beef and laundry night.

It happens occasionally, Gifted, even to the most virtuous of us.

She has an amazing way with her voice, true story, Toccata. I think your comparison to Neko Case is valid - powerful, nuanced voices on both of them.

This was the only time I have ever seen Martha in concert, Sean, so I'm not sure I can fairly compare her live shows to her records. But I think it is true of most musicians that it's hard to reproduce the power and the magic and the intimacy of a live show.
Brian Borcherdt rocks! Do you remember The Remains of Brian Borcherdt? That video for Can't Stop Loving You? I'll bet he gets asked about that all the time.

She was wearing a jacket too, JustA! How did you know? Or is that the technique that you routinely use to keep your wardrobe under control?

It was a grand night, Al! I really don't know her new album very well at all. Must remedy that.

Well Done. As a die hard solo Borcherdt fan, I finally got to enjoy the (albeit way too short) live performance. Such a stark contrast with Martha's ridiculously powerful delivery and Brian's hushed intimate delivery.

Great venue as well, kudos on the interview as well - keep me updated on it.

I wish I had gone. I'm in love with her brother but I really should check her out too.

I agree, Smansmith, Brian's set was far too short. I'm going looking for Coyotes this afternoon, but hey, I may just have to buy the vinyl instead, what a great deal that is!
The Grand is a great venue - good acoustics too.
The interview will be part of an article that is coming out in the January issue of BC Musician Magazine. I'll post a link to the online version when it's published.

Too late, I'm going to write another one RIGHT NOW, Urban. You should have come to the show with us, Rufus was mentioned.