falling down on the job 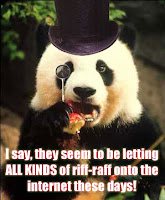 For someone who is now a big swinging dick of a so-called rock journalist, I sure don't know much. This post was supposed to list BTZ's favourite 8 albums of 08. Then I thought I should add a disclaimer about the albums that may very well have made the list, if I had listened to more of them, and to my chagrin, I realised that the list was at least as long as the best-of list.

Obviously one of my resolutions (provided I actually made resolutions, that is) should be to listen to more music.

Here then, is the
Zombie list of albums that may very well be contenders for album of the year except I haven't really listened to them properly yet:

Fleet Foxes - Fleet Foxes
Rock Fantasy - the Wet Secrets
Skeletal Lamping - Of Montreal
Flight of the Conchords - Flight of the Conchords
Rook - Shearwater
Los Manlicious - Hawksley Workman
Slimming Mirrors, Flattering Lights - the Awkward Stage
Chances - Jill Barber
Superioryouareinferior - Rae Spoon
In my defense, I will say that I have been looking for the Wet Secrets' album for a very long time. HMV don't know its ass from a hole in the ground.

Coming up, the actual BTZ's favourite albums the year list, with no apologies and no excuses.

Have you got any lists left in you?
Any recommendations for albums which I absolutely must buy?
Posted by Barbara Bruederlin at 9:25 am

Email ThisBlogThis!Share to TwitterShare to FacebookShare to Pinterest
Labels: album of the year that I haven't even heard yet, the zombie lists

ohhh I can't wait for the real list!
I love lists of stuff!

i feel so inadequate, I have never heard of any of those albums or bands

The only one that rings the most remotest of bells in that list is Flight of the Conchords. I've seen a couple of episodes of the show and thought it was pretty good. As you recently read at my place, though, I've been listening to a lot of gothic stuff and loving it.

Except, I just bought Alanis Morissette's new album and have to say I was really disappointed in it. While I thought the lyrics were still her usual stuff - which I totally love and always have done - the sound was really, really off for me. Too much techo-ish stuff that I had a hard time listening to. I'm disappointed that I'm disappointed.

List-loving nerds are the best kind of nerd there is, Stephanie.

Some of them are pretty esoteric, I'll admit, Kelly.

Flight of the Conchords are great, Wandering Coyote, and their songs are just as funny as the series. Except they are pretty much the opposite of gothic.
That's a shame about Alanis Morissette. While I like really techo, it's really disconcerting when all of a sudden people decide that they are now techno. Where's the transition?

Fleet Foxes escaped me too. We were living in a cave, apparently. At least I'm in good company. :)

There's nothing like a self-deprecating BSW of a rock journo.

I can only vouch for the Workman disc, which is solid but perhaps not mindblowing. Same as the other disc he released this year, Between the Beautifuls.

I'd say my fave of the year was Bonnie Prince Billy's Lie Down in the Light.

For Canuck fare, I fell for:

I don't have a single one of those albums. No wonder you're the rock writer and not I.

I had heard a few songs from Fleet Foxes' album, Al, but never the whole thing. Gorgeous harmonies, eh? It's nice in this cave, with people like you to keep me company.

I forgot that Hawksley had two releases this year, Remi. Conor Oberst's cd was good, did't quite make my top 8 list, but you know that Chad VanGaalen's sure did.
I have not heard any of Bonnie Prince Billy's new cd, must remedy that. Did you hear that Laura Barrett won a Bucky for Sexiest Musician?

My son keeps saying "have I told you about Fleet Foxes yet?" and, although he has, I've yet to really give them a "proper" listen. Now that I'm officially unempoyed, I'll treat my ears to some of these. Thank God I have kids (and you) or I'd still just be listening to stuff from 1994.

1994 was a very good year, Deb, don't underestimate it. But we do have to listen to our children when they try to get us to listen to new music. After all, isn't that why we had kids in the first place?

Help!!I got ABBA for Christmas...love it, but can't stop singing it!!

We've been listening to ABBA a lot since seeing Mamma Mia, too, Berni, not that one ever needs an excuse to listen to ABBA!
Basia is great. Her album came out in 07 (another one that I missed the boat on last year), so I can't include it in the list, but it's a good one.
HNY to you too!

ROOK! Roooooooook! Give it to Rook! But only because that's the one album I've actually listened to out of all the others on your list.
Oh well. Looking forward to ze actual list =)

I've only heard two songs from Rook, BAP, but they were gorgeous. I have some listening duties to attend to, I think.

I only have the one Fleet Foxes song, "Blue Ridge Mountain." If ever a song took a long time to grow on me, this was it. At first I passed it off as too Colplayish (a pretty damning indictment at my house). Yet, for some reason I kept giving it chances, and lo and behold, it became a favourite of 2008. As for the rest of the album, I couldn't say. Jill Barber's "Oh My My" was another definite favourite of 2008, but again, didn't hear much of the album (I rarely buy a whole album anymore. Nor do I usually order anything besides appetizers. Not sure if that's related.) Didn't hear anything from the Wet Secrets this year. Likewise of Montreal (but I've never been a big fan). Didn't hear the FOTC album, but I can imagine it's pretty witty, funny and so forth- I am a fan of those guys. Shearwater? No idea who that is. Hawksley Workman...oh. I thought I was a huge fan and I gave four tracks from that album more than their fair share of chances, but unlike Fleet Foxes, didn't really grow on me. After the Duhks and Kanye West, it was one of my biggest disappointments. I didn't know Awkward Stage released anything in 2008, but I'll have to check it out. I loved "Heaven is For Easy Girls" from 2006. Rae Spoon I also don't know. One of my favourite albums of 2008 was Girl Talk's Feed The Animals. My favourite tracks of 2008, besides the two mentioned above, were: Kathleen Edwards "I Make The Dough, You Get The Glory" Jack White/Alicia Key's "Another Way To Die," the Raconteur's "Salute Your Salution," Gnarls Barkley's "Run," the Clips "Space Kidz" and Beck's "Modern Guilt."

Whew! What a wrap-up, John! I knew that you were less than impressed with the new Hawksley Workman album (I actually haven't heard much from it), but it's a shame it never grew on you. I didn't realize that the Duhk's album didn't impress - they were great live. But that could have been contributed to the festival atmosphere.

We have to keep each other posted on our musical discoveries this year.