three things I learned recently in the urban assault vehicle: 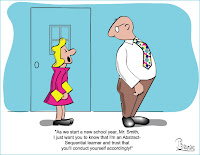 1. You can keep your driving gloves in the glove compartment. Glove ... Compartment. It all makes sense now, and it only took me three years of driving this thing to figure it out.

3. Rahm Emanuel is a great new addition to our commuting game of Who Would Win in a Fight. I mean, he was in the Israeli army or something wasn't he? He's some kinda bad-ass and he can kick your ass. Poor Don McKellar no longer stands a chance.

How do you improve your mind during your commute?
Posted by Barbara Bruederlin at 7:47 pm

Email ThisBlogThis!Share to TwitterShare to FacebookShare to Pinterest
Labels: tales from the urban assault vehicle, the universe craves randomness

Rahm Emanuel was in the Israeli military as a civilian, not as a kick ass commando. He does compete in triathlons and probably knows some wicked Krav-Maga, so I guess he still kicks ass.

i won't mention what liitle time i have during my commute

I'm pretty sure even I could kick Don McKellar's ass.

my commute is pretty short these days...I crank up some music and try to get there and back safely. Currently playing in my car: Yves Lambert et Le Bébert Orchestra.

Triathlons? He's even more intimidating now. You are a wealth of information, Bubs.
You hear all kinds of weird phrases when you spend time with my Resident Offspring.

I know, I know, you roll out of bed and walk next door, Kelly, you son of a bitch. Actually I can't really complain as I get to go back home again now after taking the Resident Offspring to school heh.

For me driving gloves are seasonally specific, Beckeye. Those days when it's not cold enough to think to put on gloves when you leave the house, but then you get in the car and you think god damn that steering wheel is cold, I wish I had some gloves. And miraculously, there are a pair in the Glove Compartment! (Yes, it deserves capitalization.)

So could I, I think, Dr M. Poor Don McKellar, he gets no respect and is often on the loosing end of our Who Would Win in a Fight game.

Music is an essential part of the commute, Mister Anchovy. Much time and consideration is spent around here in picking the right music. I'm not familiar with your choice - sounds intriguing!

All commutes are short in Yellowknife. But I still enjoy the short haul to and from the daycare with my son. In the morning it's us listening to the radio and trying to guess who the lucky birthday winner of a bowling party will be. At the end of the day, it's me singing along in my loudest and most annoying falsetto to Sharon, Lois and Bram while trying to keep my son awake long enough to make it home for supper. It used to work, now I expect sleep is an escape.

My commute is around 20 minutes if I pedal with only one leg 12 minutes with two. I wonder why it is not exactly half....... but who really cares!
My cellular phone/ MP3 player provides with stimulating music during the commute but unfortunately I do not heard the car horns but I do see the digital communication. Bastards......
I will have to rip the Leonard Cohen Dance Party for the next weeks commute and see what happpens.... Stay tuned.
Are the driving gloves NASCAR coloured?
Have the other half check into next years Grey Cup tickets.

Yours in Commuting
Bruno

I don't really improve my mind whilst commuting, as I found doing so once (with a book on tape) it didn't bode well for the other drivers.

Now I just stick with music. That has to be mixed up every few days, as my attention span is very short. :)

*headdesk!* So that's why my hands are always cold! The gloves are all in the drawer of the console table by the front door!

Of course Portland never chills to Calgary levels. A cold day is in the upper 30's lower 40's - F. But it's usually WET and that makes it feel colder. We keep telling ourselves.

Postscript. Today is beautiful and once I get done doing laundry, vacuuming and combing fleas outta cats I intend to get outside and rake up the end of the leaves so they don't sog into the lawn with the next rain.

John Doe - A Year in the Wilderness
Billy Bragg - Mr. Love and Justice
the three in the middle I don't seem to get to - think they're The Tripwires - Makes You Look Around, The Posies - Amazing Disgrace
I can't for the life of me remember what's in slot #5
and Nick Cave - Dig Lazarus Dig

With a ten minute commute, I don't get through the whole changer very often. Less often when I hit the repeat button for favorite songs :)

Because my commute is from my kitchen to the upstairs office, there isn't a lot of time for listening, but alas, if I had a commute I'd be listening to those Pimleur language tapes - spanish. Also the series of DVDs on physics which makes for great driving listening.

Oh, I haven't played the who would win in a fight game in so long. That is a great idea!

My god, John, that's bordering on child abuse! All I can say is, thankfully all commutes in Yellowknife are short.
Do you ever win the birthday bowling party, though?

He is checking into Grey Cup 09 tickets as we speak, Bruno. WHat about the Briar? It's here in 09 as well?
How do you pedal with one leg, anyway? And why?

Me too, Al, I've got a stack of cds in the car at all times, but even so, I have to rotate them to avoid fatigue.
Talking books are great for road trips across Saskatchewan, where you don't particularly have to pay attention, or even steer. Sort of the polar opposite of the 400 series of highways in Ontario.

A wet cold does get right into your bones, that's for certain, Glassmeow. But a steering wheel doesn't even need to be wet to make you miserable.
Dig Lazarus Dig is a great album, and a good commuting one too.

Physics tapes? Yes, I can see those making for some compelling road trip listening, Gifted. You don't even have to deal with cold steering wheels! Plus you get to keep your slippers on.

It's a perennial favourite around here, Justrun, one of those things that you say to keep the conversation going when you've got nothing in particular to say.

And people here wear driving sleeves. To protect their ARMS.Apparently the hands don't matter as much.

Driving sleeves? That's incredible, BAP, is that to protect your arm against the sun when it's hanging out the window? I guess your steering wheels don't get too cold...

Pfffft. There's no ROOM in my glove compartment for gloves. Silly idea.

I give up on trying to improve my mind. It hurts when I try and improve it.

Acchh, you guys don't need gloves there anyway, do you, Deb? Frees up the glove compartment for more important things.

I'm intrigued by what would go on a Leonard Cohen dance party album, though perhaps it should be called Suzanne Gets Down.

My commute is 20 minutes by subway. Today it was Hawksley Workman in the morning and the Rheostatics in the afternoon.

My choices tend to get faster and brighter as the weekend gets closer.

Hmmm, Physics tapes, yes that sounded so boring (although physics isn't boring, she admonished.) But for those kinder gentler morning commutes, have you ever listened to the exquisite Pink Martini, also Wilco and of course my absolute favourite clarinetist of all time, Artie Shaw, but he's good any time any place

That would be a suitable title, Remi. This mix actually has a lot of Cohen covers on it - Pixies, Jarvis Cocker, James. No Rufus Wainwright, strangely enough.
Hawksley would be good for a Monday morning commute, although I often just bite the bullet on a Monday and go with Jesus and Mary Chain.

Physics is absolutely not boring, Gifted, especially when it is being explained by a gifted communicator. Pink Martini are great, although I have yet to listen to them in the car. Wilco is great for a solo drive, especially Yankee Hotel Foxtrot. I can't honestly say I have ever listened to Artie Shaw though. *hangs head*

I drink heavily while commuting. Coffee that is.

I improve my mind during driving by creatively describing other drivers and pedestrians, my orations heavily laced with expletives. Multi-tasking.

I stick to water in the urban assault vehicle, JustA, partly to show off my Radiohead water bottle, I think.

Creative cussing is an art, Phlegmmy! There is something entirely sublime about a well seasoned rant while maintaining proper driving technique. I am quite certain you excel at both.