I don't know if I should blame Rahm Emanuel or Casey Affleck.

In yet another ill-considered commuting game of the kind that takes place all too often in the urban assault vehicle, I injured myself trying to flip off the Resident Offspring while pretending that my fuck-you finger was amputated at the knuckle. She had been telling me how Rahm Emanuel had special powers on account of his middle finger having been amputated in an Arby's accident, and how he used to flip off Barack Obama with the amputated finger.

And this reminded me of the film we watched on the weekend - the appropriately named The Assassination of Jesse James by the Coward Robert Ford. Like Snakes on a Plane, the entire plot is revealed in the title. And the only thing longer than the title is the film itself.

But I digress. In TAOJJBTCRF, Casey Affleck is all besmitten by Jesse James and wants to be him, right down to practicing his mannerisms in front of the mirror, including pretending that his middle finger is also cut off at the knuckle.

Somehow in my distracted state, a side effect of actually paying attention to the road, I got the two finger amputations confused and attempted to flip the bird while pretending the business finger was chopped off. Only I got the other fingers reversed and tried to keep them straight, and when my ring finger wouldn't stay straight, I pushed it back upright. Only to have pain shoot immediately through my hand and up my wrist to the elbow.

And it hurt all evening. Either Rahm Emanuel or Casey Affleck is going to pay, goddamn. 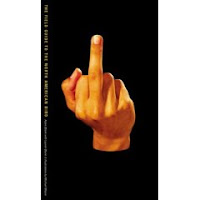 ~*~
In other news, Happy 40th birthday to my beloved As It Happens.

I grew up listening to this incredible show, which despite it's amazingly simple premise - phoning up people to interview them - has become the flagship show of the CBC, and rightly so. It's intelligent and ground-breaking, indepth and measured, sassy and irreverent.

And it doesn't hurt that the current As It Happens ladies are the sassiest beings to ever walk the earth and my personal heroes. Long may you rule the airwaves, As It Happens.

Posted by Barbara Bruederlin at 8:29 pm

Email ThisBlogThis!Share to TwitterShare to FacebookShare to Pinterest
Labels: ceebeecee, tales from the urban assault vehicle

I'd tell you to stop flipping people off but since you hate me now I won't.

Ouch. Flipping the bird is supposed to be deeply satisfying, not painful.

flipping people off - never heard that one before.

Ah, As it Happens. We are at one, zombie. I too grew up with it. Even remember B. Frum dayz. The show never fails to come up with the goods when it comes to wit and they always get interesting the angles on the day's stories.

BTW, did you happen to catch the explanation on "XX being so many miles from REading?" They said they would talk about it for the anniversary, but I don't know if they're dishing out the reasons.

This post made me laugh, and quite a bit at that. But I do hope all is healed today.

Whenever I give the middle finger, it has its own little pedestal, because my index and ring finger can't go down any further, so I don't think i could attempt your trick with a lot of pain. And from your example, that does not sound fun. ;)

I completely forgot that you are that guy I hate, Dr M! Let's kiss and make up now.

I blame you Americans for making it look so easy, Bubs.

They actually talked about the distance from Reading thing a couple of nights ago, Gifted! One of the writers, who was from Britain, had put together a story that happened in a little town just outside of Reading, and at the end he put "XX is 8 miles from Reading", which Michael Enright (I think) then read on the air. And everyone turned to gawk at him and the producer asked him "where the hell is Reading?" It became a running joke that then made it onto air.
The other night they even had someone go to Reading and interview the mayor.

I think it's rather grand that your f-u finger would have its own little pedestal, Al! It sounds so regal.
Mt carpal tunnel syndrome has healed itself, thanks.

Dang... it's like when you have a really good comeback and then reverse the words and sound like an ass. Or is that just me?

You do that too, Justrun? I am starting to suspect that we are related.

Here's hoping your middle finger mends. Or doesn't, as you prefer. You may get to have it amputated. :P

And then I could pretend I am Jesse James! I can see it now, Phlegmmy, and shall practice my train robbery technique in the mirror.

uhmmm don't you think you should like keep your eyes on the road when you're driving....


Especially since the word verification is:

Oh it was at a red light, never fear, Urban. I always keep my eyes on the road on Bonaventure (that road designed by a blind city planner).

I keep trying to finger a way to make you feel better.