getting right with Lucinda 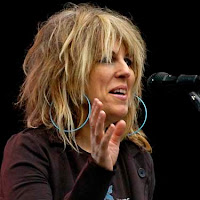 I am admittedly less familiar with Lucinda Williams' music than I should be. I mean she is an icon, after all, and any music lover worth their salt should be intimately familiar with the works of icons, but while the Spousal Unit immediately fell in love with her sound and quickly gravitated to her vast back catalogue, I just sort of flirted around the edges of her fandom.

So I wasn't entirely sure what to expect on Monday night, as we sashayed into the Jack Singer concert hall. I was fully expecting the audience to be largely skewed toward the older demographic and that was certainly the case, although there were surprising more younger people in attendance than I had anticipated. Definitely not the hipster indie kid crowd, though.

It was rather nice to be seated in the luxe environs of the Jack Singer for a change, instead of plopping my bum on the floor against the wall at Mac Hall for a change. And what awesome seats we scored too - fifth row, right in the middle. Very tony, and perfectly situated to fully appreciate the fantastic acoustics of the hall as well.

The Spousal Unit was suitably impressed when the opening band began within five minutes of scheduled show time, as he abhors being kept waiting indefinitely, as generally happens. We weren't aware at the time that Buick 6 are actually Lucinda Williams' backing band, but we were really happy to see them on stage as both the openers and backing Ms Williams. Because what incredible musicians they are.

The set that Buick 6 played as openers was largely instrumental - a tasty melange of sweeping soundscapes incorporating a vaguely surf sound (referred to by the Spousal Unit as Quinton Tarantino music), blues, Led Zeppelin covers, all played on a dizzying assortment of instruments - more guitars than I have ever seen in one place, duplicate drum kits, table steel guitars, and one enormous standup bass.

The overwhelming musicality and corresponding change of instruments continued when Lucinda Williams took the stage. A crew of three guitar techs swept onto the stage after each song to switch guitars. These are people who obviously take their instruments very seriously.

And serious was what I was expecting from Lucinda Williams herself, given the heartache and raw pain that is so prevalent in so much of her music, but while she did seem perhaps a little shy, slightly awkward when she wasn't holding a guitar, she was surprisingly upbeat and seemed genuinely happy to be performing that night. Most telling was the positively brilliant smile that she would flash after each song. She's really got to turn that smile on more often; she is absolutely charming when she does and it makes her look a good ten years younger.

Lucinda Williams chose songs that nicely reflected the diversity of her music. Yes, there were the songs about drunken bastards who broke her heart, about suicide and despair, but there were also bluesy numbers, some she said had been christened "hip-billy" and a little AC/DC for good measure.

The audience was highly appreciative, and I think genuinely touched when she came back for an encore with a cover of Ian Tyson's Four Strong Winds. I'm sure that was chosen specifically for an Alberta audience and doesn't get played simply as a matter of course. Evidently the woman two rows in front of us, who was headbanging during the entire show, enjoyed it immensely as well.

Posted by Barbara Bruederlin at 12:48 pm

Email ThisBlogThis!Share to TwitterShare to FacebookShare to Pinterest
Labels: concert review, educating myself on an icon

So have you gone over to the other side and become an all out Lucinda fan? I'm sense a titch of hesitation in your appreciation.

Okay, I'm a music fan not worth my salt. I've never listened (or um, heard of, oops) Lucinda Williams. I'll have to YouTube her to get a taste.

Glad the concert wasn't what you were expecting in a good way. :)

Glad you had what sounds like an excellent time there. Thanks for the thoughtful review (lol @ QT music!)

No, you picked up on the hesitation correctly, Gifted. Although I think she is a definitive figure in music history, I'm not liable to swoon over her as if she was the new Radiohead or anything. It's just a personal musical bias.

I'm really glad I went to the concert, Al. I think it was good for my musical edumacation.

I had to laugh at that too, Bridget! The Spousal Unit has a colourful way of expressing himself sometimes.

I'm actually into most anything rootsy but for some reason I haven't totally fallen for her, either. She's really, really good, but, for some reason, not my cup of tea.

It is nice to hear she did Four Strong Winds. It's a classic tune.

I'm also just getting into Lucinda Williams. I'm finding my latest purchase, Live @ The Fillmore to be great.

Sounds like a great show, I really hope she shows up in the TC soon.

i wasn't going to say anything but with a word verification of "chops" I just have to. I've always enjoyed lucinda williams when I've heard her, she played out here a couple years ago...this is a good reminder to go buy some of her music

I saw her at a free concert years ago and really enjoyed her.

I really appreciate her talent and her reputation, Remi, she's just not someone whose music I could listen to all night. Four Strong Winds was a really special touchm though.

You should check her tour dates, JustA. ANd I'll have to check into that for the SU.

Go! Buy music, Kelly! It's good for your soul.

She really appeals to a broad spectrum of people, doesn't she, Beckeye. She goes beyond country.

She told me she loves you too, Dr M.

I heard a few cuts from her newest CD and really liked them. But then again, she ROCKS.

She's pretty much got it going on, Dguzman!

I've never been a fan really but I'm glad you enjoyed the show. I once went to a Natalie Merchant concert and expected to slash my wrists halfway through to fit in but she was hilarious, surprisingly upbeat and told funny stories throughout. She even injected a bit of uptempo into some fairly dirge-y numbers.

Lucinda Williams, although she seems sort of shy and a trifle awkward at times, was actually a lot funnier than I expected as well, Dale. Which was a relief.