blue lights all around 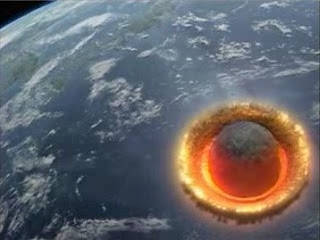 Those reports of a brilliant meteorite that was seen across three provinces last night will prove to be false, mark my words.

Because I know what it really was. It was my computer.

The blue light on the front of the tower started flashing rapidly last night and since we can no longer turn the computer off on account of the button being broken, I kept waking up from the mad strobe light effects that were lighting up the entire second floor of the house. I'm pretty certain they could see it from Winnipeg.

Today the computer store guru told me that there must have been some major action going on in the drive last night, so I did a big virus scan and came up with one itty-bitty cookie fragment, rated low risk. But getting rid of it made the flashing stop. Does this make any sense?

I'm taking the computer into the shop on Monday and they are going to remove the power button altogether and that will allow us to turn the computer back on with the point of a pencil.

The all-night disco is over, baby. You can take your bots and go home.

I haven't played along with Just A Cool Cat's Friday Random Ten for eons, so it's time to get random. Head over to his place and lay your list down on him; show a brah some love.

May your weekend be filled with heavenly bodies, as precious as Martian springtime. What's orbiting around your ears?

Posted by Barbara Bruederlin at 8:13 pm

I think computer tech people should practise a little showmanship. They should dress up like witch doctors and perform strange rites while they work magic on yr computer. This would be far better than what usually happens - some bored person, smirking at yr lack of knowledge, spending 30 seconds undoing what you couldn't fix after hours of trying. Just a thought.

I will now go back to my life's work - writing a dictionary of definitions for blogger's word verification "words".

Oh those damn cookie fragments. Bet it had a raisin in it... remember those idiotic California raisins? Oh how I wished for a kiln to cook those little claymation turd nuggets... why they were beloved escapes me.

Hell, Barbara. How's Thom supposed to send you Morse notes of love & devotion if you fix its blinking lights???

Those four words made me laugh SO LOUD..."It was my computer". You are the best writer ever. Seriously, I was trying to be depressed before I came here.

a friend of mine says the lights were some kind of space garbage...there's a conspiracy theory in there somewhere

I knew it had something to do with you!!

And this is why I read your blog - computer nonsense enlivened Thought about writing short stories?

I have a computer disaster recovery guy come in and do an audit on my computer and back-up drives. Once a year.

Here is what he says: it is not if but when your computer drive dies. Ditto back ups.

Check ups help you determine how much time you have left with your computer drive and everything on it.

Ha! You have chosen a very worthy life/s purpose, Remi. They will be naming a drink after you yet.
Yeah, my computer guru is a disappointing boring middle-aged woman who talks about her dog endlessly.

I never considered it that way, Mish, it must have been Thom, sending me his plans for saving the universe!
Were those California raisins actually beloved or is that just what the powerful raisin cartel wanted us to believe. I am skeptical.
And the Random 10? It's just a list of the first 10 songs that come up on your player. Simple yet somehow elegant.
I'm sending you a massive email today!

Stop trying so hard, Deb, being depressed should come naturally. Actually it's better to avoid it altogether, I find.

I always suspected that my computer was in cahoots with somebody nefarious, Mister Anchovy. This is further evidence.

Yes, there is no shortage of messianic complex around here, Dale!

Why thanks, Leazwell! They would have to be very short stories though, as I have a notoriously short attention span.

You actually do backups too, Gifted? You are the only person I know who doesn't just say they are going to. That is sobering advice though. I am now eyeballing my computer warily.

But what was the computer doing while it was up all night? That, I think, is the question.

I'm chuckling at the thought of a strobe-like affect going off on your second floor. But I'm glad the light went off, dead disco.

I have been trying to listen to Feist, but well, I'm just not taking to her. Other than that Tegan and Sara.

Better a dead disco than a panic at the disco, Al. We needed a sparkly ball hanging from the hallway lamp though.

I have one word for you: MAC

Once you go Mac you never go back.

Too much adjusting for me, though, Urban.

Hey this is pretty cool reading posts after the fact and finding out you were proved wrong! heh heh ;)

The coolest footage was that in the cop's car. It truly looked like something out of a movie.