theatre of the insane - Gogol Bordello 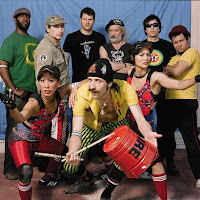 For a Tuesday night concert, it sure was packed. Maybe it helped that it was also election night, but from the wild enthusiasm of the audience, it was clear that people were here to experience the over-the-top madness of Gogol Bordello, rather than escape from the realities of Canadian politics.

Local punk band, Rum Runner, set the pace for the evening with a frenetic and high energy set, decidedly drawing on the Celtic punk influence of Stiff Little Fingers and the Pogues. We quite liked them; they had a tremendous amount of feel-good energy, even if their songs did all sound pretty much the same.

We waited forever and ever for Gogol Bordello, getting all excited at the false starts, as the background music ended abruptly, or as another guitar tech wandered onto the stage. But then just as we were starting to get annoyed, the crazy larger-than-life spectacle that is Gogol Bordello took the stage and launched into a no-holds barred gypsy punk debacle.

"What the fuck is going on, Calgary?" were the only words that Eugene Hutz spoke to us for the longest time, but really, there was no time for idle conversation. Gogol Bordello were too busy sawing the hell out of their instruments, putting on a wild circus of punk-tinged songs laced with Eastern European sensibilities.

Gogol Bordello are a huge band. Maybe not Polyphonic Spree huge, but certainly big enough to all but overpower the sizable concert space of MacEwan Hall. And they have a huge presence, complete with oversized stage gestures and enormous dramatic presence. There is nothing timid about Gogol Bordello and they put on one hell of a performance.

I don't believe I have ever before seen an entire audience jumping up and down as one being like that before. And I have never clapped along with the music quite so much before either.

The patented indie kids were surprisingly outnumbered at the concert, but in their absence we had Viking helmets and capes and tophats with feathers. A debate ensued following the concert as to who was more theatrical - Gogol Bordello or Of Montreal, whom we had seen in the spring. But while Of Montreal wowed us with glitter guns and backup dancers wearing wild animal masks, Gogol Bordello floored us with their awesome hats, armbands, and dramatic staging. Ultimately, we agreed to call it a draw, but we were all on side that nobody embodies a sweaty carnivale atmosphere straight from the Balkans quite like Gogol Bordello does.

If you ever get the chance at Gogol Bordello tickets, grab them without giving it another thought.

Posted by Barbara Bruederlin at 7:39 am

I am strangely intrigued by anything called Gogol.
And, you know, the Rum Runner band name doesn't hurt, either.

I don't know a lot of Gogol Bordello songs, but I love "Start Wearing Purple" enough to buy concert tickets for that song alone-- please tell me they played it!

It sounds like Vaudeville meets punk meets theatre of the absurd,

I can only assume there was an accordion involved. Har!

I can see how Rum Runner would resonate with you, Justrun, being a bit of a rum runner yourself, not to mention being a part-time pirate.

Rest assured, they played the hell out of Start Wearing Purple, John! Seriously, I think it went on for a good 15 minutes - craziness!

It was exactly like that, Gifted, how did you know? I'll bet you were that one in the Viking costume, weren't you?

There will be (and were) accordions, Mister Anchovy. You would have felt completely at home.

Can't say I'm a fan of their music, but "Viking helmets and capes and tophats with feathers..."

Aw, the Rum Runner is where Duran Duran got their start.

Other than that, this post is all Greek to me. Is "Gogol" a Greek word? It should be.

I bet you put your inner 6 year old boy to bed and were channeling your inner Gypsy.

There were some pretty incredible outfits in attendance, Al, far beyond the standard indie kid sweater vest and skinny jeans.

It's Greek by way of Siberia or some such place, Beckeye. Ouzo with perogies.

My inner gypsy is also 6 years old, Urban Blonde. Arrested development all round.

And there is only one of him, Gifted, so that's doubly impressive.

I really hope I get to see Gogol Bordello someday. It sounds worth it just to see the other audience members having such a good time!

Sounds like crazy fun! Glad it was a blast.

That was a huge part of the fun, Mel. Clapping along with the big guys in front of me!
Are you seeing Chad VG this tour?

It was wild, Dale! Reminded me of your Korean Bagel Lady encounters.

You know, I think the Gogol Bordello audiences are the wildest mix of spectators I've ever seen, and the sexiest.

They were a bizarre audience, Phlegmmy, and highly entertaining. Not all that sexy though.