I am not slamming the trades, but 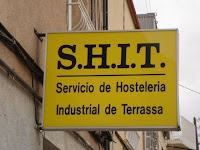 The plumber was at our house for 4 friggin hours today. Mind you, this included 3 trips to the hardware store, one time for a replacement main shut-off valve for the house, the original which snapped off as he tried to turn the water off. The rest were just because he forgot a bunch of stuff in the first trip.

Plus he kept getting lost in our house. Seriously. And it's not that big a house, but every time he tried to find the basement or the bedroom in which the en suite was located, he had to stop and ask me. This happened at least 5 times.

Now, I am not going to quote an electrician friend and talk about how plumbers are electricians with their heads caved in, but really what is there to remember except that shit flows downhill? Mind you, this is coming from someone who had to call a plumber to replace the guts in the toilet tank, so maybe I should just shut the hell up.

On another matter, I am so incredibly overdue on some memes that I owe people (and let's not even discuss those book reviews that I can't even remember the books for which I never wrote them), that it's time I pulled up a couple of socks here.

Tonight's meme is so long overdue that it's almost new again and comes compliments of a tag from the lovely and talented Westcoast Walker. Mr Walker wanted a peek inside my psyche

via my Top 25 Most Played Songs feature on itunes. Normally I would agree that this is an excellent way to get a glimpse of someone's personality or at least predilections, but in my case, it's not as telling as it should be. I do a large portion of my music listening on my endless commutes, during which time I play entire cds, and I generally slap my computer on random, so my Top 25 list is not as informative as it should be. That said, and with sincere apologies to Westcoast Walker, here be my Top 25 Most Played:

Jesus Christ on a cracker, I hear you exclaim, what's with all the Chad VG songs, and suspiciously all from his new release too? That, my friends, would be the easiest question I have answered all day (with the possible exception of which way to the basement). It's a fine fine album, and the release party is this Saturday night. I'm practicing.

What are your current Top 25 Most Played, and what deep dark secrets do they reveal about you? Come, let me pick your brain.
Posted by Barbara Bruederlin at 5:59 pm

Email ThisBlogThis!Share to TwitterShare to FacebookShare to Pinterest
Labels: gearing up for a Chad VanGaalen concert, good thing we don't get lose marks for handing in our memes late, time to call the real estate agent

Please give me that plumber's name... so I can be sure to never phone him! It sounds like the experience I had with the hot water faucet in the kid's bathroom a few years ago. Let's just say the plumber came in a truck with the incredible Hulk on the outside. Hulk he was not, incredible was the bill I had to pay.

25 most played songs? Hmmm quite the challenge for a title forgetter like me. I may have to try....

Every single plumber I've met wanted to be an electrician, but didn't think they could be certified... how interesting, never knew electricians had such a beat on their wannabes, hah!

But getting lost in your home 5 times? whassup with that? Dude must have been doing more than replenishing parts on his little sojourns out of your driveway, hmm.

25 most played songs? Seriously?
You like Bjork, I had no idea. That rocks my fuzzy socks off!

Wow, I'm suddenly feeling that I use repeat too much. My top played song has 200 hits.

I was just about to ask, what's with the Chad Van G?

did you ever hear of the movie "Zombie Strippers"..I have to rent it i'm sure

This guy was a retired fellow, Urban, and nice enough, but not exactly one to instill confidence. The electrician who just left this morning, on the other hand (yes this house is falling apart) was a crack tradesman.

I guess plumbing is the fallback career if you drop out of electrician school, Mich. It's rather comforting to know this is universal.
Oh yeah, Bjork is beyond awesome!

I don't use repeat near enough, Al, evidently. Mind you, I did just switch over recently, so I have time to get my numbers into the obscene range.

He's the man about town, Bubs!

I have indeed heard of Zombie Strippers, Kelly. Sadly, I understand it is rather like Snakes on a Plane, where the title is the whole thing and the best part.

I bet he'll vote for McCain.

You might notice there are 28, but there's a lot of ties for 8 plays. I have a thing for Canadians and covers and Canadian covers, what can I say. Sadly, we have no songs in common.

Your house was probably fine until you started cleaning it. That's why I keep mine such a mess. The dirt is the only thing holding it up.

Are the retired fellow's initials B. E. ? We had him in too after the incredible hulk. He didn't charge much but did make a few trips in and out. At least the thing stayed fixed.

I'm printing this out and will listen on my Napster thingy

plumbers are electricians with their heads caved in - too funny, but not to plumbers. Are you having to take out a 2nd mortgage on your house to pay him.

I gotta tell you Baarb. I am thoroughly digging the new Chad VanGaalen cd so I certainly sympathize with your obsession with it. As a Calgarian though (like Chad) you should know; is his last name pronounced Van Gawl en or Van Gay len? I do believe I may be mispronouncing his name.

I hate plumbers. I used to work for the facilities management department of a retail chain, so I had to deal with rip-off artists all day long.

Apparently, these are my most played songs on iTunes:

Don't you worry about there being 28, John, I can barely count anyway.
I just rewatched The Sweet Hereafter last weekend, and I loved Sarah Polley's cover of Courage. Nice choice.

I don't know his last name, Urban, but his first name was Bill, so it could very well be. I am heartened to hear that his work was sound, despite numerous hardware store trips.

Pretty much, Gifted, I think we are just going to ignore the rest of the stuff that is falling apart for a while.

Hey Curious Sean, we Calgarians pronounce it Van Gaylen, and he has never corrected us on it.
It is a great album, though, isn't it? I think it's a shoo-in for a Polaris shortlist next year. So glad that you are enjoying it.

Imagine my surprise, seeing Squeeze at your #1 position, Beckeye! Disco 2000 - what a great song, have you heard Nick Cave's cover?
And you know what, that Justin Timberlake fellow does have some damned catchy songs. I can't diss him, I'm sorry. I know you are disappointed.

HEY BECKEYE, THAT IS MY MOST PLAYED SQUEEZE SONG TOO. No, I am serious. It is number 6 on my iTunes most played, but number 4 on my last.fm charts. Okay, let's get married. hahahaha

I don't have i-tunes, so I couldn't tell you exactly what my most played songs are, but at the moment there is lotsa Echo & The Bunnymen, Patrick Wolf and Max Vernon on my playlist. And the Donnie Darko soundtrack is KILLER, dude.

I agree that the list is interesting but skewed due to the whole album thing. I'll have mine up later today after a caffeine injection.

What's amazing is how many of one's favourites don't make the list while other songs show up just because one couldn't be bothered to hit skip. Not that they're bad songs or anything. They're just not songs you'd want on a top 25.

Ahhh, sympathies. It's a bitch having anything done. Haven't heard of such an airhead plumber before, though.

Wow, you really seem to like this "Radiohead" band. I should probaly check them out at some point in time.

The plumber we have is awesome, he comes over one time to survey the needs (for free), gives an estimate, and comes back to fix things.

You should have called Joe the plumber.

Ruh - I have just injured myself rolling my eyes at the looney Squeeze fans who come around here.

I have to admit that I don't know the Donnie Darko soundtrack, BAP, but I can sure get behind Echo and the Bunneymen right now. P Wolf is a nice foil to that, too.
Happy birthday to you, Ms BAPpy!

I couldn't agree more, Remi, itunes almost never plays my favourites and I am too lazy to skip as well. I have yet to try out Genius to see if that makes a difference.
Looking forward to reading your list.

So far it seems like the work he did is good and solid, Phlegmfatale, just don't ask the dude for directions anywhere.

Wow, who is this mythical plumber of which you speak, JustA? Are you sure you didn't just dream him up?

I think your plumber must be a relation to the roofer we had this summer. What a disaster that was.

I hear the words roofer and plumber in the same sentence, and I shudder, Toccata.

It's really purdy, Jen! It's my Hallowe'en costume!

Great list Barb - I sort of obsess over my own from time to time and take it to be some barometer of my inner landscape!

Mine seems to be more of a snapshot in time, Westcoast, I think because I do so much more music listening elsewhere. But I am interested to see how it evolves.