zombie toys that lurk in my closet 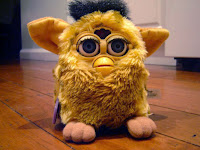 I was noodling about in the spare room closet today, when I inadvertently knocked over a shoe box that resided on the top shelf. As I reached up to gather up the spilled contents, I could hear someone talking to me from deep within the closet.

Closer inspection revealed that it was a Furby, hidden there several years earlier by the Resident Offspring in an attempt to kill off its evil spirit.

It was creepy enough that this thing was still mobile after several years in the back of the spare room closet, and more than a little disturbing that it kept saying "ooohhmm, me hunnnngryyy", but what really freaked me out was the fact that it contained no batteries!

It's still up there, talking. I'm staying out of that room until it's dead for real.
Posted by Barbara Bruederlin at 8:23 pm

Email ThisBlogThis!Share to TwitterShare to FacebookShare to Pinterest
Labels: they were bad enough when they weren't undead

Hey, maybe your Furby can star in one of Bubs' horror films.

Even worse than an undead Furby is a demonic Teddy Ruxpin with a Skinny Puppy tape permanently jammed in his player.

God I'm hoping you didn't get that thing wet or feed it after midnight. Did you?

That is just wrong, man. Why don't you chuck it in the bin?? I couln't sleep in a house with a Furby in it.

Thanks for scaring the crap out of me this morning.

That's what you get for making fun of stupid Demons. Consider yourself possessed.

I think that Furby has starred in one too many horror flicks already, Beth.

Have you been hiding in my closet too, Dr M?

And no doubt the tape is slightly warped so that it plays all distorted, Westcoast, although with Skinny Puppy, it's kinda hard to tell.
Ka-ching!
JK, I like Skinny Puppy.

I don't recall that we did, Bubs, although the Resident Offspring did inadvertently make it dance when she was trying to get it back into hibernation. I think that's what sets off the new generation of Goulies.

It seems to have stopped speaking sometime during the night, BAP. I fear it is plotting a murderous rampage.

I'm just glad I survived till morning, Beckeye. At least you've got a few thousand miles between yourself and the thing.

You could be right, Urban. I guess those demons weren't so stupid after all. They must have been taking down names.

Don't be afraid, those Furby's are just wussy repurposed Gremlins.

Maybe it's the fact that I was watching a horror movie last night, but that is a pretty creepy story and I am pretty creeped out. That things is alive and hungry!

Yikes! That is way creepy! We never had a furby, and now I'm glad.

Those were shitty cars, JustA, no wonder they were repossessed.

It's settled down now, Will, but I think it's just waiting until we all go to sleep.

You're lucky you had a boy, Mel!

That freaked me out a little.
You know, like when you haven't thought about something creepy in a really long time and then you do and you're like, holy crap, what were we thinking?

Really! Who thought it was a good idea to make a talking, dancing, eating toy that will not die, Justrun?

That is one creapy looking stuffie. I think I have an old smurf lurking around, maybe the two could get together and mate. Better yet send the possessed furrball to the geniuses that locked Allison out of her email.

omg ayla had one of these yrs ago and it ended up in the closet as well bc at night it would make noises and she would near shit the bed!

I think breeding them is only a advisable if you then follow Jen's example and sell them to unsuspecting ebay addicts, Toccata.

That's a rather brilliant idea, Jen. I'd just be worried if if started talking whilst in transit and the post office called in the bomb squad.

oh man I really wish this was a joke...but I know it's not. Arm yourself accordingly!

It's quiet right now, Gifted. I think it's gone back to hell for another thousand years.


I've hung garlic outside the closet door, Moxie. That should work, right?