you turn me on, I'm a radio 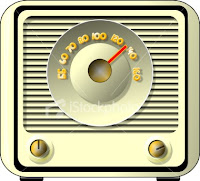 I've been finding myself deeply immersed in on-line radio this weekend.

My fascination with radio actually hearkens back to my early university days, when, working for an agricultural chemical company for the summer, I would perplex my coworkers by tuning into CBC radio in the old Suburban that we drove around to get to our field studies. They didn't quite know what to make of a 19-year-old who didn't listen to top 40 rock or country.

The latest incarnation of my radio love affair actually began when the Spousal Unit bought a new truck recently which had an XM satellite subscription in the selling features. We've since installed XM Radio into our computers. It's a nice break from itunes. I love that you can glance at the presets list to see what is playing, or better yet, to see what else is playing.

My newest infatuation is NPR, who will be streaming the audio for the Radiohead Santa Barbara concert at noon on Monday and then will be archiving it. And that's pretty awesome, but that's just the beginning of the goodies that NPR has to offer I have discovered. Why did nobody ever tell me that NPR is such a goldmine? My favourite discovery so far is All Songs Considered, where musicians guest DJ, chat with the host, and share some of their favourite music. Thus far I have listened to both Thom Yorke and Colin Meloy act as guest DJs, and plan to listen to sessions with Portishead, Ray Davies, Lily Allen, and Tom Verlaine. 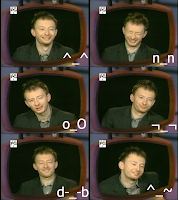 I've also heard a really frank interview with a chatty and witty Thom Yorke (?), and the US premier of Jonny Greenwood's BBC-commissioned Popcorn Superhet Receiver concert. Right now I am listening to a new Silver Jews song. You should definitely check out NPR.org.

Of course this also reminded me that I haven't been listening to CBC Radio 3 lately, so I popped over there and discovered a new Grant Lawrence podcast, with fresh music from Vancougar, Mother Mother, Final Fantasy, and Chad VanGaalen, among others.

With the belt-tightening efforts that I am attempting these days, I'll be curtailing my concert tickets and cd purchases somewhat, so I am definitely going to be spending more time with my ear to the speakers.

-+-+-
In the shameless self-promotion category, I urge you to head over to the Bookworm Collective blog, where I have just posted my book review of Mark Haddon's A Spot of Bother.

Now I'm heading to the library to pick out a new book to accompany all this radio listening. Any suggestions?

Posted by Barbara Bruederlin at 10:03 am

My next car radio will be XM, for sure.

Currently, I enjoy Rhapsody and Pandora on my PC.

A Spot of Bother sounds good -- haven't gotten around to Curious Incident yet, either...

Have you ever read I Know This Much is True by Wally Lamb?

See if they have a copy of "The Raw Shark Texts" by Steven Hall. I loved it.

NPR has tons of great things archived doesn't it? I'm a little more 'in tune' with radio now with the iTunes radio function. Why don't I have more time?!

My best friend had XM in her new truck, but she ended up canceling the subscription about 3 months in. She said that every once in a while, she'd hear a song she hadn't heard in a really long time and be like, "Wow, cool!" but then she'd hear it every day for the next 3 weeks. Apparently they have just as much repetition as the top 40 stations.

I haven't listened to CBC Radio 3 in a while either, BBC 6 Music is my favourite and always wins out.

I'm in the process of making cds for my commute into work now. No XM radio in my car. Just lots of mix tapes.

A Tree Grows in Brooklyn! :) I'm pimping that out since I first discovered it.

I've taken NPR for granted because I used to listen to it so much.

I have read I Know This Much is True, Volly, as well as She's Come Undone. Enjoyed them both immensely, although I couldn't for the life of me give a synopsis of either right now.
What did we do for music listening before PCs?

I'm waiting for them to come out with iclone, Dale, so that I can simultaneously listen to everything that needs listening to. Why didn't you tell me about NPR before? I blame you for my lack of education in these matters.
I shall check into that book next time, I just googled it and it sounds skill! Thanks.

I can see that happening, Beckeye, I think you need to have several stations on preset so you can flip around. I stick to mix cds in my urban assault vehicle.

Right! BBC6! I recall you mentioning how good it was, Al, and have been meaning to look into it. My next quest!
I may be able to help with some stuff for mixes, because you are going to need some new stuff. Coming right up.

You could have at least told me about it first, Dr M! Sheesh, and here I thought NPR was all Prairie Home Companion, but no. It rocks big time.

I am as much a lowercase radiohead as you are an uppercase Radiohead-head.

For intelligent talk radio BBC Radio 4.
For interesting music, music documentary and weekly music shows, BBC Radio 2 which used to feature my beloved Humphrey Lyddelton on Monday Night's Best of Jazz (sniff!) .
For contemporary stuff BBC Radio 6 although the DJ's can be irritating.
BBC Radio 7 features much of the old archive of British radio comedy, if you like that sort of thing.

Sadly, CBC radio has gone downhill in recent years. The morning Sounds like C. program is drowning in its own banality. This country isn't that boring, just as Peter Gzowski.
I like contemporary the music, arts, pop culture programming but can't stand the egocentric personalities like Jian Ghomeshi and Sook-Yin It's-All-About-Me.

And I despise Stuart MacLean, whose glibness and cliche delivery are a national disgrace.

As It Happens, Sunday Morning, Ideas and the Current are my kind of CBC, as are some of the intelligent Sunday afternoon programs and hosts like Eleanor Wactell.

I recently read a book called 'Round Ireland With A Fridge. This guy ends up betting, while completely wasted, that he can hitchhike around the perimeter of Ireland with a mini-fridge in a month. It is ludicrous, but hilarious.

I was just walking around my new 'hood and someone had left a box of books out for people to take, and it was sitting among the usual bad romance novels and occasional mystery paperback. I doubt I would have ever seen it otherwise, haha.

It's a good thing NPR is giving you a break from all the Radiohead, with more Radiohead.

I have a nostalgic attachment to radio, but regrettably find most local radio to be too generic and irrelevant. I do like the recent makeover at CBC Radio 2, so far so good.

I am with you regarding NPR's All Songs Considered - no self respecting music geek should be without this program - I download the podcasts and listen to them in my car when all else fails.

Malaysian radio makes me miserable. It's an awful institution. I should start my own bleeding station.

Have you ever read, um, anything by Haruki Murakami? Please read Haruki Murakami. Don't worry, it's in English,and it's totally nuffink like all that fad Asian Lit craptasticness.

I subscribed to XM for about a year. I really liked it for roadtrips, but I found when driving in the city or when at home, being lost in another decade I suppose, I played CDs. I recently gave up my subscription because I didn't listen enough to justify it in my own mind.

Ahem, I may have mentioned that and MPR thank you very much.

I'm jealous of your XM. The few times I've heard it I've totally loved it.

There are varying degrees of radio/Radio-head, Gifted.
I agree that the best shows on CBC are ones like As It Happens, the Current, Dispatches, but my heart is sad that you don't like Sook-Yin. I think she's kinda adorable.
Stuart Maclean, though, has completely lost it.
I need to check out some of your BBCs.

That's brilliant, Ruh! What a great premise for a book, and what a fantastic way to happen upon it.

haha I'm back on NPR now, John, listening to the Radiohead concert and getting all nostalgic.

I haven't yet listened to the new programming on Radio 2, Westcoast. I know some people were concerned about the changes, so it's good to hear that it's working well.
All Songs Considered is chock full of goodness. Will you be downloading the Radiohead concert podcast? It'll be great for commuting.

I don't know Haruki Murakami at all, BAP, but I shall be googling. How can I pass up a recommendation like that?
Most Canadian radio is really lame too, but we do have some great campus radio and fortunately, the CBC.

I tend to listen to cds as well, Mister Anchovy, or put my own music on random. Although I do like XM for hearing other music. The Spousal Unit listens to it all the time, though.

You did, JustA, but you really should have stomped your little foot if you really wanted me to pay attention.
Consider me to be hanging my head and learning my lesson.

It's pretty crazy, I agree. You are welcome to borrow it sometime. Also, I've always heard rumblings about how great NPR is, but I think after your comments I may have to check it out further.

Gifted Typist, I don't like Stuart MacLean either and I thought I was the only one!!! Thank you for reassuring me that I am not the national disgrace.

As an "old schooly" radio fanatic from way back I was thrilled to see the comments your piece elicited. Listening to the radio can often times be a torturous affair, especially with the present state of terrestrial stations in our country and perhaps to a greater extent south of the border. But a day does not go by that I do not thank a higher power for CBC 2 and Radio One. (Driving would otherwise be a slow hell.) And yes I must concur. Listening to NPR borders on sublime. Whether it be This American Life or streaming a concert of music of a favourite artist. I am convinced its programming like that which keeps our imaginations a little more fertile and our spirits perhaps a little more alive.

Thanks so much for the heads up on the Radiohead show. That one was truly special. It shall be a pleasure to hear it again.

You have made the Resident Offspring very happy with your views on Stuart Maclean, Ruh, which she shares wholeheartedly.
I will borrow that book sometime, thanks. And I do highly recommend NPR - there's some great stuff there.

I will always have a spot in my heart for CBC, Sean, it was my tv back when I didn't have one and there was no internet, it kept me company while I wrote my thesis, and the As It Happens ladies are my heroes and will always be.
Glad to hear that you are a long time radio fan too, and I agree that it is worth celebrating, despite the myriad of lame and plain awful offerings.

Is it possible for any human to be more fetching than Thom Yorke?

Agreed. He is utterly fetching in his twitchy little self, Phlegmfatale!