In honour of the new year, I have just converted my music to itunes. Again. I tried once before, a year or so ago, but it didn't take. This time I will stay away from any buttons which look suspect. Nineteen hours it took to convert all my music over from WMA to MP3.

The first song I chose for the inaugural listen was Radiohead's Gagging Order, and then itunes randomly chose a Thom Yorke song for the next one. I think we are going to get along just fine.

Although yesterday was my first official day of being a lazy unemployed bastard, today it actually feels real, with the Spousal Unit heading back to work and the Resident Offspring to school. It feels pretty great, to be honest. I got a big grocery shop done and those idiots mislabeled the big slabs of salmon as pork shoulder, so I scooped up a beautiful salmon half for six bucks. No I don't feel guilty; I spend enough damn money in that place.

I am devoting this morning to finalizing the Lazy Unemployed Bastard List, that document that divulges all that I intend to accomplish during this period of 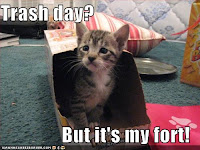 having no real purpose in life. Some of the jobs are mundane and involve much sorting through of cupboards and closets and turfing crap found mouldering therein, while others are long overdue and involve finally doing something about that pile of crap in the basement that I started sorting through last winter.

Some of the chores are scary and may unearth larger issues (ie determining why the bathtub is leaking), while others should be really fun (ie replacing the ceiling lamp in the dining room). Between cleaning out my email inbox, revamping the home filing system, teaching myself guitar, and breaking into the freelance writing market, not to mention upping my daily exercise, I am going to be so fit, fabulous, organized, and famous, you won't be able to stand me.

Lazy Unemployed Bastard files trivia item - the soundtrack in Taxi Driver is offputting and detracts from the film. Yes or no?

Posted by Barbara Bruederlin at 9:55 am

I hit that button the other day and it deleted a ton of vacation vids and pics. Grrrrrrrrrr.

I'll take some salmon with my whine.

Woo hoo welcome to itunes! :) I have the new Final Fantasy if you want to add more to your collection.

It's fine to be lazy and unemployed, but don't become one of those crazy lolcat ladies.

Yes, you go into these things with the best of intentions until you discover that the frame around window with the peeling paint is rotten and the wood all around that area is bad and underneath too ... it's almost worth just watch the paint peel rather than touching it up...

You know, I tried that guitar thing when I was deciding on a different job. Good thing I didn't have to entertain (that said somewhat loosely) anyone but the cats. We all agreed I had better find a more acceptable and less discordant pastime. I think that was the only time they didn't follow me around...

Welocme to the ranks of the stay at home bastards.

I thought that button only existed on my laptop. Damned sorry to hear that your version has one as well, JustA. I guess you'll need another vacation to take another crack at some photos.

Oooooo sounds lovely, Al, I've heard a couple of tracks and they are pretty magnificent. I am working on some stuff for you currently.
Sorry to get you all fish cravy, now that it's off the menu.

I'm afraid I've always been a bit of a closet crazy lolcat lady, Beckeye. Not working may just push me over the edge into full-blown i can haz cheezburger territory.

Sounds like you speak from experience, Gifted, and the scary part is now I am eyeing up the peeling paint on the window sills with trepidation. So, thanks.

hahaha, you've planted the idea in my head now, to practice my fledgling guitar skills on the 300 little kids who live next door, Kathy. Maybe it will work on them as well as it does on cats.

I am honoured to be a fellow bastard, Dr M,. I know I have big shoes to fill, but it's something I have aspired to for some time now.

Welcome to itunes. I have no doubt whatsoever that you will love this software. Be forewarned
though, it does develop this artificial intelligence as it gets to know your listening habits. You'll notice the little things at first and then someday it will play something you were thinking about only moments earlier. You can mitigate this by wearing
an aluminum foil hat though, so get one of those. ;-)

You mentioned the Taxi Driver soundtrack at the end of your post and I have to say I really do enjoy MOST of it. The end of the disc seems to fall a little short
for me but for the most part it never ceases to transport me back to that deeply affecting and gritty film. Martin Scorcese
dedicated the finished movie to composer Bernard Hermann when he
died just after completing the score in 1975. So my vote is
for it accentuating the film. It just makes the whole thing feel large and even ominous. Like New York City itself.

Tell me though... What is your all-time favourite soundtrack? The Ghose World Soundtrack would get my vote.

I now look for my supermarket's labeling mishaps...I have the same attitude about the whole thing that you do. Love it when they screw up and I get a couple of tenderloins for the price of chuck. I'm like the woman running out of Ikea...."start the car, START THE CAR!!".

I have a few of those scary chores to do...they're really playing on me as I'm scared of what they'll unearth too. So I'm ignoring them instead and when the place falls down around us, we'll move on.

Unemployed John files trivia item- I've never seen Taxi Driver. I assume I'm talkin' to you, but I'm not sure.

Ah, man. Delete functions should always ask three times if "you are sure you want to delete that." Then, it should delete it but also secretly keep it in a stashed place for a good six minutes to six months, depending on the importance of the item, which it will know, and then throw it away if you haven't looked for it by then.

But the good news is, you have iTunes now and plenty of time to make me playlists and/or mixed cd's. :)

itunes and I are still sniffing around each other's nether regions, trying to figure each other out at this point, Sean, but so far so good.
I never considered that take on the Taxi Driver score before, but I can see where you are coming from on that. I still found it to be distracting, though. I guess I have always thought that scores should take the back seat in a film.
My all-time favourite score/soundtrack is Local Hero, which is by Mark Knopfler. It's stunning.

hahaha I can just picture you hotfooting it out of Safeway, Deb, mispriced meat in hand! It makes it feel like the universe is fair, or something.
When it comes to home repairs, I'm thinking of taking the run when the place caves in approach too. And I can certainly understand why you would want to leave well enough alone, you certainly haven't had any good luck with your place.

Well who else would you be talking to, John, I don't see anybody else in here. That was a pretty classic scene!

I want you to design my next computer, Justrun! You know what I need, obviously.