things to remember on October 14 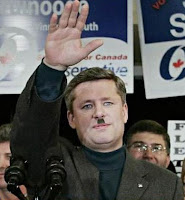 - Stephen Harper campaigned to legislate fixed election dates as one of his primary mandates during the last election, a move intended to stop prime ministers from calling snap elections whenever the political tide was in their favour. Yet he has now ignored his own legislation and is calling an election one full year early.

- Stephen Harper swore not to touch income trusts during his 2006 election campaign. Yet it only took a few months until that all changed, and billions of dollars of investments were wiped out by new regulations.

- Anybody want to discuss cuts to Arts funding?

- Stephen Harper may not, in fact, eat kittens as we originally suspected, but he sure does want to be George Bush.

Okay, I made that last one up, but for a minority government leader, Stephen Harper sure has broken a lot of campaign promises. Here's someone who is keeping tabs.

Stephen Harper scares the crap out of me, and one of my biggest fears is waking up to a conservative majority government on October 15. I am tempted to urge everybody who is able, entitled and capable to vote Anybody But Conservative, but obviously we need a more concerted approach or we're just going to scatter our votes.

I'm open to suggestions. Who should we support? I will gladly go with the majority opinion in order to topple this government.

Posted by Barbara Bruederlin at 4:39 pm

Email ThisBlogThis!Share to TwitterShare to FacebookShare to Pinterest
Labels: bring down the government they don't they don't speak for us

On that basis alone I think we might want to consider Jack Layton or Elizabeth May. I honestly could never bring myself to vote for (Mr. Dithers) Stéphane Dion.

I'm with you on this blogger contingent. Let's make our votes count!

Y'know Barb, posting that pic runs you afoul of Godwin's Law. Not good.

But besides that, I see no alternative. Sure, if you're a red, then Taliban Jack is your man. Dion is spineless and totally devoid of inspiration. And besides that, his (I believe) false mantra of human induced climate change simply seals the deal. Against.

Proportional representation is the way to go. Which we will never move towards, but hey! it's a pipe dream.

I'll be spoling my ballot this time around, with some choice words for the DRO to read aloud to all scrutineers present.

Oh and I forgot to say... a minority Harper government I can live with. Then we get a Lib leadership thingy going.

And that's from a dyed in the wool, bleeding heart, Trudeaupean speaking.

I don't know the guy or what all this is about, but I read the words "topple" and "governemnt" and it sounds fun, so count me in.

I wouldn't be surprised if Alberta goes completely blue once again. Bastards.

For some reason, I can't get the Rheostatics' Bad Time To Be Poor out of my head.

Funny that the party which advertises itself as being the voice of the average Canuck (whatever the heck that is) is also the party that will do the most damage to the lower and middle class if it manages to get a majority.

Why help people when you can help corporations? What have the people ever done for Mr. Harper?

Oops. Nearly forgot. They voted him in once (and hopefully just once).

If I lived there I'd be all up in the Green Party of the NDP's. I'd be on Haper's shit list. Vote out the bastard.

I'll be voting NDP, but I'm concerned about Dion, that people in his own party don't seem to back him, which is defintely worrisome that a strong Liberal vote might shift to a Conservative one...and according to the polls that where things are headed. What we seem to forget in election times is that its not just about the personality of the individual running, its about the party as a whole too.

I like Layton and May as well, Sean. Sadly the NDP and Greens don't stand a chance in my riding. Wouldn't it be great to have a blogger riding, instead of a geographical one? I mean, we live here anyway.

Oh well, I'm not really trying to make a valid comparison to Hitler there, Teddy, I just liked the picture.
I have a really hard time backing Dion as well. Firstly I feel like he's unproven, and secondly, he sure did cave to Harper a lot. Not a good start.
Harper is trying to quell our fears by telling us to expect a minority conservative government. Don't trust him.

Glad you're on side, BAP, I will be sending the revolutionary handbook your way posthaste.

Hopefully just once, Remi, but alas I am not holding my breath on that one.
Have you been listening to As It Happens where they are asking people to suggest theme songs for the political candidates? The Resident Offspring suggested Martha Wainwright's Bloody Mother Fucking Asshole for our PM.

We need you up here, Dr M. If you moved here now, do you think you could vote next month?

That is certainly true, Al, it takes way more than the leader to run the party. However, I still wish that Dion had a stronger presence. With any luck at all, the NDs will take the swing vote. Not that I'm holding my breath.

Well for probably the first time in Canadian and American history I can say that though I dont' know who that man is, I know something of how you feel.

Another one: the Atlantic accord which he promised to keep then conveniently changed when in power.

He'll take it though.

I'll vote for Layton, too. And just to echo what everyone else has said, I'd consider Liberal if it wasn't for Dion. What a collosal mistake he is for that party. A mistake, unfortunately, that the conservatives will capitalize on.

You do indeed, Justrun, as that man is George Bush lite. Scary, isn't it?

Yeah, good points, Gifted. Keeping Harper honest and accountable is probably the most we can hope for at this point. Of course we're swimming against a blue tide out here in Alberta, but I'm counting on the rest of the country to make a stand.

They will indeed capitalise upon it, John although what the conservatives thought they were accomplishing with the puffin pooping on Dion's head in that ad spot is beyond me. Shame they pulled it so early.

They ALL scare me!

I actually had some hopes for Dion initially and I don't think he is as bad as he has been portrayed. That said, I'm thinking we would've been better off with Ignatieff or Rae leading the libs.

And yes, BMFA is a fitting song. I just witnessed a commercial where the grand automaton talked about playing music with his son. That was it. While I usually abhor too cute internet abbreviations, it was a serious WTF moment. I'm supposed to vote for the guy because he plays piano with his son? I'm sure they finish it off with a heartfelt handshake, as well.

Is it too late to seek political asylum in someplace more rational, like Finland?

Politics can be a scary business, Bridget.

I'm with you, in that I had hoped for something better from Dion, Remi, and who knows, he may yet surprise us by showing some stones.
Those warm and fuzzy makeovers that Harper is attempting are so obviously spun that I have a hard time believing that anyone would fall for them. But I guess one should never underestimate people's gullability. Count me in on the Finland migration!

Wow, it's like the Canadians are taking a page out of American politrix.

I'm going green Barb. I want a sign on my lawn. In fact I want two signs since I'm on a corner. In actual fact there are a lot of greens in our riding. Just not quite enough to nudge out the Tory ass.

Funny Ha ha side note. Our idiotic 42 year old virgin Tory MP who continues to run in our riding thinks I'm one of his supporters. I don't know how but somehow my name (albeit somewhat misspelled) is on his "superior volunteer" list.

I have never even voted for him. I get invited every year to the volunteer banquet. I always plan on going to the banquet just for the free food and drink. Judging from the size of that big fat baby it should be quite the feast. Perhaps I can drag you along if I get my nerve up and go this year!

I know, scary isn't it, JustA?

The 42 year old virgin! Hahaha, that would be hilarious if I didn't hate that idiot so much, Urban Blonde. I love the idea of accompanying you to eat their food and drink their booze, but I am afraid it would stick in my throat.