makes you wanna blow the stars from the sky

Monday night, 8:00 EST - write it on your hand, or set the alarm in your cell or whatever it is that kids do these days - is when the winner of the 2008 Polaris Prize will be announced. CBC Radio 3 will be the covering the gala event, and with Grant Lawrence as the host you can expect some entertaining tomfoolery or at least a healthy dose of irreverence. And there will be performances by the nominees.

Past winners were Patrick Watson (Close to Paradise) in 2007 and Final Fantasy (He Poos Clouds) in 2006, the Polaris' inaugural year.

I can't decide among Basia Bulat, Holy Fuck, and the Weakerthans.

Who are you rooting for? 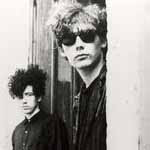 In other news, a big box set of Jesus and Mary Chain rarities is set to be released September 30. Appropriately entitled The Power of Negative Thinking, this massive boxset features, in addition to covers, b-sides and rarities, some rare photos and a history chart outlining just what the hell the Reids have been up to for the past decade.

Apparently after last year's reunion at Coachella, the brothers Reid kicked around a few other performances in Europe and then, in a move that very few JAMC fans ever dared to entertain as possible after their vicious breakup in 1999, began writing new material together. Soon we will live in a world that has new Jesus and Mary Chain songs.

I'll let that sink in for a moment.

As much as I am skeptical about the wisdom or even the appeal of band reunions, this idea has me salivating. I mean, it's the JAMC! But please sweet jeebus, don't let them allow Scarlett Johansson to sing.

~*~
Radiohead are off to Japan, where they will play six October dates, two in Osaka and four in Tokyo. Those lucky Japanese!

If you happen to be at the October 7th show in Tokyo, don't forget to sing Happy Birthday to Thom. And sing loudly, he'll be 40.
Posted by Barbara Bruederlin at 12:20 pm

Email ThisBlogThis!Share to TwitterShare to FacebookShare to Pinterest
Labels: this PSA brought to you by friendly zombies, Thom becomes a man

I am personally rooting for Miss Bulat, but only because hers is the one album on the list I've actually listened to.
And this Polaris, I'm assuming it's something like the Mercury Prize? But for Canadians?

And I'll probably swim to Japan. I really think I will. I have time don't I?

MAN oh man Barb, this is going to be one close race. So many worthy contenders. I would be curious though as to whom you would select as the ultimate winner. I have to admit despite my proclaimation that Basia will win, past winners would dictate that a lower profile victor will emerge.

Exciting though, isn't it. I'm glad you recommended the CBC broadcast because I think that in itself will be hugely entertaining. Grant is a terrific host.

Anyway... If you are interested in a friendly East vs. West wager I would be more than willing to step up.

New JAMC??? For serious? My heart just skipped a beat.

I want that box set as well...I'm guessing its a lot of ducats though.

Is it wrong that everytime I read the title "He Poos Clouds" I giggle like a 5 year old? ;)

Reading your blog is such an education for me as I come from the school of "hey, I like that song".

As in while listening to CKUA, "hey, I like that song", finding out who it is, buying their CD and promptly forgetting the names of all the song titles and Albums and just grooving to the tunes.

Thanks for forcing me to pay more attention!

the polaris prize, that is the credible one, vs, juno, no?

I want Holy Fuck to win, just to hear them announce the winner ;O) That Scarlet Johansen video was ... interesting

You are absolutely correct, BAP, you astute student of pop culture, you - the Polaris is the Canadian equivalent of the Mercury. It would be great to see Basia win, but I do think Sean makes a valid point.
Start swimming today - you'll make it in time. And I'll bet Radiohead will be waiting at the shore with a warm bathrobe and a cup of hot chocolate, cause that's just the way they roll.

How can I refuse your friendly little wager when you phrase it as a Flight of the Conchords reference, Sean? You are on, my dear!
Grant is funny as hell and I am definitely going to logon to listen to the broadcast, so I will see you there.
Now, as for the wager. You make a good point with that the winner could be someone with a lower profile, but on the other hand,this could be the year that an established band is rewarded for their excellence (Weakerthans), just to keep us on our toes.
Taking all things into consideration, I am going to take a wild stab and say that Black Mountain will win. And you?

You are not the only 5-year-old in the room, Al, as it makes me giggle every time too.
But yes, new JAMC! Squee! As for the box set, I don't know what they are charging but apparently it's a massive box, so I'll bet it's pricey. I think I'll just wait for the new one.

It's weird, Urban Blonde, I can't remember the Krebs cycle to save my life, but somehow the names of every song that I like from every album sticks with me. The joys of selective memory.

Please stop and pick up Bloody Awful Poetry on the way, JustA. She's planning to swim from Malaysia, poor girl.
I am really curious to hear some new JAMC. I hope I don't regret that.

Bingo, Gifted! It's perfectly acceptable to get all excited about the Polaris. Not so much the Junos.

My heroes, the As It Happens ladies, have talked about Holy Fuck on the program, Mel, in their impeccable CBC pronunciation too. It was delicious!
Whoever thought it was a good idea to have ScarJo sing with the JAMC at Coachella. Surely Hope Sandovl could have been convinced to show uo.

At least where audio is concerned, for fuck's sake.
*shudder*

She's a good actor, Phlegmfatale, but should never be allowed anywhere near a microphone.

I have the Caribou and the Weakerthans discs and I'm thinking about picking up the Bulat disc.

I'm rooting for the weakerthans. They are both great musicians and wonderful storytellers.

And really nice guys too, Remi! I would be thrilled to see the Weakerthans win, but there sure is a strong field this year.

I haven't heard the whole Caribou album, but I have liked what I have heard. How is it?

A well informed selection there Barbara. One that I considered myself. Alas, it is not my final choice... After careful analysis and consultation with a host of experts my final choice;(But first a little rationalization.) My head is telling me Plants and Animals- a more varied, well executed release there is not. My heart is telling me- Basia Bulat. Oh, My Darling charmed me as much as its creator. But my gut is telling me Holy Fuck. (And not just because of the Thai food I ate last night.) Rather this band will emerge as the best because of sheer creativity, doggedness and hopefully a huge "Holy Fuck" you to Stephen Harper and his planned cuts to the arts.

So Holy Fuck it is. It shall be glorious to hear this announced live on CBC Radio. Perhaps even moreso when it is printed on every arts page in Canadian newspapers.

For the record, this was a very difficult decision.

I love the rationale for your choice, Sean! And I agree that it would make for a surreal moment in broadcasting, journalism, and political commentary.

COnsider the wager on and, off the record, I hope you win.