light this pile of trash inside my head 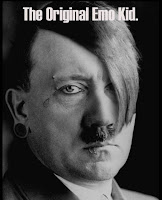 I awoke this morning feeling a little out of sorts, something to do with a dream about a phone call from my old boss. I guess I am just now starting to fully realize that I no longer have a job. Evidently I am a slow learner.

But even though I am still having fleeting feelings of being socially isolated, for the most part these were banished by the miraculous news I read in the paper this morning - that Chad VanGaalen has had a daughter.

It's no secret that we love Chad VanGaalen here at Zombie Central. Popular opinion is that he is one of the best things about this sometimes infuriating city. And we have had numerous discussions about what an insane world it would be if this musical and artistic genius ever procreated. We never thought it would ever happen, truth be told, as he seems too much of a man-child to be spawning, but now that the unimaginable has actually happened, we are all atwitter at the prospect of perhaps spotting him wandering around downtown with a baby strapped to his 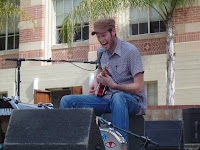 chest.
And of course, Chad Van Gaalen also has a new album, Soft Airplane, coming out this week. One of the songs that he has been trying out at concerts for some time now - Willow Tree - has made it onto the album and it sounds pretty wonderful. I cannot wait to hear the others. I strongly encourage you to buy this album as soon as it drops.
In the Lazy Unemployed Bastard files, I have finished compiling my master list of things to accomplish whilst having no purpose in life, and it is alarmingly long. I have, however, managed to scratch a few things off already, and that helps me feel a little less like a boil on the ass of society. I have now also developed a mini list - a mantra of sorts, a

Top Five List of Things I Must Do Daily:
- clean something
- organize something
- exercise
- learn something
- advance my career
Haha, notice how the job item is last.

Do you have a Favourite FIve list of daily activites? How about weekly? Or are you more the go with the flow type?

What about your 10 most played songs this week?

You should join me in heading over to John's new blog where we will all fess up to our sometimes questionable listening habits. I'm heading over there right after I take the Resident Offspring shopping for supplies for Art class. You know, those ones that aren't covered by the $65.00 art supply fee.

Posted by Barbara Bruederlin at 9:00 am

OK, now you have the master list.
Next step is the triage list, separating the most important from the less important. Then you have to draw up tactical lists and micro lists and then you have to make graphs and pie charts and set up If/Then contingencies.

So you see, you will be very busy for the next little while. You may never actually have to do anything

I can't wait for Chad's new album. I used to be a to do list person, but I've been more of a go with the flow person lately. Maybe it's because barely anything was getting checked off, and now I feel less guilty...

Ouch! You'd think 65$ would about cover it hey. I guess that only buys the paper/clay these days. I'm sure she will make tons of amazing art this year, so it'll be worth it :O)

You must have been around when I first birthed a child, Gifted, because that is exactly the sort of obsessive displacement activity record keeping that I did then too. We must be cut from the same cloth to be thinking like that.

Art is always worth it, Mel. I still think if we had art in high school... acchh, water under the bridge!
I am really hyped for Chad's new album. Bloody genius that guy!

$65 art fee! Wow, things have gone up since I took art. I believe it was $25 back then, which included paint, one brush and a sketch book.

Looking forward to a new album from Chad! Woot.

I need to write a list of things to do/accomplish - I was supposed to do it this week, but forgot.

Clearly, I am not the list type. although I love them in spirit.

Sadly zombie, I think like that, but my follow through marks are pretty low - thus the tendency to tell others to do it.

I'm guessing that how the starving artist phrase came into being, Al.
I can't wait to get Chad's album either, and then there are plans to see him at a little theatre downtown in October. I hope he brings baby pics!
It's pretty surreal when you have to put "make a to-do list" on your to-do list.

You are thought of as far less weird than those of us who actually do those obsessive displacement lists, Gifted. Count your blessings.

Definitely am a go with the flow type. 'Cause I'm single, I can get away with that but it also creates angst about undone chores. Haven't totally resolved that yet, except to do what I can when I think of it.

Unless something good's on TV.

Ah yes, the cursed tv. I've always been a list junkie, Bridget Jones,but the tv or more likely the computer will lay all those plans to waste.