I just don't get boys and their beards 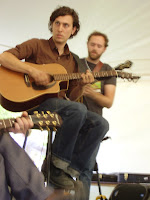 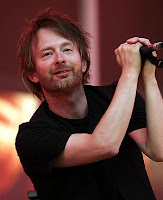 And then the madness spreads, and before you know it, you've got Thom Yorke looking like a dishevelled pixie. And that would be fine if the craziness stopped there, because in all honesty, the slightly mad dishevelled pixie look sort of suits Thom. But this wave of hirsutism amongst musicians shows no sign of abating. It's gone viral. 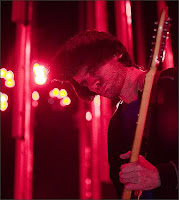 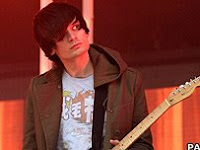 Exhibit A, spotted at the Seattle Radiohead concert - Jonny Greenwood displaying distinct evidence of facial furniture. Suddenly he is transformed from a shy and fragile musical genius into someone who looks as though he has just buried his family in the basement.

Exhibit B - Owen Pallett, transformed from cover boy to stevedore. I submit that if you have a perfectly beautiful face that legions of indie boys and girls swoon over, and you allow it to be hidden behind a beardy thing, you are bordering on criminal activity.

The previous photos should have helped 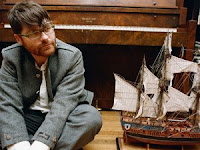 prepare you for the shock of our final case, but it is nevertheless still a disturbing sight. Dear sweet bookish Colin Meloy, a man who should run screaming from the notion of facial hair, is inexplicably sporting a beard (and are those muttonchops?) which would be better suited to an afternoon spent in the clock tower with a deer rifle than amongst the stacks in the library. I would not open the door to this man.

I suppose that now we can also look forward to the sight of even more neck beards among the indie boys in the audience. Oh joy.
Posted by Barbara Bruederlin at 5:25 pm

Email ThisBlogThis!Share to TwitterShare to FacebookShare to Pinterest
Labels: when good musicians have bad facial hair

I effing hate facial hair. Eddie's beard isn't too bad, but he is above reproach. I still prefer him without it though.

On some men, the right facial hair can look very sexy indeed. But when they don't take care of it and let it become something Grizzly Adams would have sported during his late teens - I draw the line. Boys!!! Clean it up please and take some pride in your growth! And just because you can grow it, doesn't mean you should.

Only the most esteemed can get away with the facial furniture, Beckeye, which is why Thom is allowed, albeit grudgingly.

Oh I get it! It's like a toy! Well I can certainly understand the compulsion then, Mister Anchovy, but just bear in mind that the ladies like to see your pretty face.

They need to take some kind of beard course, Karen, along the lines of prenatal classes that we women take. It should be a required course in high school. But considering that some of the men on my list are approaching 40, they will obviously need a booster a few years down the road.

You lost me after "disheveled pixie"! :)

I hate scruff. A full beard is one thing, but the half beards just need to stop.

I was at a local restaurant recently and a clutch of beardy boys were at the next table. They grossed me out, actually. They weren't cute boys to begin with, but they had serious grooming issues with the chin pubes. They need to tidy that shit up. *gack*

Now, Thom Yorke? He could be covered in wookie fur and I'd lick him bald, baby. The other guys don't get a pass, though. I never promised to be fair.

i do like some boys in beards but i have to say that indie boys rarely look good in beards.

And the half beards seem to be the ones favoured lately, don't they, Al? Although in some ways, I don't mind them as much, because when you are half-blind, like me, you can pretend the beards don't actually exist. It's just the light or something.

But you have to admit, a very adorable street urchin, right, Gifted?

Interesting observation my friend... I too have noticed a proliferation of facial growth on our music 'glitterati'. Have you seen the mutton chops on Ben Gibbard? He looks like Neil Young circa 1971.

I wonder though if its not a byproduct of touring though. Its probably just easier not to shave. Although I would venture to say it takes more work to look neatly disheveled than to actually just shave. Looking like you just got out of bed has become an artform to some.

On a related note and for possible future discussion. What is with the resurgence of prominent bangs on our music goddesses? (ie. Feist, Jenny Lewis, Cat Power.) Now that's a follicle trend I can get behind.

Oh yikes, I shall have to search out the Youngesque mutton chops on Mr Gibbard, Sean. I'm sure it will be delightfully disturbing.
You could have a valid point on the scruffiness being a result of touring shaving fatigue. While artful scruffiness may take some work, I suspect that some (cough Thom Yorke cough) come by it rather more organically.
You bring up a fascinating point with the prominent female bangs. And kudos to you for making this an equal opportunity discussion. I love the big bangs, and suspect that they are really hard to pull off. And I could never quite figure out how one sees through them, but damn they look cool. Sadly, being cursed with curly hair, I have never had the opportunity to wear the fringe. I feel so deprived.

Very interesting. You might be well advised to apply for some grant money to study this phenomenon more thoroughly.

Speaking as a man who has made very bad facial hair choices twice (once in my early 20's, and then a goatee in my late 30's that made my children refer to me as "Senor Diablo")

Mr. Anchovy is onto something. I can tell you that, in hindsight, I have no idea why I grew those beards in the first place. Seriously, it's like a bad facial hair satellite passed over, the signal hit my brain and I thought gee, time to grow a beard.

This is precisely why you should be wearing a tin foil helmet at all times when you are outdoors, Bubs. You, of all people, should be aware that it's safety first.

Oh, and PJ Harvey looks cute in her bangs, too.

I'm still laughing at my own wookiefur comment. If you get a grant for studying the hair-suitism, well, I'll be your assistant and work on the Thom portion of the project.

Who Would Phlegmmy Lick Wookie Fur Off Of? - hahaha we definitely have to get some WWPLWFOO t-shirts made up for when we start our research project, Phlgemmy.

My son has that scruffy half beard a lot of the time. It's earned him the nickname "Beard-o" from one of my daughter's friends.

Light Scruffy Beards I can stand but I hate hate hate those lamb chop/mutton chop sideburns and fat man goatees.

Facial hair is cool
On the weekends but mostly
Thom Yorke makes it hot.

Ohmygod.I don't give a damn about the other people's beardyness, but when OWEN PALLET grows one....it's the apocalypse, I tell you!

I don't mind Bret's facial furniture much though. As in Flight of the Conchords Bret.

Mutton chops are an abomination, Urban Blonde! They are the worst offenders, which is why it hurts my heart to see Colin Meloy sporting them.

You are the haiku queen, Mish! Betcha Thom using your haiku in some upcoming lyrics.

Bret actually has a good beard, BAP, as Jemaine has been known to let him know. SOrry to shock you to the core with the O Palz pic.

I actually blame it on the popularity of Minneapolis music. Our bands have been sporting the beard look pretty heavily for the last 5 years or so.

ever since I could grow facial hair I had had facial hair - well, mostly. I started with a goatee - then went through a clean-shaven preppy phase at the end of high school, then came the beard. 7 years later [eww... that sounds like way too long, lol] I still have the beard and wouldn't give it up for the world. :) [though I have to keep it nice and trimmed or else it would drive me nuts!]

Everything starts in Minnesota these days, JustA. It's getting downright frightening.

I'm sure you keep a lovely neat beard, Todd - no scruffy muttonchops for you! Right?