do you want to know what I think? 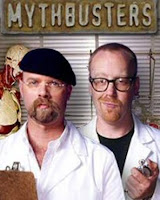 I think that Jamie and Adam from Mythbusters should switch names. Adam is a serious name, while Jamie is a more frivolous one. It would be helpful to me if they switched so that their names better suit their personalities.

I think that if you see someone idling their urban assault vehicle for ten minutes, especially on a beautiful mild day, you should have free license to slash their tires.

I think that when there are three shootings within 14 hours in this city, one of which left an innocent passerby - a newly arrived foreign student - permanently blind, and another which occurred within walking distance of my house, that we have a problem.

I think it's ridiculous that Employment Insurance deducts any vacation pay you received (before deductions) from any benefits you receive, so that you end up being ineligible for benefits until mid-January. And by you, I mean me.

I think that I am going to enjoy the Elliott Brood concert at the Warehouse tonight. It's been way too long since I have seen those lads play. Details tomorrow, pinky swear.

Posted by Barbara Bruederlin at 6:03 pm

Email ThisBlogThis!Share to TwitterShare to FacebookShare to Pinterest
Labels: my opinions let me show you them

That is horrible about the shootings, horrible. Especially the foreign student. Wow. That kind of took everything else I was going to say away.

I do hope you enjoy the concert.

Ash just about crapped her pants when I told her that you are in the know about Paranormal State AND Mythbusters... her 2 favorite shows ever... and now she's all giddy thinking you're the most awesome people she's ever met. Me too! But not because of TV, it's all about your love of limburger. Ok, and a lot more. ;)

I'm with Allison, the shootings are horrific. That's gotta be a rude wake up call when it happens so close to home, too... it's so damn hard to feel safe anywhere in the world, even your own backyard.

The hell? Deducting vacation time? Nice of the government to feel so free to screw you over on benefits like that... but it sure does a fine job of drawing out the anarchist!

Have a blast Ms. Barbara at the show tonight - remember, you pinky swore on the details!!! :D

I love your deep, philosophical thoughts.

The shootings are awful, really.

Stuff is pretty unstable round here too. I mean, we're all sitting on the edge of our seats waiting to see if our PM actually will declare a state of Emergency and bring in *gasp* ..military dictatorship.

But enjoy your concert, you hear? However sucky the world gets, the music will always be wonderful. Unless you're talking about,like, Hannah Montana, or something.

I agree with all except the concert thingy - I have no idea who he/they are. My only other comments: the tire slashing shouldn't be limited to just UAV's; I have a weird crush on Jamie and his mustache (not to mention Grant...); the difference between Edmonton and Calgary? Our innocent bystanders don't usually get shot - they get stabbed, hit by speeding cars, or swarmed while waiting for a bus. What the hell has happened to quiet peaceful Alberta?

Sheesh. Keep your head down and wear a flak jacket, will ya? We need you!

You should write Jamie and Adam a letter I think.

That is so sad about the foreign student.

EI sucks balls! I know a few people who've had that experience. :O(

I hope you have a great time at the concert!

Those shootings - horrible and horrifying

I feel your pain re: UI. I'm an indie biz person. We aren't allowed to have UI. Depending on our biz cycles and cash crunch situation, we sometimes find ourselves way out there on that little limb that is so close to snapping. And when we look down there's nothing but rocks below.

Shootings in Canada? That depresses the hell out of me. I can't imagine what it does to you.

Hey, if it makes you feel better, you can always tell yourself it's still
WAY better than Chicago--back in April we had 37 people shot with 8 of them killed in one weekend.

Have fun at the show!

I love it when you wax philosophical Barbimedes. Your observation on the 'Mythbusters' names is a very astute one. I agree with you too. Kari, Grant and Tory seem to be aptly named mind you. Such great and distinctive personalities too. I think that is why the show "works" so well.

Have fun at the show tonight. I look forward to hearing your thoughts on what transpires at the show.

That poor boy from Brazil.

Oh yes, a review is coming. Yay to that. That reminds me I have got to search through your older posts for the Radiohead review.

It is terrible, Al, but there is hopeful news today that he may recover the sight in one eye.

We would love to trap Ash on the couch sometime and watch all our favourite shows, Mish. Oh hell, the whole family is invited!
I knew that they were going to delay some benefits for the vacation pay, but I had no idea it would be the WHOLE AMOUNT.
And I always deliver on a pinky swear.

Oh I'm a deep one alright, Beth! And my mommy says I am also special.

Oh my god, BAP - a military dictatorship? Oh child, you must come to Canada until that blows over. I'll protect you from the neighbourhood shooters and everything.

I guess I have never known a quiet peaceful Alberta, Karen, as I am a transplant, but I sure have seen things escalate in the past few years. Maybe it would help if we all slashed some tires.

I'm pretty good at avoiding trouble, Dguzman - don't you worry your pretty head about me!

The cops were swarming down in the hood last night probably looking for the 3rd suspect in that shooting. That was just a tad too close to home and in the middle of the day to boot.

And I agree with everything else you've written. It's all shit. Calgary is an ugly city.

The RO thought I should bring my concerns to Mythbusters as well, Mel. I wonder if they have ever been approached about that before?
I wish I had known that about EI before. Not that it would have made any difference.

You are so poetic in your misery, Gifted! Now that I have gone freelance as well, I guess I will be enjoying playing Russian roulette with salary along with you.

Bubs - that is horrifying and unbelievable! And the scary thing is that one starts to get used to those types of stats after while, I guess.

Barbimedes! You win, Sean! I love Mythbusters and the mini-Mythbusters are just so adorable. They are such science nerds, which is really endearing.

The Brazilian community is understandably in shock, Toccata.
I am fortunate in that I can leech of the Spousal Unit, but I'm not sure what single people do. Not spend that vacation pay, I guess.

You snuck right in amongst my verbiage, Urban.
I heard that one of the guys was actually arrested in our neighbourhood. It's very disturbing.

I think that Tory should have sex with me. That's what I think.

I always get those guys mixed up, Beckeye. I know that Grant is the Asian guy, but is Tory the other guy or the girl? Not that it's any of my business.

Tory is the hot guy. Kari is the chick. She's pretty cute, but I only go that way for CZJ.

Good to hear you are a one woman woman, Beckeye.

I dunno, tho, Jamie is a very Scots name, and some of those guys are carry wallets that say "Bad Motherfucker." SRSLY.

Do they hang them from their kilts, Phlegmfatale? Because that would be totally bad-ass.

I agree... Definitely. They should switch their names. ^_^