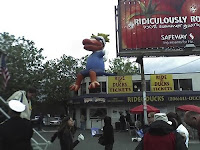 I'm sitting at the hotel room window, looking out at a giant duck statue that graces the roof of a building across from the collapsed fungus with a skin condition building that houses the Experience Music Project/Sci Fi Museum. Why does every coastal city have a tour operation in which the tourists ride around in a bus that looks like a giant duck? This is fascinating and confusing to me.

The EMP/SFM had some seriously cool stuff happening inside. You could listen to musicians tell little stories, like the one where Mark Arm of Mudhoney told about opening for PiL, where John Lydon demanded in the rider that a particular type of lounge chair be brought backstage at every show. I guess there were tensions between the bands and the threat by the roadies of a beating did nothing to stop Mudhoney acting up, but the disembodied voice of Lydon, asking "does anybody wish to be SILENCED?" did. Mudhoney ended up throwing meat slices from the deli tray at PiL's bus.

The gift shop was selling Kurt Cobain action figures in two different poses. I looked for an Eddie Vedder one for Beckeye, but no such luck.

The Hendrix room was rather cool. I quite liked the purple velvet jacket with the caption "menswear took a dramatic turn". Actually I have been noticing, since Allison has started writing about putting together museum exhibits, that I pay much more attention to how the display is set up and what the curators put in the literature.

In the sci fi part of the museum, I found myself eavesdropping on some hardcore sci fi geeks debating the finer points of Star Trek trivia, and another group arguing over the relative specs of the robot toys on display. I had nothing to contribute to the conversation, but I did longingly watch the giant screen displaying a Jetsons' tribute and feeling ripped off all over again that my Jetsons' lifestyle never did materialize as promised.

We then wandered around the Seattle Centre area for a while, a parklike place that houses the children's museum and some rides and arcades, as well as the EMP/SFM and the international fountain, which resembles the crash site of a space craft, or perhaps a giant steel collander embedded into the earth. The place was overrun with day camp kids. The Resident Offspring forced me to ride the merry-go-round with her and the Spousal Unit left our purses on the bench while he tried to take a picture of us. Any picture that results from that will show me screaming, "watch my passport!" with a terrified look on my face.

After walking another 765,754 miles around the city, we ended up the evening with a lovely curry meal close to the wharf and then walked down to the ocean as the rain started up again, ever so lightly. I need my daily trip to the ocean or I get grumpy.

Today's agenda, the Underground Tour of Seattle, and then maybe we'll drive out to the White River Amphitheatre in Auburn for a concert or something. I hear there's a pretty good band playing there tonight.

Posted by Barbara Bruederlin at 8:55 am

Email ThisBlogThis!Share to TwitterShare to FacebookShare to Pinterest
Labels: I can't believe I will be seeing Radiohead tonight, I wonder what Thom will wear, music is my boyfriend, the great Seattle odyssey

What were the two Kurt Cobain poses? Overrated and dead??

(I'm sure the Cobain disciples will hunt me down over here now.)

A Kurt action figure!!!!!! I wants one! Sounds like you are having an ace trip so far Barb. I hope your passport remains safe too! XO

So what band is playing at that concert? The Eagles? The Jackson 5? :)

KURT COBAIN ACTION FIGURES!! No way! I had no idea. Must pick up a 6-pack or so. This is the coolest idea since hydrogen merged with oxygen.

...but maybe I'll hold out for the Thom Yorke action figure, complete with wonky eye and 5-day facial growth*. Heh! This mental image pleases me greatly!

I am shocked there is not a Eddie Vedder action figure...it would be so easy to make! Just wind it up and it doesn't do much of anything.


* Second day in a row I have used the word "growth" in a blog comment. I need help.

I'm chuffed that you're reading the interpretation more in a museum, that made me smile!

Perhaps now you are en route to see your boyfriend...enjoy!

REading Beckeye I now feel I have permission to say what I was thinking"
Kurt Cobain action figure two poses: dead and alive.

I'm thinking about you tonight, during the commercials of the Olympics. I know it will be a life-altering concert....

SOUNDS like you're having a great time in Seattle Barb. I sure do miss the place that's for sure. (One of the cleanest cities I have ever visited.)

Anyway... You will probably be enjoying the sublime sounds of Grizzly Bear in a couple hours with the main even not soon behind. I'm very much looking forward to your assessment of the show. Fingers crossed you don't actually explode.

Enjoy the remainder of your holiday.

What do Radiohead groupies throw on the stage?

All this walking around sure must be doing the body good.

What?? No Thom Yorke action figures? The travesty!
And yes.What DO Radiohead groupies throw onstage?

Have fun blissing out to Radiohead! I can't wait to read what I expect to be a rather gushing review!

ROFL at Beckeye! You made my morning!

Didn't think you'd still be posting Barb, the SO is so jealous of your Music project trip.

Hope you survived the concert intact.... I assume you are in a Thom-induced haze this morning.

Great, now all I can think about is how I need a velvet jacket. And action figures.

I love Beckeye's comment. And Beckeye. Oh, and you Barbara! It sounds like a smashing good time with a few more dramatic turns to come. Enjoy the show while I go enjoy your post.

You started a flame war there, Beckeye. Well done, you! We need more controversy on the internet.

Mad it back with passport intact, but action figure-less, Mel.

It was Rick Astley, Dr M. Best show ever.

Hoho! I love how you have weighed in on the Kurt vs Eddie action figure controversy, GOB! We need a good slappy fight around here. And you know that I would have bought 3 dozen Thom action figures if available and would have made a couple of soccer teams from them.

I blame you for slowing down my trips through museums, Al, now that I have to stop and read everything, and ponder the set up of the exhibit.

Apparently there is safety in numbers, Reluctant aka Gifted, and I'm sure you can count of Beckeye to protect you from the Kurt hordes.
It WAS a life-altering concert in a way, I am no longer someone who has never seen Radiohead. I have powers.

Not only action figures, Bridget, but also lunch boxes! There was a Jimi Hendrix and a Johnny Cash, as I recall.

I am happy to report I made it through unscathed, Sean, or at least unexploded. Great show, Grizzly Bear did not open this particular one, and I would have enjoyed seeing them again, but Liars were good too.

Radiohead fans throw recycle bins, bicyle tires, and bags of fair trade coffee on stage, John, because that is way sexier than undies.

I'm thinking I need to get a license to start a line of Thom action figures, BAP, the whole band actually, and they would each have different super powers.

Rest assured that it is the most biased concert review you will read in a long time, Westcoast. And full of bliss.

I wore my Radiohead shirt in downtown Seattle the next morning, Urban, that's how blissed out I was. I don't do band tees, but gotta represent in this case.
The EMP is so cool, you should go sometime!

I saw a woman with a brown velvet jacket at Seattle airport this morning, Justrun. I think she must have been to the EXP as well. But it really was not as cool as the purple one.

There was no shortage of drama, Dale, but laissez-fare too. It was a well-balanced and well-smashed trip.