in pitch dark I go walking in your landscape

I approached my annual mammogram with some trepidation today, not because I feared anything was amiss or even because of the discomfort of having my girls flattened in a waffle iron and then turned in fourteen different directions, but because I was afraid they were going to leave me to rot in the change room again. I was all prepared to march out if kept waiting longer than 10 minutes for the all-clear.

And while I was flipping through the five magazines in my little change cubicle, all of which featured Brad Pitt and Angelina Jolie on the cover (is there honestly nobody else in the entire world that is worthy of gracing a magazine cover anymore?), I heard the woman in the cube next to me flag someone down and ask if she could go, as she had been waiting for the signal for a long time. Obviously somebody else was the victim this year. heh.

I was very pleased to be told that, instead of wearing a paper gown that would be turfed into the garbage after 3 seconds of use, I could simply put my own top back on after removing my bra. Finally, somebody clued in to the insanity and wastefulness of those paper gowns. Right chuffed I was about this development.

Almost as chuffed as I am about the fact that in seven little days, Thom and Jonny and Ed and Colin and Phil will be playing music just for me! I am quite certain that they will not play Let Down, and I am actually quite relieved about this, because if they did, I swear I would plotz. Seriously, there would be a loud explosion, followed by bits of zombie flesh flying in all directions and then hanging off of everything. Nasty, nasty situation.

Are you excited about anything today?
I'm also excited that my gorgeous niece has set the date for her wedding next summer and we will get to meet her puppy. Isn't he adorable? You can all but smell the puppy breath in this picture. 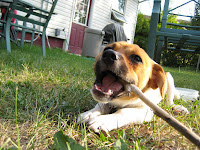 Posted by Barbara Bruederlin at 1:44 pm

Email ThisBlogThis!Share to TwitterShare to FacebookShare to Pinterest
Labels: no thicker than a slice of toast - honest

I am chuckling at you illustration of what it would be like if Radiohead played Let Down. I hope for the shake of those around you that they don't play it.

I am excited about 14 days from now, when I will be done my dissertation. Oh, and I'm going bowling on Monday, which is exciting as I haven't been in years. Yes, I live a thrilling life. ;)

If I saw a picture of Angelina in the mammogram waiting room, I'd be taking pleasure in the fun she will have with those hooters on her first trip to Natasha, The Mammographer.

I was excited to get my new People magazine today featuring Angelina Jolie, Brad Pitt and their new babies.

You'll be happy to know that I read it while lounging in a paper gown I bought at the Radiology lab garage sale.

Oy vey, it seems like just yesterday you got your last one. I sure remember the post anyways. How time flies eh! Glad you got it over with tho, now on to the good stuff. OMG that puppy is just too dang cute!!!!

I have a terrible feeling that the puppy won't be much of a puppy anymore by next summer.But it's still pretty cute!

Oooh I'm rather pumped about the Camera Obscura gig here in October. Hopefully that one won't get cancelled too.

I am excited that you posted Habby's pic. Habby (go Montreal!)is almost as cute as the late great Nomie. I am also excited for our tourist week in Korea and in Japan. And of course the wedding!
berni

Huzzah for almost finishing your dissertation, Al. We will have to have a virutal champagne toast to you at the blessed moment.
Bowling!? WHy not? Do they have both 5 and 10 pin in Britain?

Last year Natasha the Mammographer was telling me some interesting facts about doing mammoghraphies on women with implants, Gifted. Apparently they are not able to squash them down to the thickness of a slice of toast so extra photos are required.

I hope you didn't buy the one I left in a spiteful crumpled heap on the floor last year, Urban, becuase that one had bad karma all over it.

I know, what happened to the year anyway, Mel? And there was so much I was supposed to have accomplished by now.
Oh well, at least we have cute puppies to look at.

I would love to see Camera Obscura, BAP! Belle and Sebastian Junior. You will, of course, write a review?

Habby can't touch Nomie for awesomeness, Berni, but damn he is cute.
I can't wait to hear about your adventures in Korea and Japan!

I hate to tell you this, but that puppy is ten times cuter than your Thom. But not quite as shaggy. ;)

YOU KNOW Barbara, I take great delight in swimming in your ' stream of consciousness' but mammograms, Radiohead and puppies would be a first for even me.

Curious stuff indeed though... "Thickness of a slice of toast."? Good God woman, that must have been your scream I heard yesterday. I am in awe of your healthy diligence.

I learn something from you everyday.

I'll bet they play Creep over and over and over, just to make up for all the years they were dickheads and refused to play it.

Thom may be no puppy, but he has his charms, Beckeye. At least he wins the shaggy dog contest.

Mammograms, Radiohead, and puppies - that's just a small part of the jumbled mess swimming around in this head, Sean. It's scary in here sometimes, I tell you.
And I usually distract myself from the discomfort of the mammography by asking the radiologist stupid questions.

Either that or they'll play Never Gonna Give You Up, JustA, because Radiohead have been known to take great delight in Rickrolling people. Actually I hope they do!

That puppy looks like a good match to my puppy Praline, who I should have named "Mandible." Bet they'd get up to lots of mischief togevva.

Praline's a bit of a chewer, is she, Phlegmmy? It's hard to get made at them when they are so cute, though.

I am so excited about seeing Radiohead!