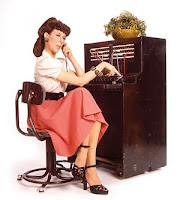 In September, the province of Alberta is switching to ten-digit dialing, even for local calls. To prepare the populace, several weeks ago the phone systems instituted a reminder message which is heard after you dial the old seven-digit number. Apparently it says something like "remember, Albertan, come September 12th you must dial ten-digits, but for now I will put your call through anyway".

I say apparently because I have never personally heard this message. Not once. And I have never used local ten-digit dialing. Doesn't matter what phone I use or what number I call, the call always goes through without the reminder message.

I don't know whether to feel privileged or ignored.

~*~
My sister and two of my nieces are teaching English in Korea for a month, prior to a visit to Japan. My sister, a fiesty and very youthful-looking retired teacher, has been referred to by her five and six-year-old students as "grandmother teacher". This will forever be her name, as far as I am concerned.

~*~
Much as I am concerned about many issues surrounding the Olympics being held in Beijing, including the usual human rights abuses, pollution, displacement of citizens, environmental disasters, etc etc etc, there is no way I am going to be able to resist watching the Olympics. I'm already starting to salivate at the thought of two weeks of spectacle.

Will you be following the Beijing Olympics?
Posted by Barbara Bruederlin at 6:22 pm

Email ThisBlogThis!Share to TwitterShare to FacebookShare to Pinterest
Labels: exactly two weeks until I am in the same building as Radiohead, strange scenes from inside the phone booth

I right there with you on the Olympics watching. I'm a sucker for all the Olympics, winter and summer.

The same thing happened with phone numbers here in Vancouver in 2002 I think it was. That message was very similar, and VERY annoying! Not sure if I will be watching the olympics or not...I usually watch the highlights on CBC or on the Netz hehe

I don't follow the Olympics. I won't say I never watch bits of it on television. I simply don't follow it, and don't really care who wins, who loses and who gets caught with their hand in the medicine cabinet.

I hope our athletes don't cheat and have a good time while they're over there.

It seems hard to believe that the organizers of the thing thought that China would be a good place for the Games. I've heard that the selection process is pretty greasy, though. Who knows what happened.

I love watching the Olympics, Winter or Summer. I will be glued......

I hear the message everytime I forget to punch in the area code. Perhaps if you switched from your Fisher Price phone to a real one you would too. ;)

PS Your Sister rocks! What a great experience!

I adore watching the Olympics! I am so there, despite all the negativity this time around. And I will enjoy watching Malaysia not win a gold medal. Again.

I am an Olympics whore. Love them. Can't get enough....will be staying up all hours watching them.

(Note: How appropriate, though, that the wv starts with "IOU")

Ontario changed to the 10 digit system a while ago, and it was so hard to get used to.

I'm bummed I don't have a telly to watch the Olympics this year...but hopefully clips will make it online. I really just want to see the opening ceremonies and what the protests are going to be like. I remember the reaction here when they brought the torch through London. Its going to be interesting.

For once, I differ from Dr. MvM. No way am I watching these Olympics.

Feel priviledged; that would be annoying. We switched to the 10 digit phone here in Virginia back in 94 I think it was. Like second nature now, but what a pain. I keep hoping we'll move to a 14 digit code, or better yet, have to dial internationally to get someone local. I'm all giddy with anticipation.

I wouldn't be watching the Olympics except for the fact that my wife will be glued to the set. What a poor location to try and promote sportsmanship and spirit of competition than there.

Where bouts in Korea will Grandma Teacher be teaching? I spent two years in Weagwan and Daegu (Korean cities) between 92 and 94. Sounds like a blast!

And world cup soccer too, Dr M, I think because they only come only every 4 years. Mind you, I watch the curling championships every winter too.

I really want to hear that message just ONCE, Mel, so that I know it is not some elaborate hoax that is being perpetrated against me. Wait a minute, you're in on it, aren't you?

There is some misguided notion that giving China the Olympics will encourage them to play nice with others, Mister Anchovy, but I have my doubts about the validity of that theory.

Maybe that is the problem, Urban Blonde! My Fisher Price phone is not on the grid. Whew, thanks for clearing that up, I thought I was going insane.

Better to not win one than to win and have it taken away because some dumb athlete forgot they were going to have a drug test, BAP. Still, the drama makes for even better tv watching.

I am an Olympics whore - oh, Deb, you have no idea how hard I am biting my tongue right now to not make some remark about your income increasing substantially when the Olympics comes to Vancouver.

It will be really interesting, Al, loads of drama. Yes, the torch relay did not have quite the effect that Olympic organizers had hoped for, I think. Hmmm, wonder if Radiohead are still using a Tibetan flag at their concerts. Will keep you posted.

Is it just these Olympics or Olympics in general, Bridget Jones? It will be hard to resist the lure of the drama, I think.

I love the challenges of international dialing, Zombie - drop a 0 here and add a 1 there, or it is the other way around? Makes me nuts.
This is fascinating to me, that you spent two years in Korea. Grandmother Teacher is not in either Weagwan or Daegu. I believe they are actually in Angyan, or something like that. I need to check the name. I would love to go there sometime. It looks so beautiful.

We got a similar message when they moved to the 10 digits at my parents' house. It was so painful to hear that after hearing it twice, you did dialled the 10 digits!

now World Cup Soccer, on the other hand...I'm addicted to that. I live in "Little Portugal" here in Toronto where everyone is a soccer freak. I say, when in Little Azores, do as the Little Azorians do...or something like that.

I'm going to watch the Olympics. I went to high school with Paul Tichelar but we lost touch afterwards, he's competing in the triathlon.

I will start dialing 10 digits once I hear that recording twice, Evelyne, I promise.
I am definitely keeping an eye on all the politics surrounding the games.

It must be wild in your neighbourhood at soccer time, Mister Anchovy! Way better than sitting down in the family room in front of the tube.

Cool, Stephanie! I will be rooting for him then!

Well I'm not sure I'm rooting for him... he was a jerk in the end