for a minute there I lost myself

I am still agog over the Radiohead live webcast from Santa Barbara last night. What a magnanimous gesture. If you missed if, there are over 50 clips that come up on YouTube if you google Radiohead Santa Barbara.

I thought that Thom seemed somewhat tired, and understandably so. Phil, on the other hand, was completely on top of his game. He impresses me more and more all the time. Jonny was perfect, as always. 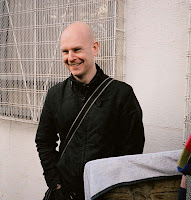 Does anyone know what music was playing at the beginning of the webcast, before Radiohead took the stage? They played the same in Auburn, and I'm thinking it might have been Underworld, but I'm not sure. Insights would be hugely appreciated.

And can I just say, for the record, that I was thrilled that they played a bit of Flight of the Conchords (If You're Into It) after the webcast wrapped up. Pleased me greatly, it did.

The thing I loved most about this broadcast, other than the chance to relive my concert experience from the previous week, and the fact that Radiohead was putting this out as a gesture of appreciation to their fans, was the way that this event united people. I sat on my couch with the Spousal Unit and the Resident Offspring and we watched together, knowing that this was live, that we were experiencing things at precisely the same moment as the actual audience members were. And not only that, but that many of my beloved blog friends were there in that moment with me, no matter where in the world any of us were. It was a moment that felt like true community. I guess this is why people go to church and shit like that.

I didn't multi-task at all during the concert, concentrating instead exclusively on the performance, but then when I checked email afterward, there was a slew of messages from blog friends, some of them written just as the concert was starting, others during the performance, and the rest immediately following. I felt so connected, as though we had all sat next to each other in that small dirt-floored bowl in Santa Barbara.

I had intended the above as a lead-in to the rest of my photos from Seattle, but I see that I have already gone on rather endlessly, so rather than subject you to more of my navel-gazing or keeping you any longer, I will bid you a fabulous Labour Day long weekend, and leave you with this little taste of last night's magical concert. Seattle photos later this weekend. Pinky swear.

Posted by Barbara Bruederlin at 4:45 pm

Email ThisBlogThis!Share to TwitterShare to FacebookShare to Pinterest
Labels: joined at the ethernet, North America seems a wee bit lonelier now that Radiohead have gone home, the Radiohead family

omg you're kidding me. After what seems like ages of not hitting your blog (and thank you my wonderful friend for all your compliments, now stop! *wink*) I'm actually the first to post on a post? WHAT? Clearly my rhythm is off. ;)

The part about the webcast that totally did it for me was when Karma Police was performed... did you hear the crowd singing in the background? GOB 'n I were already well into our sing-along bliss but when I detected thousands of others singing along, all hundreds of miles away, it felt as real to being there as anyone could ever be.

You are SO right, it was like a group of friends all sitting together in a theater as huge as your mind can imagine, joined by music. I've heard it said that music is a universal language... it's also a great uniter. Thank you for such an awesome invite - and letting me (virtually) sip off your ultra k-cool Radiohead water bottle!

We live super close to the water, like, we wake up & can tell if it's low tide close. This morning on my way to work I thought of you walking down the stairs at Pike Place, deeply breathing in the air, & saying in a most peaceful calm "oh how I love the ocean air! It's so rejuvenating!" & smiled & sent you a hug through the "wire." :)

You know, you have to come back soon. We still have a restaurant to torch!

Love you so much & the hell if you don't rule!

Always nice to be part of a community, virtual or otherwise.

My connection chose Karma Police to freeze up for a bit, Mash, hence I missed some of it. I did watch a clip later though, and could clearly hear the entire audience singing along. It was glorious.
I miss the ocean! I miss you guys! I don't miss Luigi, except perhaps for the opportunity of kicking him in the nuts.

So glad to have you along as a member here at the Church of the Mobile Home, Dale. Let's not "borrow" from the donation plate this week, though, okay?

It's weird when I realize that I have never even met some of my closest friends, Al. This crazy internetz!
Pictures coming today. Promise!

the webcast was amazing, and I will never forget it! I am going to check out youtube later to relive some of those moments. I'll be back later for the much anticipated Seattle photos!! :O)

Because I got to go to a punk show AND a late horror movie last night, I must in turn, go to see Chilliwack tonight at the PNE with Sean UG! I gues fair is fair...

Chilliwack! Oh I am so sorry,Mel, but I guess we all have to pay eventually. I hope the punk show and horror movie made it all worth it though.

Oh, I forgot to ask, did they happen mention my hero Humphrey Lyttelton who help them out on Amnesiac

They didn't, Gifted, I think they were pretty bagged by that point - last stop on the tour.