she liked to hang out at the art school - going Sledding 2.0

Art and Design
Friday, June 27/08
Glenbow Museum
On Friday we took a bit of a breather from the manic concerting to take in some of the art installations that Sled Island is presenting in conjunction with the Glenbow Museum.
.

Wim Delvoye's Cloaca No. 5 is an Inspector Gadget-like creation, designed to simulate the human digestive system. An intestinal microclimate is created through the careful addition of precise levels of various enzymes, which are timed to create the bacterial flora needed to transform food into fecal matter. The machine was digesting while we were there, thus the pooping was expected later that evening during the official opening.
.
The system pictured here is actually one of the other incarnations of the Cloaca Project which were available for inspection on view-master-like devices. And as you can see, this one is a money shot. Fascinating and weird, this appealed to my inner science nerd.
.

Noam Gonick and Luis Jacob's Wildflowers of Manitoba is a large installation, comprised of an open-sided geodesic tent, in which two men lounge on sleeping bags and sketch one another, whilst footage of a group of young men at a wilderness retreat is projected onto the walls of the structure. The footage of the men cutting up food, playing with puppies, running naked down a rural railroad track, and wanking off for the camera, is interspersed with grainy images of wildflowers.
.
Yeah, I couldn't figure it out either.
. 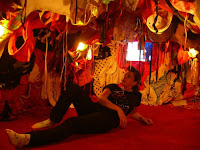 Peach Pit (Fan Base) is a pink-carpeted cave, covered in brown fur. It's Peaches, you know exactly what this is meant to symbolize. Invoking questions of gender identity, as well as the delineation between performer and audience, the interior of this installation is festooned with articles of clothing thrown on stage during Peaches' performances over the years. A video of fans singing her signature electro-clash song, Fuck the Pain Away, plays on a loop deep inside the pink cave. From behind the cave, waves of pinkish light emanate upward, giving off the suggestion of heat.
.
This was a fun installation, sassy and forward with its blatant sexuality, but strangely inviting and friendly. Maybe it was the carpeting, perhaps the heat waves.
.
-#-
Today is the final full day of the Sled Island Festival. We will be heading for the giant outdoor show at the Mewata Armouries early this afternoon where we will spend the day baking in the sun, grooving to some amazingly diverse and influential musicians. I shall be wearing my new sun hat, even though the Resident Offspring informs me that apparently I look like dork in it. As if I care.
.
Amazingly enough, there will still be numerous performances at venues around downtown tonight, most of them starting just as the mainstage is wrapping up, and continuing into the wee hours. I, however, will be dragging my sorry ass home directly after mainstage, and I will return tomorrow with the final concert review.
.
Please visit the official Sled Island site for tonnes of pictures, including photos from what I understand was a fantastic concert yesterday, featuring the likes of Yo La Tengo, Tegan and Sara, Elliott Brood, and Broken Social Scene.
Posted by Barbara Bruederlin at 11:15 am

You lost me after you mentioned the word festooned. ;)

I hope the final day is producing some great sounds. Look forward to the review.

Al, I was actually thinking of you as I read the descriptions on the walls for the different installations. I never really thought about how challenging they must be to write until you mentioned having to write some. You need to be concise, yet descriptive at the same time.

There's somethign really interesting about attending an installation exhibit that u don't get. I always feel all these reactionary emotions bubbling up - how dare they present this without providing me with the meaning/context. I WILL NOT be made to feel ignorant, I think.

But then I'll go home and think about it, sometimes for days and days.

I still go occassionally just to feel challenged and pushed beyond my comfort zone. I guess it works that way with music too.

Good for you to go and allow yourself to feel perplexed.

There's no such thing as a dorky sun hat.

Our science museum had one of those digetive systems too, but I wasn't impressed.

Now if it would have tucked a magazine under it's arm and declared "That wing is closed" . . .

I say good for you, Gifted, for having the stones to actually admit your reaction to those perplexing installations - a reaction that we all share, but most of us don't admit.
You do have to go outside the zone sometimes, that's for sure.

I'm pretty certain the next generation of the Cloaca Project will do precisely that, Just A. And it won't return your magazine either.