I haven't worn a shirt like that since, aaacchhh, 1974 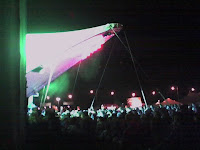 I've never been to Wales, but it sure would be fun to be there from August 15-17 (except for the fact that I will be busy then counting sleeps till I see Radiohead). But those who will be in the vicinity could certainly do worse than to take in the Green Man Festival at Glanusk Park.

For those of us who sadly cannot jet over the pond for the weekend, there is another opportunity to get involved and this is really neat. You can chose the band who will take the final spot in the lineup. Honest and for true. There's a poll on the site, which has videos of all the bands that are vying for the final spot on the lineup. You can take a listen to some new music AND cast your ballet for the most deserving band. Plus you have a chance to win a pair of tickets. And then you are really in a pickle, since you will then have to decide how to justify a quick trip to Wales for the weekend. I mean, since you've already got the tickets and they were free and everything...

I'm going to spend some time this cold, windy, rainy weekend checking out these new bands and pretending that I am a festival organizer.

~*~
I know you kids are starting to get worried because I haven't talked about Radiohead in days, so I will calm your fears with the assurance that there is action in the Radiohead universe. They are currently in Dublin, having begun the European leg of their tour last night, and the word on the street is that they are now performing a new song Super Collider. (update: video footage available at You Ain't No Picasso) I am so glad I live in a world where new Radiohead music is a reality.

And of course EMI have now released the controversial Best Of Radiohead album, which no self-respecting Radiohead fan would ever buy anyway. Perhaps if they had released an album of b-sides and rarities, we could talk. Of course EMI have been real assholes about the whole thing anyway, so maybe not even then. The release coincides with all of Radiohead's albums and music videos being made available at itunes.

Including this early video from deep within the vaults - Anyone Can Play Guitar. It is the most outrageously cheesy thing I have seen all day and I am making pizza for supper. Iguanas, turkeys, flaming guitars, and a bare-chested Thom! It's so over the top and brilliant in its awfulness. Enjoy.

Posted by Barbara Bruederlin at 1:07 pm

Email ThisBlogThis!Share to TwitterShare to FacebookShare to Pinterest
Labels: festivals I wish I were attending, Green Man Festival, the most important band in the world being silly

I saw the Radiohead greatest hits CD the other day and I laughed. It just seemed so...odd.

I was having a problem getting Pearl Jam's "Vitalogy" burned on to my computer recently when I posted "Corduroy" as an mp3. I briefly thought to myself, "Did I ever buy their greatest hits CD?" and I immediately followed it up with a kind of snappish response to myself - "Why in the hell would I have ever bought that?"

bloody awful poetry said...
This comment has been removed by the author.
9:07 pm

I was just visting the MTV asia site the other day, and I saw this little ad for a competition, where you have to answer a bunch of Radiohead-related questions to win a copy of the Greatest Hits thing. I was halfway through signing up for it when I suddenly caught myself, asked myself what the heck I thought I was doing, and immediately left before the Evil Powers of MTV seduced me into doing something else equally stupid, or heinous, or both.

Ty & I were out the other day and this really great song came on and I asked if it was Beck and Ty said it was Radiohead. Must find out what it was, so I can tell you how great I thought it was.

Ty & I were out the other day and this really great song came on and I asked if it was Beck and Ty said it was Radiohead. Must find out what it was, so I can tell you how great I thought it was.

No alcohol was involved.

The concert sounds good, except I will be in final dissertation push that week so won't be able to get myself over to Wales. Although I'd like to visit.

The stores are pimping out the Best Of Radiohead cd something fierce. I know most fans wouldn't buy greatest hit cds, but if you know anything about an artist and don't have like minded friends to steer you in the right direction, they are good.

A Radiohead greatest hits cd is indeed a very odd thing, Beckeye, particularly in light of the fact that, as Thom says, they never had any hits.

Good for you for resisting the siren, BAP! You've got stones, girl. I hear that the MTV awards will be in Malaysia this year though - is there a lot of buzz over that?

Was it Bodysnatchers, Deb? I'll bet it was Bodysnatchers. It's getting airplay, and it's rockiness would appeal to a die-hard rocker like yourself. Good song too.
There may have been no alcohol involved at your end, but I'll bet that Blogger was drunk.

That's a shame you won't be able to make it to Green Man Festival, Al. I won't even point out that THE NATIONAL is playing, because I don't want to drag you from your dissertation. But I would love to go, and also to see Wales, we hear so little about it here.
I have nothing against compilation cds, just the politics behind the Radiohead one. I still listen to the JAMC 21 Singles, as it's a really great album in it's own right.

I'm finding comfort in shows that are impossible to attend. This is mostly because I have had to spend the entire year with blinders on; no shows allowed. I was too busy with store start up, awk. Now that I am begining to have my life back again. I can't dare look at everything I've missed - Radiohead included.

I have an ever growing mental tally of all the great concerts and festivals I have never been to, though fantasize about incessantly. Thankfully I have a few good ones under my belt in order to sustain my soul and overall sense of well-being.

That video definitely falls under the "sooo bad it's good" category, and thankfully the boys evolved quickly away from the MTV buzz bin after their first album and never looked back!

Like your blog (and taste in music too) - linked through the spring reading blog & I'll definitely be back!

That's the worst situation, Serah. Nothing worse than having to miss a concert that you could have possibly gone to. Well, I won't talk too much about finally seeing Radiohead. Oh who am I kidding, of course I will! Sorry.

Why, thanks, Westcoast Walker, and welcome!
I wonder what it would be like to have unlimited time and resources to attend every concert/festival that strikes your fancy. The mind boggles.
I too am so thankful that Radiohead, after a brief taste of the MTV life, decided that was not for them. They were pretty astute young men and even more so as more mature men.