for your viewing pleasure - a gaggle of Marthas 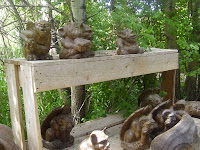 The resemblance is uncanny, but the top photo was actually taken at farmers' market/u-pick/tree nursery destination and contains no Marthas. The second was taken in my kitchen. 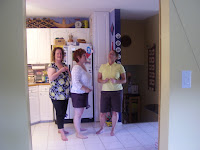 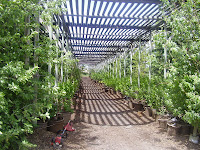 Had I known the camera batteries were going to crap out after a few shots and I was going to be too lazy/forgetful to replace them, I may not have taken these pergola shots, but I do like the lines of the shadows and the interplay of the trees and the former trees. 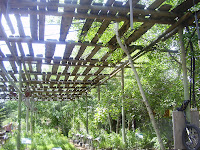 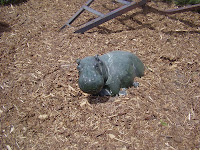 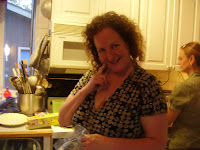 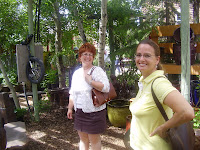 Marthas know how to chill, and how to strike a heckuva deal on yard art. 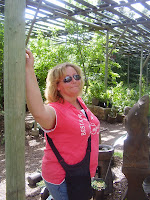 This gargoyle put me in mind of Allison. In the nicest possible way of course. 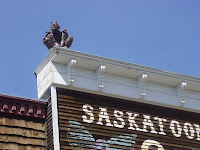 The Marthas were a little more low-key this weekend than in some previous Dionysian romps, so it was more of a healing and rejuvenation by virtue of simply being together under one roof than it was vamping out on the town.

In fact, all our meals were taken on the patio, all our karaoking was done in the context of a board game (won by yours truly and lorded over the others), only one road trip was made (to the above-mentioned nursery), and we even took some exercise in the form of a walk around the lake in our neighbourhood. Hell, we even climbed the waterfall. I won that too, but to be fair, nobody else knew it was a race.
Posted by Barbara Bruederlin at 6:55 pm

Email ThisBlogThis!Share to TwitterShare to FacebookShare to Pinterest
Labels: martha pic spam, the Marthas do Calgary

Ooh is this like a, uhm, I dunno, an unofficial society of sorts? What do you guys do? Apart from what you've just blogged about, of course.

Those are some mighty fine gargoyles! I don't mind being associated with them. :)

Sounds like you had a lovely and chilled out weekend. Its nice to have a relaxed weekend with friends instead of an on-the-go one sometimes. Although I'd say climbing a waterfall is adventurous.

BAP: the Marthas are a handful of fabulous women who adopted me when I moved to the city, and we don't really do much of anything, other than spend a weekend or two together each year. We giggle a lot, if that counts for anything.

I should probably clarify that the waterfall climb was up the hill alongside the water, not through the water itself, Al. That would have been challenging indeed. I immediately thought of you when I saw the fine selection of gargoyles and knew I had to capture a few.

Hasn't anyone ever told you not to go chasing waterfalls?

That looks great. I liked those shots of the pergola and I'm glad you included them.

in 3rd picture from the bottom I think I see a unicycle..did any of you buy or try it?

Your first picture shows trolls and gargoyles...I have one like the far end top row..I thought about buying others for the yard but a wiser person than I told me I would start looking like those weird people that have a gazillion garden gnomes around their yard.

I love that little hippo!

Yes, I knew you had superhero qualities, but it would be a challenge to actually walk up a waterfall even for a pro. :)

sounds devine.
Love how you take meals on the patio.

I take opiate cordials on the patio.

They only ever warned me about rainbows, Beckeye. Nobody said anything about waterfalls. Obviously an oversight.

I love how everything was 10 degrees cooler under the pergola, Bubs, now I feel like covering my whole backyard with one.

A gazillion garden gnomes in your yard? You say that like it's a bad thing, Kelly. I think you should embrace your inner gargoyle collector.
Sadly, nobody from our crew bought or even sat upon the unicycle.

Racing up a waterfall is more fun than it sounds, Justrun, especially when nobody else is aware it's a race. Gives a great advantage.

Isn't that hippo fabulous, Dguzman? It was part of a large exhibition of 25 Zimbabwean stone artists.

I think Jesus could pull it off, Al, but not too many others, I'm sure.

We were plumb out of opiate cordials, Gifted, although somebody did bring a bottle of lime cordial, but it's just not the same.

It's fun winning, even if no one else knows it was a contest :D It sounds like you had an amazing time...can I be nosy and ask why you call yourselfs the Marthas??

It's a rather long story, Steffi, but the name is a reinvention df a group of Marges that I hung with when I lived in Ontario.

I want that hippo sculpture! It is a hippo, yes?

A a gaggle of Marthas trumps a google of geniuses.