ear to the internet, eye to the screen

I've been rather immersed in the Daytrotter sessions today, and many thanks to our man in London for bringing this great site to my attention. My head is virtually swimming with all the new music I have been absorbing. I fear that tonight my dreams will be populated by Harry and the Potters dueling Okkervil River for the right to sit next to Basia Bulat in order to listen to the Walkmen sing Leonard Cohen covers. Or something similar.

And yet, my greed knows no bounds. I still want to get my hands on the new cds by Martha Wainwright, the Awkward Stage, and Emmylou Harris. 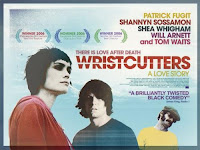 This particular weekend was a wash for getting any film watching done, but last weekend we watched a curious little gem - Wristcutters: a Love Story. It has the rather unique premise of a purgatory populated entirely with people who have committed suicide. In this purgatory, suicides linger in an existence very much like the one they just left, only much crappier and seedier.

Zia finds himself in this desert landscape of rundown gas stations, abandoned cars and scuzzy bars after he cuts his wrists following a breakup. Here he befriends a Russian gypsy punk musician, who, with his outrageous mustache and larger than life (or perhaps, death) personality, is quite obviously based upon Eugene Hutz, frontman of Gogol Bordello. On a cross country trip in a car that contains a portal to a black hole under the front passenger seat, they pick up Mikal, a hitchhiker who claims she is there by mistake and is in search of the People in Charge to plea her case to return to life.

I don't even want to get into much more plot explanation as, on paper it all sounds rather confusing, but there are searches for lost loves, budding new loves, mute throat singers, messianic kings, Tom Waits, government agents, and a camp in the desert where daily tiny miracles occur.

Wristcutters is a wistfully funny film. The three main characters are all highly appealing and the supporting characters are quirky and memorable. The film is peppered with sly little details like a soundtrack that heavily features musicians who committed suicide, and the fact that Eugene is drinking a bottle of Dead Guy Ale while he commits suicide.

This is a highly watchable film, which I know I will be watching again a few months down the road.

What music and/or film would you recommend?
Posted by Barbara Bruederlin at 6:29 pm

Email ThisBlogThis!Share to TwitterShare to FacebookShare to Pinterest
Labels: awesome films, music is my boyfriend

The only movies I've seen recently that I'm recommending to everyone are The Orphanage and The Devil's Backbone. But we may have already talked about this.

I haven't seen any really grand films lately, but from last year one of my favourite indie films was The Lookout, which I think I mentioned to you already though.

And music? Nothing you wouldn't have already heard of. ;) The new Coldplay is actually winning me over, who knew.

The new Death Cab For Cutie is actually awesomely awesome. I've been listening to nothing else for the last three days. So yes,highly recommended. Not forgetting the new Sigur ros! Or old Sigur ros, it's all good.

And as for the MTV awards, yep it's in Malaysia this year,and there's plenty of publicity, and Jared Leto is hosting.I'm trying really hard to be excited here. It's too early for Coldplay to be nominated for anything, so. Naah.

I think i would really be into that movie! Thanks Barb! I've been told that "Joe Strummer; The Future Is Unwritten" is worth seeing.

Well the family flubug has caught up with me! I got halfway to work, when I had to get off the bus and come back home! Bleh!

The Orphanage was so good, Beckeye, I'm still thinking about that one. Chilling. The Devil's Backbone has been added to my list. And if I hate it, of course I will mock you mercilessly.

I remember you mentioning The Lookout, Al, and I love a good heist film every now and then.
That's surprising, but good to hear, about Coldplay. I'll assume it is not another X&Y then?

Truly? Death Cab for Cutie? You people are full of surprises today. I really do need to get up to speed on Sigur Ros, BAP. Tis on my list!
Oh yes, I forgot that turd map Jared Leto was hosting the MTV awards. I wonder if he'll bring his crappy band or just be obnoxious all by himself?

Oh no, I thought you were going to be able to bypass this bug, Mel! Get better soon, I hope you felt fine for your birthday at least.
I would like to see The Future is Unwritten, as Let's Rock Again was so wonderful.

do you get this Netflix service our US friends are always talking about? I don't, and I want it.

Saw The Savages last night. Really liked the characters and direction, although the subject matter was discomforting.

I will add this one to my list. You haven't put me wrong yet.In music and film you have quirky fun tastes.

The last good movie I saw was the documentary Darwin's Nightmare.

I don't know what music or films to recommend, but I just wanted--nay! NEEDED-- to come to this little corner of the universe to say that I'm in high lust for that bass player from radiohead. I just want to love him. Is that so wrong?

Signed,
yours truly and looking for understanding in a harsh and often ugly world *le sigh*

I don't get this fancy Netflix, Gifted, but I too want it and I want it now.
I just googled The Savages and my goodness, it sounds bleak. But sometimes a little bleakness is good for the soul.

I hadn't heard of this one, John, but it sounds like a real eye opener, as all good docs are. Thanks for the tip.

hahaha! Oh Phlegmmy! You made my day (and Colin Greenwood's too, no doubt). From what I understand, Colin is one of the nicest people ever and he certainly is highly intelligent and very well spoken. You could do far worse in your lusting, my dear.

My daughters were just telling me about this the other day. Did Tom Waits have much of a part in it?

Speaking of Eugene Hutz, the Gogol Bordello website says that they're playing Chicago again in August. The venue website has nothing yet, though, nor does Ticketmaster. We're holding our breath.

I've seen only crappyish movies lately so I'll just say, you have to see Wristcutters! :-) I want to based on your description.

Tom Waits actually had a significant role in Wristcutters, Bubs, and he's a very credible actor too.
I hope you do get to see Gogol Bordello. The clips I have seen of their shows look insane! I would love to be there.

I want to watch Wristcutters with you, Dale. We'll get some bagels and some vodka chocolate shakes, invite Honeypot over and it'll be a party.

Music can't be tour boyfriend, it's my girlfriend.

I am adding Wristcutters to IMDB as we speak.

Music is a two-timer, JustA! I think you'll like Wristcutters for the Eugene Hutz-alike and for Tom Waits, if nothing else.

I watched it yesterday Barbara (sans Honeypot) and enjoyed it. A very curious little gem to steal a phrase from you.

I believe Tom Waits should be in charge of most things and I base this on little to no background information about him, it just seems right.