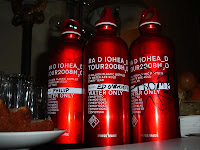 It would appear that Radiohead have started off their North American tour in fine style, with the inaugural concert last night in West Palm Beach.

Here's Thom Yorke, on the abundance of plastic surgery in Florida:
"We spent three days at Miami Beach. Fucking hell! What’s going on there? Some kind of reconstruction! For once I was proud to be white, pale and English."

So what does one do on their lunch break when they are too lazy to think up a real blog post? Why, they obsessively gather concert reviews, of course:
the Sun Sentinel - features photos
the Miami Herald - has some wonderfully snarky Radiohead fans making corrections in the comments. Radiohead fans are scary, but they sure are funny.
"Really? Then please tell me what song was played from the album AMNESIAC!!?? (and don't give me 'Morning Bell'... They played the KID A version....)"
The Spaghetti Incident blog - has the set list
Pitchfork - has some great photos (including the wrinkled white lounge lizard dinner jacket), the complete set list and some shameless self-promotion
And of course the NME weighs in and presents us with that great plastic surgery quote.
There's even a concert clip of The Gloaming, featuring some very fine Thom dancing - those hips don't lie.

update: because I know you just can't get enough of this stuff, here's one from Rolling Stone - with some nice photos of the stunning, yet all LED, lighting
We return to regular programing tomorrow.
Posted by Barbara Bruederlin at 4:00 pm

Email ThisBlogThis!Share to TwitterShare to FacebookShare to Pinterest
Labels: clobbered with Radioheadism

Ok, I've gotta find a way to get one (or a dozen) of those tour water bottles. I mean, I must.

GOB 'n I saw this VH1 Radiohead session, it was like an unplugged thing... WOW holy hell.

Makes me wanna go scale the fences at the amphitheatre the day of the concert, ya know, like kids getting a glimpse of an R-rated drive-in theatre movie...

Exit Music for a Drive-In Film? eh. I'd be jellus if I didn't get to hug you before the concert!!!

That must have been some Looooonnnng lunch break! Did you get any work done today? :P LOL

I had the same thought when I spotted those water bottles, Michelle - MUST HAVE! If they're selling them at the concert I will pick up a bunch for you.
Pitchfork has been shilling a VH1 session that I haven't been able to load, I wonder if it was the same one? I'm going to look for it while I'm all obsessive-like. We've gotta find a way to sneak you into the amphitheatre.

Not a whole lot, Urban. Okay you caught me out, it wasn't just while eating lunch. I was multi-tasking all day.

Quite the collection. Well done. Perhaps while I'm at work today I'll break from data entry to read some of them. That quote is brill though. Good ol' NME. ;)

Tooo...much..Radiohead...brain...hurts..
Bah! Whoever said there was such a thing as too much Radiohead anyway?
Oh.
I did.
I TAKE IT BACK!!

Mehehe that plastic surgery quote is genius! Got to see these guys live before I die.

At last being white and pale is en vogue! I've been waiting for this day for a long time. Finally I can embrace my albino-ness and endear myself to Radiohead fans!

I wonder if he's proud to have a wonky eye, too.

Some of those reviews are an entertaining read, Al. My favourite bits are the over-the-top Radiohead fans who get all steamed at perceived snubs. Solid gold, that.

Your gotta see before I die list sounds similar to mine, BAP. And I am still so excited that this summer I will cross off my #1.

Bless all the pasty people, Strawberry Blondie! And you know that after that remark, pastiness WILL become tres chic amongst a select group of rabid fans.

hahaha, god I hope so, John, it's one of his more endearing features.

how many sleeps till zombie sees r'head in Seattle. That's the review I'm awaiting.

Listening to my local college station and the cover of Just by Mark Ronson (featuring Phantom Planet) is on. Wow. It's amazing. Goggle it or something if you haven't already heard it.

Oh lord Gifted, don't even get me thinking along those lines, I'll become even more OCD than I already am. It's over 3 months away is the closest that I am going to break it down to at this point. But I am glad you are anticipating the review, which you KNOW will be coming.

I have heard it, Pokecheck, but had forgotten that I have. There's a video for it as well, which is quite neat. I don't know if Ronson actually made the video or if someone just used his cover.

Am I supposed to find that set list arousing?

No,JustA, you're supposed to find that photo of Thom in the white dinner jacket arousing.

But you can blame me for that as well, if you like.

Don't you think it's interesting that you never hear Radiohead on the radio? (Except the occasional "Creep.")

15 billion!! Wow, that's staggering. And I think my household is responsible for buying 800,000 of them. Very cool water bottles.

Aside from the irony if not hearing a band called Radiohead on the actual radio, I am not all that surprised, Beckeye. I never hear the bands I like on the radio (which I why I don't listen to radio), with the exception of the dear old CBC who do frequently play my boys Final Fantasy, the Weakerthans, Hawksley Workman, Cuff the Duke.

I make my family use theirs over and over and over again until they fall apart in the dishwasher, Deb, no doubt releasing toxins with each washing.
But those Radophead ones are cool bottles and I want one!