lady in the radiator 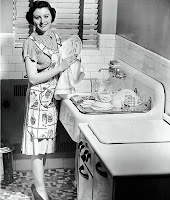 The lovely rain that I woke up to this morning made me feel all cocoony and domesticy, and as luck would have it, I did not have to work today, so I was able to indulge in this rarity.

I've been feeling the need to vacuum the house, which is strange, as I can generally ignore a sticky, crunchy floor forever, even though I cannot bear eye-level clutter. But I think this domestic drive all began a couple of weeks ago when I caulked the tub surround in the main bathroom and had to use the Spousal Unit's personal man-shower in the basement for a couple of days while the caulking cured. I'm pretty sure it's coming up to a year now since I went in with hazmat gear and cleaned the man-shower as a Father's Day present , because stepping all nice and clean out of that shower onto a bathmat that more resembled a litter-box than anything else made me suspect that perhaps nobody had actually been doing any maintenance in the basement.

And then this weekend, as I was lying on the basement floor stretching after a workout, I felt something in my hair and reached up to encounter some chunks. And that's when I realized that I was lying with my head on the exact same spot on the carpet where the cat puked a couple of days before. I guess I didn't clean it up as well as I thought I had.

You know you are not much of a domestic goddess when it takes dried cat puke in your hair to make you haul out the vacuum cleaner.

And I was thinking that a nice rainy day like today would be the perfect time to tackle a couple of memes that I am way behind on. Bloody Awful Poetry recently got me with a meme that ties in nicely with oneof my favourite pasttimes that I like to call "weird shit we talk about in the urban assault vehicle". And Bubs tagged me with a meme that continues a storyline which he ended on an intriguing note and which I am itching to expand upon.

Sadly, however, there are still only 24 hours in a day and I haven't quite finished constructing that Tardis, so I will have to leave those memes for another day. A day where I don't waste my time shoving a lame sucker of a vacuum around the house.

I did manage to make a killer beef roast for my grateful family tonight though, even though I got the distinct impression they were rather happy that I ran out of time to make a barley casserole. Ingrates.

We're off to The Hives concert tomorrow night. As usual, I do not feel like going anywhere, especially as it's been months since I have been to a concert and I am feeling completely out of practice. But I understand they put on one hell of a rousing show. Details on Friday.

Posted by Barbara Bruederlin at 7:07 pm

Email ThisBlogThis!Share to TwitterShare to FacebookShare to Pinterest
Labels: 50s housewifery, I'm stuck in the Tardis, living with biohazards

O.M.G. I really should have put on a depends before reading this post because I'm laughing so hard right now at the mental image of you with cat puke chunks in your hair I may lose control. Bladder control that is.

And the litter box bath mat, seriously --- needs to be marketed.

Me thinks we should have gone for coffee today. I could have propelled my ass off the couch and saved you from doing any housework.

Blondie
PS Are you talking about the same rain as we had at my house? The curtain blowing, heavy downpour that lowered the temps and spread gloom and doom?
PSS Have fun at the Hives concert!

Oh my God, you are going to the Hives tomorrow! I am so excited for you! I hope you love it!

Could you just yank out all the carpeting? Rugs are sooooo much work bleh!!!

You are totally the WifeSupreme. I'd NEVER clean a shower totally devoted to GOB. omg. I don't even do toilets, and I live in a house with 3 girls out of 4 people! :D He gets toilet duty. Each & every time.

I hope the Hazmat suit served you well, brave soldier.

Although The Hives said it first, I'm using their lyrics as my claim to just how much you rock. Especially before I've had too much & can't focus anymore.

(Radiohead keeps slipping in... they're the ultimate earworm...)

Going for coffee today would have been the sensible thing to do, Blondie - saved us both from ourselves. Sadly I hardly ever do the sensible thing.
And yes, that exact same rain! I loved it, which is why I suspect that this semi-desert we live in is not the right place for me.

I hate carpeting, Mel! It's just a giant petri dish, as far as I'm concerned.
And I think it was your enthusiasm over the Vancouver Hives show that made up my mind to go to this one. I'll keep you posted.

GOB does toilets? Every time? Michelle, the stature of that man is just keeps growing exponentially. (But then he does have to keep up with his lovely partner, doesn't he?)
I figure I can don hazmat gear once a year to honour father's day. I just close my eyes and think of England.
Come back and focus again: now I'm throwing Radiohead lyrics back at you. But you knew I would.

The Hives!! Have fun!

Oh and which meme are you referring to here? I have totally lost count.

Ugghhhh cat puke..I have never seen cat puke, and I hope I never will.

I think its for this reason that I hated showering as a kid. I'm much cleaner since I moved out.

Just how bad can his shower be? Surely you exxagerate

Dried cat puke in your hair. That's a new one. Even I, notorious for letting things go until they start walking on their own, have never done that one! Thanks for the hilarious start to me day Barb!

And you've got Hives? Probably from the Man-Shower.....

Yay Barb! I too was inspired by the rain to do some cleaning yesterday...however it took me til the third straight day of rain to break down enough to do so, but now I am glad I did, everything is non-dusty and shiny...for a day or two anyways :) I am sorry about the cat puke in your hair, but thanks for the laugh :)

Have fun at the concert. I have never heard of the hives.

"You know you are not much of a domestic goddess when it takes dried cat puke in your hair to make you haul out the vacuum cleaner."

Hahahahahaha....true! Take your time getting to the meme, it'll still be there when you get back. In the meantime, enjoy that Hives show! The eldest and I saw them a couple years ago with Franz Ferdinand and I was amazed at how good the Hives were live. They were awesome.

How is it even possible to have never seen cat puke, BAP? Obviously you have also never seen a cat in the process of puking, then? They're hilarious, especially if you try to drag them off the carpet in mid-puke.
It's the meme with the fictional characters and the list of questions about them.

I think those rules would sort of put an end to my showering as well, Al. I'd be going over to the neighbours.
We didn't have a shower when I was a kid and as the youngest I had to bathe in the cold dirty water that my sibs left behind. I think thst's why I don't like baths to this day.

No seriously, you should have seen it, Kelly. We almost had to call in the army.

Maybe your cats will oblige you one day by leaving dried puke in strategic locations, Karen. You haven't lived until you've had that experience.

Dusting. Yeah, that's something I'll have to tackle another day. Thanks for the reminder, Steffi *said sarcastically*.
The Hives are Swedish garage rockers. They've been around for 10-15 years and are known for their wild shows. SHould be fun!

I have never heard one negative review of a Hives show, Bubs. It's great to have that confirmed yet again. I'll let you know how the show went. And I'll do your meme this weekend.

The Hives live are REALLY something to see. Quite spectacular. Second to none really. One of the best live shows I've ever seen. Kinda brief (under an hour) but that was before this last album came out so maybe its longer. I've never seen a group of musicians who are so in sync with each other. When one steps back or shakes and swings around the rest of the band has already anticipated it. Totally flawless. I can't say enough. Besides Howlin Pelle is one hell of a frontman. Plus the songs are really fun to sing along to.

One minute it's Radiohead
the next it's
Cat puke head

Ya never know what's coming on this blog

Well now I really am pumped to go see them, Will. I was really tempted to stay home tonight, but you've succeeded in convincing me that it's worth heading back out into the rain and going to the other side of the city again. Gotta see that sync band!

Heads R Us, Gifted. You always get a Head at Bad Tempered Zombie. We give you ... okay, never mind that one.
But we do aim to confuse and perplex.

I'm still vacuuming up pine needles. From '06 I think. God, what's the point?...I mean we clean it and then it just needs to be done again. I'm way too busy for housework.

The Hives should be a blast...we're waiting on a full review. :)

funny you should mention a tardis, because we've been house-hunting and I've been thinking that a tardis would be perfect....I like the fact that it is infinitely large on the inside, but portable on the outside. Smart idea. Also, I think tardis' are self-vacuuming and let me just say now that I never ever get an urge to vacuum.

I'm not sure how many 50s Housewives ended their day with a Hives concert. Too bad though. Would have provided much more of a release than Paul Anka.

Is there anything more angering than stepping in (or lying in, I guess) cat puke? I swear my face goes red and steam comes out. I also vow never to own a cat again after this one. And here's a disgusting hint from Heloise: if your cat pukes on the carpet or rug, leave it until it dries. Then most can be picked up while the rest simply vacuums away. It avoids rubbing it in and having a nasty stain. Of course, it also causes one to forget all about it until a guest points it out.

I hear you, Deb, sometimes I think it's time to pack it all in and move into a dirt-floor yurt. But would my wi-fi work there? Hives review coming up!

If you find some tardises (tardi?) for a decent price, let me know, Mister Anchovy. I may just move in next door. I was quite disturbed to feel this vacuuming urge. It's a gate-way activity. What's next? Curtain washing?

And those guests are so helpful at pointing these drying piles of cat puke out, aren't they, John - bless them.
Had the Hives been around for the 50s housewives, the world would be a different place today.

So, do you have Hives now? Have fun! Cat puke as a force for greater good, who knew?