in a jack-knifed juggernaut, I am born again

My right shoulder is quite sore today, which isn't unexpected, given the mad flurry of raking I did yesterday. In fact, my right shoulder is often a little stiff and sore, and I attribute that to overuse, on account of being decidedly right hand dominant.

I don't know why I always use my right hand to do tasks, I mean it's not like most of these tasks take a great deal of coordination or concentration. Habit, I guess. Or laziness.

So today I am trying an experiment. I am trying to do all one-handed tasks with my left hand. Okay I'm not going to chop vegetables with my left hand or anything, I don't have a death wish after all. But certainly wiping, scrubbing, grocery loading, reaching, glass-lifting - these can all be done with the left hand without straining my wee brain too much. I have discovered that tooth-brushing is actually a little cumbersome with the non-dominant hand, and we won't even get into other issues of hygiene.

The way I figure it, at the very least my shoulder will get a little rest today, allowing me to abuse it all over again tomorrow, and in the best case scenario, I will develop new neuronal pathways. And if rewiring my brain is going to make me smarter, I am willing to spill a little yogurt on my shirt at lunch or miss that stalagmite whilst cleaning the microwave. 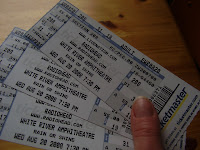 honestly didn't expect me not to mention that, did you?) I will be counting down to that glorious day in August when I will be waving these in one hand and in all likelihood clutching my chest with the other. (Will I use my dominant hand for the tickets or the heart attack, I wonder?)

If you are lucky enough to be at the Cruzan Amphitheatre in West Palm Beach, Florida tonight, I expect a full report in the morning.

For this tour, Radiohead have added a new section - the most gigantic flying mouth for some time - to their site, which will be dedicated to assessing the carbon toll that the tour is taking. It features a carbon calculator (no, I haven't calculated our trip yet) for assessing various options of arriving at the venue, public transit information, and weekly postings on how the band has addressed their own footprint, as well as steps they have taken to make it easier for the audience to reduce theirs. One of the aims is to encourage dialogue into innovative ways to reduce the toll we are taking on the planet while still enjoying things like Radiohead concerts.

Cool, eh?
Posted by Barbara Bruederlin at 11:15 am

Email ThisBlogThis!Share to TwitterShare to FacebookShare to Pinterest
Labels: countdown to the most important show in the world, my handedness is getting out of hand

I did the switch from right to left mousing. Worked well. I've switched back again to keep it evened out.

According to today's news report all your hard work to rewire your brain will be for not if you weren't breastfed to begin with.

I was thinking of you while I was doing my handedness experiment, Gifted, as I remembered you making the switch and often wondered how that worked out. So are you mousadextrous now?

So I've heard, Urban and that may explain why the Resident Offspring is 7 gajillion times smarter than I am. She owes me now.

It'd be a hell of a lot cooler if they'd come here. Hell, I'd buyt hose hippes some carbon credits.

When I broke my right (dominant) wrist several years ago, I made a play for becoming ambidextrous. It sorta worked, but I think that's more of a defense mechanism that shielded me from humiliation screaming out for recognition, hah..

hey sweetness, get that shoulder better soon. As a matter of fact, start working those deltoids & biceps for all you've got... you have massive fist pumping to do come late August at the WR Amphitheatre!!!!!

Cinco de Mayo - I'm SO glad I never got the shot with the worm in it... it's funny as hell when someone else does, tho...

Earth-friendly is so fucking sexy.

How was the switch? I'm rubbish with tasks involving my left side. Although it'd be interesting to switch things up, as my right arm does get sore a lot.

Its so exciting to get tickets in the mail! I got mine for the Brighton Music Fest the other day. :)

And like Gifted Typist, I did the mouse thing too at work for a while. I had an ergonomic assessment done and the woman said I had to. Surprisingly, it didn't take long to get used to.

I know, you have to go to Chicago or Toronto to get to a concert, JustA, which is hard to do using public transit. If those hippies came here, they could stay at my house.

You're right, Michelle, fist pumping shall be required to show my support for my eco-warriors. I shall start working the deltoids again tomorrow, as the shoulder feels pretty good today.
Did you maintain any ambidextrousity after you went back to your dominant hand? I imagine the brain is far too plastic to maintain those unused pathways though.

I'm so not used to getting tickets in the mail, Al, as I generally schlep down to the local ticketmaster to pick them up. I was terrified I was going to toss them out as junk mail! Yay for that amazing Brighton festival!
The switchover had varying degrees of success, depending upon the task. And I kept forgetting, more evidence that my brain needs a workout.

Your brain must be a lot more plastic than mine, Karen, plastic in a good way that is, as I am only too happy to use my dominant hand again. I'm not bad left mousing using the mouse pad on my laptop keyboard though, I guess because it's more central.

I am days behind you Barb, but just wanted to mention golden flaxseed as an alternative to soy. Apparently chock-full of lignans which are the best available source of anti-cancer and phytoestrogenic compounds. So says Marianne Northrup in The Wisdom Of Menopause.Did I really give you that cookbook at your young age??
Berni

Will you still love me if I admit that I'm not going to Radiohead's show this week? The show sold out in a snap, before I could get Ticketmastered.

My left hand is pretty useless. I can't even flip people off with my left middle finger.

Good luck doing things with your left hand, I tried once, and it was not successful at all.

I looked at tickets for Montreal's show of Radiohead and I don't get it but you can still buy some, of course it's an outside show in a huge park but still, it's Radiohead. Hope you'll have fun when you'll see them.

You did, Berni. You are obviously a visionary. Golden flaxseed, eh? Does one need to pick their own?

Au contraire, Beth, I feel your pain, as I feel I just squeaked in, even with all my war room planning tactics. But at least it wasn't R.E.M., right?

Naturally I immediately tried it to see if I could, Beckeye and ended up flipping off my coworker. Apparently I am ambidextrous in that regard anyway.

There are a few venues that aren't sold out completely, Evelyne, but I think they are mainly just single seats, scattered here and there.
And I have given up the left handed experiment for now.

I did lose a measure of ambidexterity after a while in that I couldn't write so legibly anymore... but the neural re-wiring kept itself flexible during my yrs playing the oboe so that was cool as hell.

Still, the case of the ambidextrous oboe player conjures up some delicious images, Michelle. This will be my mental avatar of you now.

Ah, the sore shoulder, I knew it once very well. Oddly a cortisone shot years and years ago for shoulder pain that had plagued me off and on since high school took away all my troubles for good. I know the shot is not supposed to do that but in my case it worked better than expected.

Shoulder pain is odd, isn't it, Leazwell. At least in my case, it's something I can ignore, but it does limit my arm mobility a bit. I'm glad to hear the cortisone shot did the impossible for you. The less chronic pain. the better.

I know there is so much more to this... but I have to say, you have the best titles ever.

Thanks Justrun, it's amazing what you can come up with when you steal song lyrics. Why reinvent the wheel, right?