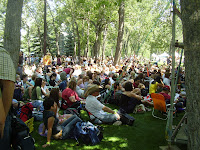 A few days of spring would have been nice.

Going directly from snowfall at the end of last week to a forecast high of 29C this weekend is a bit of a shock to the circuitry. With no time for acclimatization, we are putting our winter boots away in the basement (for the third time this spring) and slapping on the sunblock. And the odd and disturbing part of it is that there are no leaves on the trees yet. It feels wrong to be sweating in the blazing sun while staring at bare branches that are just starting to sprout the smallest of buds.

But that is the last of the complaining that you will hear from me. The whole family has the day off today, making for an extra long Victoria Day weekend (and for my non-Canadian friends, a bit of a primer in Canadiana: call it "the May two-fer" and you will fit right in).

The Spousal Unit is off test-driving his new manly truck on the first of the manly fishing trips of the season, and the Resident Offspring and I are going to buy our Calgary Folk Music Festival passes today.

The full line-up was announced yesterday and it is a real winner! Those of you who have been visiting here for a while know how much I love the Calgary Folk Festival and I have to tell you that once again, the festival organizers have come through with a fabulous lineup.

Some returning favourites that I am thrilled to see back on the island:
- the Weakerthans (I'll try not to accidentally stalk John K Samson this year)
- Great Lake Swimmers
- Ani DiFranco
- Bedouin Soundclash

Some artists I have not seen at the festival before about whom I am uber-excited:
- Andrew Bird
- Calexico
- Basia Bulat (have seen her before, but I think the folk fest setting is perfect)
- the Be Good Tanyas
- Carolina Chocolate Drops
- the Consonant C
- the Handsome Family 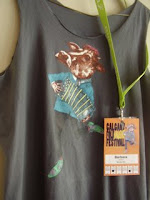 And of course, there are always those musicians that come out of nowhere to completely blindside me with their awesomeness. I love those kind of surprises.

I can't wait!
Posted by Barbara Bruederlin at 9:20 am

Email ThisBlogThis!Share to TwitterShare to FacebookShare to Pinterest
Labels: and I volunteer so I get in free, book your flight to Calgary right now, calgary folk festival

Our summer kind of arrived here today, finally, as well. Hey, that festival sounds great--enjoy, especially, Charlie Musselwhite and the Handsome Family. The Handsomes used to play in Chicago all the time in the 90s, unfortunately at a time I had small kids and didn't go out much. I think you'll really enjoy them.

And, if you have time, you've been tagged

You and your many music festivals. I'm jealous, as usual.

Victoria Day = Those Filthy Americans get Memorial Day Off, So We Need Something Too Day. :)

What a great lineup. You'll really enjoy Andrew Bird and The Handsome Family.

Another ... yet another ... killer lineup for the folk fest. One of these days I NEED to road trip and attend. I wonder why Bright Eyes is all of a sudden Conor Oberst these days. I guess you can't keep your childhood nickname forever.

I am guilty for never going to the Folk Festival as I dread sitting on my ass on the ground for so long. However, I came this close >>> <<< to going last year as we had some free tickets.

I may attempt to go one of the days this year. Do you know where I can get that fancy ass sling the cowboy in your picture is sitting in? That looks like it may be the ticket.

Are you going to Sled Island? DD is volunteering at that one and she said something today about writing part of the program.

I had the same issue in the 90s, Bubs. Consequently I will never quite forgive the Resident Offspring for keeping me from discovering Radiohead when they played a small venue in our town.
I am looking forward to seeing the Handsome Family a lot and I know The Spousal Unit will love Charlie Musselwhite.
The tag looks fun - I'm there!

I'm shocked that you don't put on more music festivals in your city, JustA. I mean you guys are practically Canadian!

We loves us our V Days around here, Beth,and happy M Day to you!
I am quite chuffed to see Andrew Bird! And my darling Great Lake Swimmers again.

He's all growed up now, Will. He even gets to play music outside now.
You really have to come up for the folk festival sometime. It's nice here in the summer! Mind you, you are having a killer festival of your own this summer, aren't you? And I think I've even heard of the headliner.

Don't let a sore bum keep you away from the best experience of your life, Blondie. The folk fest is about so much more than the music too.
Those festival chairs can be had at Canadian Tire, but they tend to sell out early. They also sell them at the folk festival at the Campers' Village tent. We each have one and they are so comfy and have literally saved my ass every year.
We are going yo Sled Island again, but haven't bought our tickets yet as we would rather go to select shows rather than get passes for the whole weekend (as some of them are in +18 venues) or go to the mainstage shows.
But I guess we have to wait till June 1 to find out who is playing where. Unless you have some insider information?

B Soundclash are great. I've seen S. Roberts - great live show - and Charlie Musselwhite who was also fantastic. Lots of other good stuff in there.
BTW, this week I'm seeing Dylan. How does he rate with the Indie-lovin' crowd?

Andrew Bird! Conor Oberst! BASIA BULAT! I am very jealous, naturally, but in the spirit of good ole music-lovin' ,have fun!

Well he's simply a legend no matter what side of the musical fence you're standing on, Gifted. We expect full details on your encounters with Mr Zimmerman.
Yup, I am pretty pumped for the folk festival this (and every) year.

That's the folk festival spirit, BAP! With generosity like that, you would fit right in with the hippies and me on the island.

You're breaking your own weather talk rule. ;)

Andrew Bird??? Yay!! That's going to be a good show, I await your review already. :)

Great line up again! The only one not on your lists that I'd like to check out is A Hawk and a Hacksaw.

I know, I've been breaking the weather talk rule all over the place, Al! I guess the May two-fer is no time to try to supress my Canadianity.
I have you to thank for introducing me to Andrew Bird, so I'll be watching him for you.

If I'm remembering them correctly, John, the former drummer for Neutral Milk Hotel is in that band. Very strange and experimental sounds. Could be great!

(Methinks your blog is eating comments.) Let's try this again... What am AMAZING lineup!
You are in for an absolute treat with Andrew Bird. (You may just end up with another favourtie musician.) Then there is my girl Basia. Truly sublime and whole lot of fun. Her enthusiasm is contagious.

I do hope you take your camera to document this wonderful event. And for the record, I am very jealous. ;-)

This ding dang freaky weather has me so confused. I'll take the sun though..sooo sick of winter weather. OMG, I so would love to see Sam Roberts. and most of the bands on that list. Some I haven't heard, but Im sure would love. Have a great May long weekend Zombie Fam!

PS Listening to Devotchka as I type this ;O)

Sean,I am going to let the Resident Offspring take the photos, which is always the wisest move around here, but you can be assured there will be more photos than you care to look at.
I did see Basia Bulat open for Final Fantasy, and while I enjoyed her show I think that she will really shine in a folk fest setting.
And so many people are excited about Andrew Bird (whose music I am only slightly familiar with) so I am pumped to see him, just from riding on the wave of antici ... pation.

I hope you have a great May long too, Mel, and I hope you actually get a long weekend.
Now they are saying it's going to get cold here again later next week, which would not surprise me.

get ready to be blindsided by Josh Ritter - when he came to Edmonton in Feb, WOW. One of the best live shows I've ever seen...

Anyway, Josh Ritter + Andrew Bird = me driving up to Calgary for the festival

When you went to the Calgary Folk Festival last yr (I think it was?), you waxed poetic over the fried cheesecake that you didn't have, but Eva did if my memory banks partially serve correctly...

Baked Alaska was so... disappointing. But how can fried cheesecake go wrong?!?!?

The Weakerthans. But of course! It's not accidental stalking, btw... it's KISMET. ;)

I have been hearing whispers about the awesomeness of Josh Ritter, Stephanie, I'll certainly go listen to his sets.
Yay! I'm so glad you are coming to the folk fest! If you haven't already been to this one, you are going to be blown away by its fabulousness. I'll be working in the record tent, I hope you will drop by and we can meet!

Oh, you're thinking the Calgary Stampede, Michellemydear - that is the emporium of food that was never meant to be. I can't remember if Eva did try the fried cheesecake, as she isn't a cheesecake fan, but I will query her on that.
The folk fest actually has fabulous food! Curries and salads and iced coffees and falafel and vegan stuff - yum. Plus they do plate recycling (real plates that you pay a $2 refundable deposit on) and use biodegradable beer cups in the beer garden. They do everything right.

Yes, a total shock to the system here as well. I think it hit 900 yesterday.

I don't have ANY summer clothes and stealing a way too small t-shirt of Lindsay's (that cut under my armpits) was the only option. I must shop. Blah.

You must be totally stoked about the Festival. Awesome.

A little bit of spring wouldn't have been too much to ask, would it, Deb? It's tough to go from winter boots to barefeet in less than a week.

Hah, man... figures I got all the details wrong. My apologies!

But all that hippie food - mmm... the waves of divine music & the intoxicating smells, it must be like living nirvana.

I'm not sure I've ever heard of anyone not liking cheesecake until your beautiful rare bird Eva. That is SO cool! Really!!! I must have definitely hallucinated that memory.

There was definitely talk of fried cheesecake, Michelle, you certainly got that right. I'm morbidly fascinated by the thought too, just not enough to actually go down to the Stampede grounds.

But yes, the folk fest is the best place on earth. If you folks are ever looking for a travel destination, you could certainly do far worse than Calgary during folk fest.