obviously, Wayne, you're expecting me to feed my family dog food 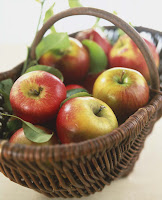 In breaking news, I appear to have switched apple variety allegiance. Word.
For decades, Spartan were my default apple and yet for the last few months I have been finding myself bringing Royal Galas home from the grocery store.
Shocking, I know.
-#-
The Spousal Unit traded in his old truck yesterday for one that will be imminently more suitable for those Manly Fishing Trips. In fact, I believe it will make him the manliest man on the Manly Fishing Trips. 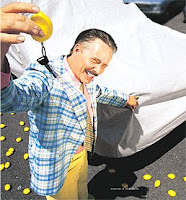 I accompanied him to the final negotiating session at the dealership yesterday. I was there ostensibly to offer moral support and to play good cop, bad cop if the situation called for it. Instead, it was more like bad cop, no cop.
I was way out of my league, and could only sit there in silent admiration as my man played his cards patiently, yet firmly. He didn't exactly say "you're breakin my balls, Chuck, breakin my balls", he is a sophisticated businessman after all, but I'm sure he came close. He did inquire as to whether he was expected to feed his family dog food, though. Honest and for true. We walked out of there with a deal that they will be talking about for years.
Mind you, it took three hours to get there, and every time the salesman would leave the room to confer with his manager, I would give a body language update, as I could see directly into said manager's office. "He's got his head in his hands ... now he's rubbing his face" were my only real contributions to the negotiations. I'm more of an EQ kinda gal anyway.
No wonder the Spousal Unit is such a great poker player, even if he hates the damn game.
Posted by Barbara Bruederlin at 5:52 pm

I'm partial to the Grannies and the Spartans myself, although I've been known to eat Galas. As long as their not those horrid Red Delicious (I think that's the type...?) I'm cool. You know the ones I'm talking about...they've got those big bumps on the bottom. Tough dark red skin. Mealy insides. Yuck.

To me, apples are apples. They're okay, but they've got nothing on oranges. And grapes have them both beat.

I was a spartan fan too until I discovered Galas. But I'll take a pint of raspberries over any fruit any day.

I loved your Spousal Unit's negotiation and loved the pic, LOL!

Have to tell you though Evil Poodle Puppy's food is damn expensive and you could eat worse.

Can I borrow him when it comes time to negotiate for the Hope Diamond? I bet, with J on my side, we (ok, HE) could get the Smithsonian down to a cool buck or so. With change.

Forgive me, Barb. I have sinned. At one point in the dark, dark past I sold used cars. Rather, I was employed by a company that sold Used Cars as a Used Car Salesman. I was simply unable to sell a damned one. It's just a vague memory now...like dreaming that you are the Alan Arkin character in Glengarry Glen Ross. Except with more exhaust. And rednecks.

I also sold mobile homes. I am so ashamed.

Oh my God, I thought my father had started a blog of his own. He knows all about the different varieties and will give you a lecture on how we are losing the old varieties for these fancy new but inferior varietes. Galas belong to the inferior classification.

I detest oranges. Apples are more my thing. With grapes coming a close second. Put a pear under my nose, however, and no other fruit can possibly compare, with the possible exception of mango. And maybe watermelon.

Royal Galas are the sh*t.

I likes me the Royal Galas but everyone else in the family wants the old fashioned and lowly McIntosh.

She's a bad tempered zombie with a fickle apple fetish.

Galas rule! They are my fave by far.

And way to go on the Intimidation Factor at the car dealership. That is an undervalued presence!

Yuck, I'm with you on that, Karen, red delicious do not live up to their name. Mealy bastard apples!

Apples are pretty utilitarian, I agree, Beckeye, they're good if you are hungry, but I'm all about citrus for flavour.

haha yeah I think that saying harks back from the day before our dogs were better fed than we were, Urban.
Aren't you impressed that I was able to snap a pic of the car salesman?
Mmmmm raspberries are the best of the berries!

I've never heard of Cameos, Micehell. Are you sure you aren't getting apples and cigarettes mixed up again?
Jerry could get you that Hope Diamond and a can of tuna thrown in gratis.
I'm sending you good surgical karma today!

I wonder if a picture of a Fuji apple, taken with Fuji film would turn out extra delicious, GOB?
I would have bought a used car from you! Mobile home, not so much. I sure hope you didn't leave that job via a Glengarry Glen Ross sales contest.

I guess your father would have a lecture or two to lay upon me, if he ever found out I've been eating an inferior newfangled variety, Toccata. I am so ashamed.

I had no idea that fruit was such a polarizing topic, BAP. I hope nobody bloodies anybody else's nose.
Pears are the best when you are sick. True story.

Excellent advice, Al, in apple choices and in car deals and in life. Also, never apologize and never explain. Some day I will take my own advice there.

The Macs may be old fashioned but they sure do have an interesting history, John. And to listen to folklore, they practically singlehandedly colonized Ontario.

Yes, god knows what sort of apple I will be eating in 20 years, Gifted. Probably gumming apple sauce actually.
Do you know the story of the Mac in Ontario?

The Spousal Unit certainly has scads of presence, Justrun and he's not afraid to use it.
I'm eating a Gala right now!

Red River Carts played an important role in history too.

I used to be a spartan apple person too. Now I live on the wild side, and often buy different varieties heee!

Congrats on the new truck to the manliest of all mens :O)

It's true, John, but I cannot remember the last time I ate one of those. Be fun to drive one to Safeway though.

You rebel, Mel! Next thing you know, you'll be trying mango gummies or something crazy.
The manliest of all men is right pleased with himself.

no I do not know that story
Should I?

While celebrating the discovery of DNA, spare a thought for Rosalind Franklin.Her research and data were used by Crick and Watson without her permission. They used her photographs of crystals to make their discover.

Watson later 'dissed her in his book on the discovery after. Called her a frumpy woman, amongst other things.

She died of ovarian cancer in the mid fifties.

The book I read is called Dark Lady of DNA by Brenda Maddox. Worth a read for anyone interested in "the rest of the story"

Perhaps not, Gifted, but apparently every McIntosh apple has a direct lineage to a single tree discovered in 1811 by John McIntosh on his farm in Dundela,ON. So that's kinda cool.

And I think I am going to look for that book. Working in science, I am too well aware of the inequities in the system. And I do understand that Watson and Crick considered themselves to be rock stars.
Thanks for the headsup.

Sorry BB, I think I posted that comment on the wrong post.
oops
But the book is a great read.

I found you anyway, Gifted!

I haven't tried those, Deb, but I have an issue with the name. Too froofroo!

It's me, Bev, I have forgotten my password to this thing! lol So, with respect to the manliest man on the fishing trip...new truck and all...there may be fights this year...Lar just went and bought himself a new truck too!!!! hahahaha

Oooooh, it's gonna be a dog fight, Bev! I can just see the menfolk now, peeing all over each other's tires and such. Hope someone brings a camera.