I fail at presale

Note written to the school this morning:

Please excuse Resident Offspring from being late for class this morning.
Her mother was battling Japanese Radiohead fans.
There has been far too much suffering lately at the hands of internet ticket sellers. Gifted Typist recently recounted her horror story at trying to score Bob Dylan tickets, and I knew I would be in for the battle of my life trying to grab Radiohead presale seats, but obviously even I underestimated how seriously lacking I am in internet battle skills.
.
I started checking the ticket site shortly before 6 am, and sometime between 7:10 and 7:30, tickets went on presale. Obviously the entire known universe was trying to access the site at the same time, as I kept getting booted off.
. 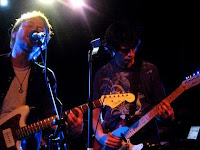 At one point I came thisclose and was actually able to click "find tickets" in the 100 level section. So tantalizing! And then I found myself booted off again.
Eventually I had to admit that I really really needed to leave right now to drive the RO to school, and when I returned 40 minutes later (record time, I assure you), the seats were sold out.
So now I shall be sharpening my elbows to battle the unwashed masses for the general sales. I've got a couple of days to plan my strategy. And maybe upgrade to super-duper NASA-speed connection. Or get superhero powers.
Posted by Barbara Bruederlin at 9:54 am

Email ThisBlogThis!Share to TwitterShare to FacebookShare to Pinterest
Labels: I WILL see the most important band in the world, zombies suck at internet battles

Sorry to hear that you didn't get the Radiohead tix. What a nightmare but that just goes to show how popular they are. Was this for a show in Calgary?

Funny, I got my 7th row centre Tom Jones tix no problem.

Oh maaaaaaan! That totally sux :O(
Make sure to light candles, and wave a rubber chicken over your computer before you start the ticket search...well it can't hurt right?

I didn't know about the pre-sales.
It wasn't mentioned in the ads.
I had lots of responders saying "you stupid b*tch, you should have used presales. I got front row centre blah blah.

Internet ticket sales sometimes feel like those first attempts to fly a plane. Lots of crashing and burning

I suspect that Mr Jones personally intervened to ensure that you got premium seats, Karen. It's the only reasonable explanation.
But sadly, no, Radiohead are not coming to Calgary. This was for the Washington show.
Hey, fancy new avatar!

Oh shit! I forgot the rubber chicken. D'oh! Well no wonder. Thanks for the reminder, Mel, and the sympathy.

It's beyond frustrating, Gifted. To be honest most of the shows I get tickets for are standing only, so there is no real panic to get the first tickets. Which leaves me poorly equipped to deal with those real crisis situations.

Completely, Kelly. But I shall not give up!

I feel for you. I have never been successful at getting presale tickets in fact my experiences mimic those of Gifted Typist only with a less successful ending.

But I was successful getting excellent Bob Dylan tickets a few years ago, where I could actually see his face yet wasn't on the floor.

His concerts are so amazing that I'm sure Gifted Typist will have a wonderful time nosebleeds or not!

That's rubbish, Barb. Sorry to hear you were unsuccessful, fingers crossed for general sales! Perhaps if you had a few people trying to help you buy them? I remember doing that once for a concert, there were five of us and eventually it worked.

yes, the more the merrier when it comes to ticket sales.

i assume you are trying for vancouver. it's not a seated venue so at least that worries over.

Good luck. Thom should really comp you some front row seats with some backstage passes plus a cheese plate for all the kind words you've been been laying down about them for years. Come on, Thom, where's the fan appreciation!

The problem is the scalpers use a software than can buy thousands of tix before most people can buy one.

They're trying to make it illegal here, but enforcement will be hard.

Damned kids-- getting in the way of the really important stuff!

A couple of years ago, I tried to get tickets on the phone to a "Cubscon," a convention held every February where old and new Chicago Cub players appear. My son and I are, to say the least, fans. In any event, there were three people-- me, my wife and one of her co-workers, trying to score tickets. We were unsuccessful. We were scarred for life.

DANG, what a pain in the arse!

Well, good luck in the regular sale. You'll make it there. You must.

I can't get pre-sale tickets for Pearl Jam because I never joined the damn TEN club. EVERY time they tour, I kick myself in the ass for not joining that club. But do you think I'll finally learn my lesson and join now? Probably not.

I hate presales but have also found that the best seats are saved for the general public sales anyhow.

I've never seen Dylan in concert, UB, but I can just imagine how crazy those tix sales would be. I mean the man is a legend.

Rubbish it is, Al! I'm planning to use 2 computers this time. Hopefully that will be sufficient.

I'm actually trying for Washington tix, 668, and it is a seated venue, so it's trickier.

My sentiments exactly, Will! Especially the cheese plate aspect. Glad you are putting in a good word with Mr Yorke for me.

Where do I get me some of that software, JustA? JK of course, but damn I feel like a naive clean athlete in a room full of major league ball players.

Thanks, Leazwell. I've got the shotgun loaded.

My heart goes out to you on your pain, Johnny Yen. Perhaps we can form a support group for people such as us.

The arse is only one place that hurts, Justrun!

HA! Sounds like a great mashup, Beckeye. I shall go have a listen.
And YOU go join that damned Pearl Jam fan site. Learn from my pain!

Words of encouragement! Thank you, Deb - I needed to hear that.

That truly SUCKS, Barbara. I will say prayers for you ... because God loves a good concert.