double helices weren't the only noteworthy discovery of the day 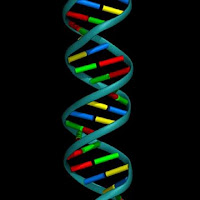 I trust that most of you are out celebrating the anniversary of the discovery of the double helix structure of DNA this evening. Quaffing your Watson and Crick martinis and such. And why not? If not for this amazing and timely discovery, we would not be able to play the DNA-Double Helix game. That's worth a Nobel prize right there.

We made a trek down to Sloth Records this afternoon, and I am really excited about some of the rare finds that were scored. I'll share some of them with you over the next couple of days.

I'm incredibly excited to have found a DeVotchKa cd. I've been looking for their music for over a year now. It's a tantalizing blend of Romany, Greek, Mariachi, punk, and a little Roy Orbison thrown in for good measure. How It Ends, the title track of the cd I picked up,was featured in the film Everything is Illuminated and I believe DeVotchKa also did the soundtrack for Little Miss Sunshine. I understand they blew everybody away when they played Bonnaroo in 2006.

Stayed tuned for some tasty samples.

Plus I was lucky enough to score Colin Meloy Sings Live! I consider this to be another real find, as I understood these cds to be sold exclusively at concerts. Lots of great chatter on this cd, including Colin berating the audience for doing a pathetic job of headbanging to the traditional folk song, Barbara Allen. "... sorriest bunch of metalheads I've ever seen in my life!" God he's adorable.

Oddly, I still haven't been able to find a copy of the Constantines' new release Kensington Heights. I don't know if there's a distribution problem or what, but I've tried a few record stores now and it was released last week. I do have the files for the album already, but I still want to buy it. Gotta support, you know. And besides, it's all about the liner notes, innit?

Oh! I also got my RADIOHEAD tickets in the mail and I almost dropped them down the heating duct in my butter-fingered excitement. Then I really would have been jonesing for those gratis front row centre seats, which I feel I deserve for saying so many nice things about them over the years.

Posted by Barbara Bruederlin at 7:39 pm

Email ThisBlogThis!Share to TwitterShare to FacebookShare to Pinterest
Labels: music is my boyfriend, Watson-Crick is not downriver from Dawson's Creek

I heart DeVotchKa. Even when I'm never too sure how you spell it. Their soundtrack for Little Miss Sunshine is sooo gorgeous. "Till The End Of Time" is like, one of my ultimate happy songs =)
And The Constantines!And Colin Meloy!

Still waiting for The Last Shadow Puppets to release their new one. I mean, the dude from Arctic Monkeys with string arrangements by OWEN PALLETT???
*faints*

Yay, BAP! Another DeVotchKa fan! When I played the cd for the spousal unit, he immediately fell in love with it too. I'm going to keep an eyeball out for the Little Miss Sunshine soundtrack now.
I didn't know you liked my boys, the Cons. If you EVER get a chance to see them perform (they do tour a lot), you MUST see them. Best live band!

I don't believe I have ever heard the Last Shadow Puppets music, you know. But if OPalz is doing the strings, that's well worth looking into. Thanks for the tip. You know he practically runs our national broadaster, the CBC. His music is used everywhere on it. Fortunately there is no such thing as overexposure when it comes to Final Fantasy.

We lost our A&B Sound this month to a move out way out in the burbs. Granted the store had gone downhill in recent years but it was the largest record store in downtown and the only one with a classical music section. I shudder to think of the money I spent in that place during all my, "I'll just have a look," detours through the store. Last time I was there I found Josh Groban in classical and Nickelback in Alternative. WTF? I remember a time when the workers actually knew the music they were selling. Lately, it was, "Is that a band or a movie?"

We're losing record stores around here too, Toccata, so unless you want to head downtown you are stuck with HMV at the soulless mall. And it really is crap. I'm not even sure they have a classical section.

Ooh, I too am waiting for The Last Shadow Puppets!

Man, sometimes there is just too much music. No, I take that back! ;)

It's so weird, Mel, as I do have the files, but I am trying to do the right thing and buying the cd, but the powers that be are not making it easy for me.
SOOOOO excited to finally see Radiohead that it is making me all woozy.

You know the Last Shadow Puppets, do you, Al? They're just not on my radar.
I figure Kensington Heights will get here eventually, especially as I keep dropping in to ask about it. I could always contact their label, as I sort of know some people there.

I only heard about them recently, through uni here. More looking forward to something from the guy from Arctic Monkeys seeing as I didn't really care for their last album.

Look at you! "I kind of know people" at the record label. ;) Hope you find it soon!

Sure DNA is nice but I''m more glad we have T and A.

I sound like a bigger shot than I really am, Al. There was an email exchange a couple of years ago.
I never really into the Arctic Monkeys, so didn't bother listening to their new album. Guess I didn't miss much.

Toast and applesauce is very nice, Dr M, can't argue with you there.

Some great finds there Barbara. The Colin Meloy might be the jewel but the DeVotchKa isn't far behind. Our American friends (and Canadian travellers) should be advised DeVotchKa are about to embark on a full US tour at the end of this month. Near and dear to my heart as Basia Bulat (and fellow Londoner) has been chosen as their opener. I promise it will be a great show. So everyone go see them!

That IS exciting news, Sean. Basia Bulat is great. I saw her open for Final Fantasy last year, and if I am not mistaken, she's coming to the Calgary Folk Festival this summer. Maybe she'll bring her buddies DeVotchKa with her.