apparently fuck is the new black

Remember how for the last few years a disproportionate number of bands have had mammalian names?

Wolf was popular for a while, there was Wolf Parade and Wolfmother and Wolf Eyes and Steppenwolf (okay that one was a really long time ago) and Los Lobos (that counts - don't be an English elitist). Oh hey, Patrick Wolf! Alright that's his real name, thereby disallowed.

And then there were a whack of deer bands - Deerhoof and Deerhunter and Deer Tick, which were followed by bands with murine names - Modest Mouse and Mice Parade and Exploding White Mice.

And while many of these mammalian bands are still around, it seems to me that the animal named band is starting to fall out of fashion. What do I see as the new trend in band names? Fuck names.

This is hardly a new phenomenon actually. There are a whole boatload of bands in the punk, hardcore, or metal genre who boast fuck in their monikers. You can choose from Fuckface or Fuckhead or Dogfuckers or Fallen Fucking Angels or Fuckin' Shit Biscuits or even the straightforwardly named Fuck, but admittedly these are all pretty obscure, highly niche-specific bands.

Lately though, expletive bands have been working their way further and further into the mainstream. You've got bands like Holy Fuck, Twee As Fuck, and Fuck Buttons getting daily press in the music magazines, showcased at festivals like South By Southwest, Glastonbury, and Coachella, and playing well-attended shows. And I just love it when they are talked about on the radio (admittedly still rarely) as the people discussing them never quite know what to call them.

I think it's all great fun, but it does beg the question: where the fuck do we go from here?

~*~
We finally watched There Will Be Blood last night. This film sure has polarized people, hasn't it? There are just as many people who passionately hated it as absolutely loved it. Personally I found myself pondering it all day.

Paul Dano almost stole the film, as the Sunday twins, in particular Eli, a part he wasn't even supposed to play originally. Daniel Day-Lewis, as Daniel Plainview, is one scary-assed but fascinating character, who has spawned some highly quotable quotes, like "Drainage!", "bastard in a basket" , and of course, "I drink your milkshake".
We, of course, were very curious to hear Jonny Greenwood's highly acclaimed soundtrack for this film. Seems that this too was a polarizing point for people. It was highly unusual, and I found 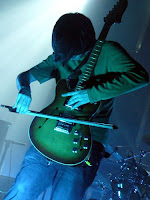 it haunting, in particular the oddly drumming track that accompanied the oil derrick explosion. That track, however, was originally written for the film Bodysounds, effectively disqualifying Greenwood's There Will Be Blood soundtrack from consideration for an Academy Award for Original Soundtrack.

Still, you have to admit that Mr Greenwood has come a very long way from his school days where he was desperate to join brother Colin and the others in the band but was too shy to ask, so instead he would hang around the the corners of the rehearsal room, shyly doodling away on an assortment of instruments he would find there. After rehearsal, according to Colin, " he'd be like, look, I can play this, and he'd whip out another instrument."
Posted by Barbara Bruederlin at 6:54 pm

Email ThisBlogThis!Share to TwitterShare to FacebookShare to Pinterest
Labels: there will be milkshakes, trendy band names

Fuck, I'm Dead! were pretty great too(actually, I've never heard their music, but I still like them for the name)

The IMBD message boards for TWBB were basically "boring", "IF YOU LIKE THIS THEN YOU'RE A COMMUNIST", "worst soundtrack ever", "best soundtrack ever" and the two parter of "is it just me, or was Eli kind of gay" and "PHILISTINE!"

Fuck, I'm Dead is a great band name, Anony, and I am chuffed to add it to the list. Well done, you.

I love how people get all ALL CAP when irate. Tomorrow I now plan to call as many people "PHILISTINE" as humanly possible.

You are so on top of things, and I for one am glad of it.

I think we now need the Fuckin' Wolf Mice. It's time.

Well, I loved TWBB, one of best films I saw last year. I have the soundtrack too, feels a little odd to listen to independently though.

There are some funny YouTube mashups of the milkshake scene (mixed with the song).

Can't seem to muster the will to see that film. I don't want anything burdensome or heavy and if you pondered it all day...hmm, not that that is necessarily a bad thing. I do like DDLewis, however. It sounds violent and I just don't want to go there these days. Isn't it about early oil drilling in Texas - the movie Giant gone slasher.

"I think it's all great fun, but it does beg the question: where the fuck do we go from here?"

Fuck, If I Know

The name of my new garage band, and my comment.

"but admittedly these are all pretty obscure, highly niche-specific bands."

Yeah, you can pretty much count out any chance at radio play with an Fbombed name.

You're a PHILISTINE, Dr M! Actually, the resident offspring keeps me on the cusp.

Simple, yet elegant, Deb, it is indeed the only sensible direction for a band name to go. And you really should be making up paint colours or something. You're a PHILISTINE!

It's certainly a film that stays with you a long time, Al and has spawned a whole new vein of memes amongst you PHILISTINES! I can see the soundtrack being odd to listen to as a seperate entity. Might make good background music though.

It certainly isn't a film to see if you need to keep things light, Leazwell. But there honestly isn't a great deal of violence within it, although the scenes of violence are quite brutal. Not gory though.

Succinct. I can appreciate that, Urban, although it does make you a PHILISTINE!

I have actually heard some of them played on CBC, JustA, but their names do require some creative editting. And you're a PHILISTINE!

Um, Zombie, did you really forget about Wolfman Jack. I know he was a DJ but DJs are considered musicians these days, aren't they? Clap for the Wolfman was proto-rap, wasn't it?

Funny, on Fri night I sat betwixt two who saw that flick.One was yeah and one way nay. I guess, There Will Be Indecision.

Interesting observations about expletive bands. I'm not sure I like the mainstreaming of the F word. You risk diluting its formidable brand. Soon that word will a bland and meaningless utterance like darn or gosh.

Then what will we be left with? I say keep Fuck pure and uncommercialized!

If I start a band, I'm gonna name it The Fuckin' Nebshits.

First, I am glad I read this on my phone and not at work. I don't normally do that-- it's like the powers of the eff were looking out for me.

Second, eff itself is just too dang trendy anymore. I saw a poster for a television show today where the acronym 'OMFG' is popular-- so they put it on the poster. Is that really necessary?!

You risk diluting its formidable brand. ... I say keep Fuck pure and uncommercialized!
Very valid point, Gifted, Fuck may well be in danger of losing its power with overuse, and then what are we left with?
I'm not surprised about the strong opinions on TWBB - it's not a film you can really stay neutral on.
And hell yeah, let's throw Wolfman Jack on that list. He was never really part of my sensibilities, but what the heck.

The Fuckin'Nebshits - beyond brilliant, Beckeye, and if you pick up a smokin pair of 4 inch pink stilettos, you'll make gajillions.
Yeah Holy Fuck are pretty popular - SXSW, Coachella, Glastonbury, and a Juno nomination to boot.

It IS a trend isn't it, Justrun? It's a fashion statement anymore. And where do we go from here?
Hey sorry I almost got you fired!

I'm down with the sickness of all kinds of fuckery. I've been saying "fuck" in every sentence, lately. Rather unprofessional, but necessary.

And fun! In typical Libra fashion, I am sort of sitting on the fence on this matter, PF. Although I agree that overuse will almost certainly dilute the power of the word, I sure do enjoy using it. Quite a lot.

How's about The Fucking Champs? Oh, and also Fuck The Facts.

Also, if anybody's interested in a little bit of fucking trivia, the word "fuck" was used 824 times in the 2005 motion picture titled -yep you guessed it- Fuck.

I'm going to be the odd one out and say I don't like all the fuck(ing) band names. Seems like a juvenile cry for attention to me. And as said before, it's a trend. Fuck trends. (How 'bout that as a band name?)

Oh I wanted to see that one when it was playing at the film festival here last year, BAP, but I couldn't get to it. I think it's on video now.

I think a few other people didn't like the trend either, John. I'm sitting on the fence, it is juvenile, yeah, but it has its charms.