he who walks behind the corn

I sprang the Resident Offspring out of school early this afternoon, so that we could head up to the airport to meet up with my niece who had a bit of a stopover on her way to an exotic hot spot destination. When she gets to Edmonton, she is spending some time with someone whom her wacky mother insists upon calling a "faaaah-rennnnd" (meaning a possible future grandchild genetic material donor).

It was great to spend some (albeit too brief) time with her, much as we did with her zany little sister a couple of weeks ago. If we keep this up, we'll never need to travel anywhere anymore. The entire world will come to us.

But it did make the schedule too tight to partake in a proper Friday Random Ten, and besides I spent much of the day in the urban assault vehicle groovin to my man Thom doing some bad-ass beat-boxing. No doubt he would approve of my method of transportation.

Prior to that, however, on the way to school, we listened to the highly underrated Hefner, and one track in particular got us to thinking about songs that feature children's singing. Now I know a lot of people are really creeped out by songs that feature kids singing, but I think they will be pleasantly surprised by the quality of some of those little buggers' choirs. 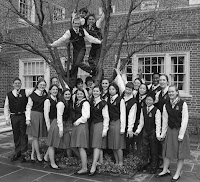 Since I am currently reading High Fidelity, which is essentially a list junkie's playground, chock-full of top fives, I can't think of a more ideal time to usher in a brand new semi-regular feature inspired by the book, entitled Favourite Five Friday.

Friends, I bring you:

5. 15 Step - Radiohead
- okay, these kids don't actually sing - they cheer, but c'mon, you knew I was going to sneak in some Radiohead if at all humanly possible. Besides the whole school gets credit on the album, which is pretty cool.

4. If You're Feeling Sinister - Belle and Sebastian
- again, not exactly singing, but they are yelling and playing in the background and the theme fits.

3. Another Brick in the Wall Pt 2 - Pink Floyd
- the original creepy-little-English-kids-singing song; man they make those little accents sound sinister!

2. The Day That Thatcher Dies - Hefner
- more little English kids, but more joyous than creepy; you can totally see them dancing on Margaret Thatcher's grave.

1. Mango Pickle Down River - M.I.A.
- these little kids even have a handle - the Wilcannia Mob. How cool is that? And if that little dude with the smoker's rasp isn't the bad-assest thing ever, I don't know what is.

-#-
Have a fabulous weekend, you gorgeous creatures. But watch out for those hollow-eyed children standing by the side of the highway.

Posted by Barbara Bruederlin at 7:59 pm

Full Disclosure" I liked the Friday FF. I'm buzzed on wine. You should check out my Twitter SXSW feed.

The Day That Thatcher Dies may be prescient; she went into the hospital today. Tragically, though, I omitted her from my Dead Pool list this year.

Since I too am reading HF I decided to shorten my monday movies themes to 5 as well, may leak over to my new podcast, but I'll probably forget by then. Look forward to more Friday FF!

That's quite the disclosure, JustA. You're cute when you're drunk. I shall check out your Twitter.

Yoiks, I would feel rather guilty if this post actually causes her to pass on, Johnny Yen. But I have a feeling she's going to be kicking around for a while yet, so you have time to add her next year.

Dang, I knew I forgot someone!
Isn't it weird, Al, I know about 4 people who are currently reading High Fidelity. One more and we could be a top five list! Can't wait for your podcast!

Usually it's others that have to be drunk in order for me to be cute.

It's the friends that are at sxsw and posting the inside scoop.

Lucky friends, JustA! I would love to be in Austin right now. Are they playing, reporting, or just hanging out - I can't tell from the threads?

Can't wait for your review on the spring reading challenge. I think I've mentioned Polysyllabic Spree and Song Book by the same author. You will love these books.

I am certainly planning to read more Hornby, Gifted. I feel as though I have donned a comfy old sweater when I read him.

Nice idea for a series and hey, free music!

Load em up while they're hot,Dale!