we've been talking about Jackson ever since the fire went out

For some reason I thought that decades ago someone had recorded a response to Johnny Cash and June Carter Cash's song Jackson, but as I cannot find any evidence of this, maybe I just dreamed it. Or maybe I am thinking of the song itself, you know how June gives snarky responses to Johnny's statements.

Whatever the case, it got me to thinking about songs that do have sequels/responses to them. Songs like Lynard Skynard's Sweet Home Alabama as a response to Neil Young's Southern Man. They are fun to look for and compare. Here are some of my favourite examples, do give them a listen and compare:

from Belle and Sebastian: 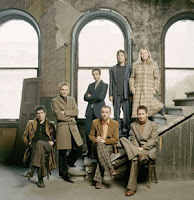 - written when Stuart Murdoch fell in love with band-mate, Isobel Campbell
key lyrics: now the centre of my so called being / is the space between your bed and wardrobe with the louvre doors

I'm Waking Up to Us (Push Barman to Open Old Wounds - 2005)
- written when Isobel dumps Stuart and leaves the band. Ouch. The pain in Stuart's voice is palpable.
key lyrics: you're going to walk away intact / I think you never liked me anyway / you like yourself and you like men to kiss your ass / expensive clothes /please stop me there

verdict: Hell hath no fury like a songwriter scorned. Isobel, you never should have slept with that guy from Arab Strap.

Creep (Pablo Honey - 1993)
- their first single and one of the bands biggest hits
key lyrics: what the hell am I doing here / I don't belong here

My Iron Lung (The Bends - 1995)
- written as a reaction to the success of Creep, it refers to how the song simultaneously sustained and constricted the band
key lyrics: this is our new song / just like the last one / a total waste of time / my iron lung

verdict: While you should never bite the hand that feeds you, sometimes it pays off to spit on it.

- Virtute tries to talk sense into her owner to stop his self-destructive ways and to believe that he is strong
Key lyrics: I swear I'm going to bit you hard and taste your tinny blood / if you don't stop the self-defeating lies you've been repeating since the day you brought me home

Virtute the Cat Explains Her Departure (Reunion Tour - 2007)
- self-explanatory title, really, Virtute explains what finally drove her to leave home
key lyrics: it had something to do with the rain / leeching loamy dirt / and the way the back-lane came alive / the half-moon whispered go

verdict: You can't blame the poor cat, the dude was just impossible to live with.

~*~*~
I know that I must have missed a lot of good songs and responses to them. Do fill me in. Do you have any favourites?

Or on the other hand, are there any songs that you think need a response song?

Posted by Barbara Bruederlin at 3:57 pm

Email ThisBlogThis!Share to TwitterShare to FacebookShare to Pinterest
Labels: call and response, sometimes you just can't say it all in one song

I would like to hear a response to "You're So Vain".

Brilliant, Splotchy! I wonder why no one has ever done that? It's just begging for an answer.

I used to think Leonard Cohen's "Chelsea Hotel #2" was a response to Joni Mitchell's "Chelsea Morning." But then I heard it was about Janis Joplin. Speaking of Chelsea, there's Elvis Costello's "(I Don't Want to Go To) Chelsea" and the Fratellis' "Chelsea Dagger"...

One more... a response to the Stones' "Waiting On A Friend" -- maybe someone who is pissed off because his stupid friend is waiting in the wrong place.

Oh, Radiohead, how hard you must have it with your huge hit single and all of your subsequent indie glory.

I think "I call my baby Pussycat" by Parliament needs a response.

Also, though she claims it was accidental(!), Loretta Lynn's "Mrs. Leroy Brown" is a practical sequel, or at least a different perspective, on Jim Croce's "Bad, Bad Leroy Brown."

I've always wondered why it was called #2 as well, John, and as far as I know, Cohen never dallied with Mitchell, but there's a lot he isn't telling us.
I don't know that Fratellis' song. I've have to check it out on Chelsea Day.

Splotchy, maybe that Stones' friend was actually waiting for his man, a la the Velvet Underground. That's what the problem was the whole time.

Quit Bonoing me, Beckeye!
Actually Radiohead are lucky that they are British and are afforded some measure of anonymity. Can you imagine if they lived in LA?

You got me on that song, Just A. Google will be working overtime here shortly.

The thought of it just gives me the willies, John, but I think it has more to do with the fact that not only did Mrs Leroy Brown take her husband's last name, she took his first one as well. I wonder if that was meant ironically.

Excellent post. I loved your key lyrics and learning more about each song. I tend not to go into the history of a song or artist, but I do enjoy reading about it from time to time. :)

I do gravitate toward learning the history and all the trappings around a song, Al and then I can force all that information on you.

That was such a COOL post Barb :OD
I love Splotchy's suggestions haha!

He's working some good ideas there, Mel, isn't he?

Perverse on so many levels.

Nicely done, Teddy. Another one I will need to look into.

Actually Radiohead are lucky that they are British and are afforded some measure of anonymity. Can you imagine if they lived in LA?

I dunno, anonymity doesn't seem to be a problem for David Beckham.

I think the "Happy Birthday" song requires a response, especially by those who have decided to no longer have them.

Quite right, Dale, and that's why I always sing the "you belong in a zoo, you look like a monkey" version. So much more age appropriate, I think.

hey, isn't everyone one of meatloaf's songs just a response to his previous song?

Magnetic Fields, "Lonely Highway": "I'm never ever going back to Jackson / I couldn't bear to show my face / I nearly killed you with my drinking / Wouldn't be caught dead in that place"