we're not as polite as everybody thinks we are

There must be some degree of cut-throatery coursing through Canadian veins after all.

How else to explain the fact that there are over 100 Canadian acts playing at the South by Southwest festival this year? And since the fun doesn't get started at SXSW until mid-March, we could very well see an increase in the number of musically minded Canucks who are set to swamp Austin.

Lock up your indie kids, Texas, the Canadians are storming the border.

Check out the superbad list of confirmed Canadian acts:
(* bands whom I have had the privilege of seeing perform)

If I can give you some unsolicited advice here, I would strongly suggest that if you have any inclination to attend SXSW, that you do it this year. Two of my favourite ever bands to see perform live, the Weakerthans and the Constantines, will be gracing the streets and the stages of Austin, and trust me when I tell you that you do not want to miss that. 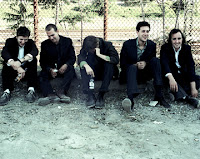 In fact, the Constantines have a new album dropping soon (April 15), and I have it on very good authority that it is gorgeous! Kensington Heights, it's called, and while it has some really pretty heartfelt songs on it, it still rocks as hard as the Cons know how. Here are some notes from their studio diary, about the sort of things they have been saying during the mixing stage:

"that guitar should sound more like a bear wrestling a rabid mongoose, and less like sleeping at your grandmother's house"

And since we are talking about music, and since this post is not nearly long enough, here are the Friday Random Ten that my laptop assaulted me with this morning. We start with the Constantines and the Weakerthans and I did not cheat one iota. My laptop simply knows what I need.

Arizona - the Constantines
(Manifest) - the Weakerthans
Going for a walk with a line - Momus
When something stands for nothing - the Headstones
I'm just a killer for your love - Blur
Inner flight - Primal Scream
The magic position - Patrick Wolf
Caribou - Pixies
Club foot - Kasabian
I don't mind if you forget me - Morrissey
Unlike Morrissey, however, I do mind if you forget me. So please, tell me your grand plans. You know that I live through you.
Posted by Barbara Bruederlin at 4:10 pm

Fucking, eh! That is a lot of Canadian acts. As you say, wooo and hooo!

Been enjoying the new Cons record muchly this week on my wanderings through town. Have yet to listen to it fully, but from what I have heard its quite fab.

BB, let's start a revolutionary movement: The Canadians-aren't-that -polite-and-nice Liberation Front. We can charge the ramparts with burning spears and indie music. We'll show them we are not polite. We'll show them, won't we.

It is truly fab, Al. Kudos to the Cons and to the finder of the new record.
I sure wouldn't mind being in Austin mid-March, but sadly, not going to happen this year.

Can we paint our faces blue too, Gifted Typist? Although maybe we should stick to red. But I am completely with you on the burning spears across the border attacks. Cue the indie music.

I'll paint my face green .... oh, my face is already green! So I won't have to do the face paint for the attacks.

Hey Barb,
That is quite the list of acts. I find it amazing that as Canadian we always underestimate our abilities and talents. Some kind of national inferiority complex.
I must admit that I do not recognize a lot of names but there are some.
Inward Eye is a close friend of mine's three sons. I believe that they are recording with a label in England. Maybe when I retire in 2 years, 11 months, 20 days, 14 hours, 05 minutes and 23, 22 21 seconds, I could be a assistance of some sort for the band.
Your surprise still hasn't made it to the snail mail depot.
Bruno

Yes, think of all the time you will save, Gifted Typist! You'll be able to make two attacks at least.

It's funny, Bruno, in a book I read recently there was a formula for determining how cool a band is, and one of the factors was extra points if the band was British or Canadian. So amongst the indie rock world, being Canadian is recognized, just not necessarily by the hoser in the street. Not that I am calling you a hoser.
I have got to suss out Inward Eye, how neat that you know them. You could be a roadie for them in < 3 years!

I wonder if Morrissey minds if I think he's a wuss?

As long as you are not a Canadian, I think Morrissey is fine with that, Beckeye. But he sure hates anybody who lives in a country that has a sealing industry. Oddly enough, Spain, with its ritual torture of bulls, is fine with him.

That is one rather delightful quote there.

Hope Austin has their beer supply well in hand. Remember when Grand Forks hosted the World Junior Hockey and they ran out of beer!

Wow, I can spell the bacon frying already.

The only one of those I've seen is Matthew Good- though when Band followed his name.

But since we're doing Canadian Music for Beginners, Cambridge Bay (Tanya Tagaq) is in NU, not N(W)T. Tut, tut.

My grand plans involve hiding from the world. That's not so grand now that I think about it, that's just the weekend. Go Canada! Oh, and congratulations to John on spelling the bacon frying. :-)

That's one scary scenario, Toccata, a town full of junior hockey players and no beer. I'm surprised no one was killed.
From what I understand, Austin is well stocked, thankfully.

Ah yes, the pre "I'm leaving the Matt Good Band and I am taking Matt Good with me" days. His shows are very different now, John, almost exclusively acoustic. They're both good.
Ooops, on the Cambridge Bay. In my defence I will say that I cut and pasted the list, but I should still hang my head for not catching that. I am a bad Canadian (but Chart is worse).

That plenty grand enough for me, Dale. I can't think past breakfast, especially with all this bacon spelling going on.

Luckily, it's not necessary, all one has to do is look for the performers with the shifty eyes . . .

The shifty eyes are only a result of squinting at the cold, Just A. Down in Texas you will only be able to tell the Canadians by their drinking abilities.

I'm an ass John, forgibe me. Please note, the b and v are fairly close together though on the keyboard.