Our aspirations are wrapped up in books, our inclinations are hidden in looks 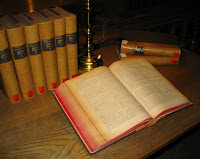 According to the Global Language Monitor, the English language will reach its one millionth word sometime this year. By comparison, Spanish has 275,000 words, while French has 100,000. We are a loquacious lot, I guess.

With such an plethora of words available for me to use, I wonder why I overuse actually and awesome so often. Laziness, I guess. This must stop.

Here are a few favourite words which I don't use near often enough. The next time I feel the need to use awesome or actually, I shall just substitute one of the following instead:
scallywag
schism
iguanodon
palaver
bitumen
hemidemisemiquaver
pontificate
flummox

Do you have any favourite words?

In book news, Canada Reads begins tomorrow. Sadly neither John K Samson nor John Mutford are on the panel this year, but even in the absence of these venerable bookies, it should still be a great battle. The books being fought over this year are:

I've only read From the Fifteenth District and Not Wanted on the Voyage, but at this point my money is on the latter. For the record, I have picked the winning book two years running, so there.
~*~
And now we head back once again to the shameless self-promotion department, where my lovely assistant will tell you that I have now posted my reading list for the Spring Reading Challenge. Eight books are being attempted by yours truly in this challenge. I may have bitten off a tad more than I can chew.

What are you reading?
Posted by Barbara Bruederlin at 2:11 pm

My favorite words are: "provocateur," "among," and "yes."

I use scallywag and flummox a lot since getting these "Queen's English" knowledge cards. Try substituting "lugholes" or ears. Much fun.

I need to stop using awesome as well. But sometimes it just fits.

All time favourite words are paradox and palindrome. As of late, asshat.

I always liked "ludicrous," before it became a rapper.

And then there's "ubiquitous." What a wonderful word. I think it's Beyonce's favorite, too.

I am not sure what it means, but I am fairly certain I'm not a cyberchondriac. (Which, by the way, is not in the Firefox dictionary.)

I will fight your entire hockey team right now, just me.

I use "flummox" in conversation probably once every couple of weeks, and "Palaver" about once a month. Pontificate creeps in there too. I clearly need to use them all more often.

i am now having trouble because i can not get "brown girl in the ring" by boney m out of my head.

Right on, Chimpy, "yes" is a word I never get tired of hearing either. Especially when it follows "can I have a raise?

"lugholes" and "asshat"? Sounds like one of those weird dishes you folks eat regularly in the UK, Al. Oh wait, that's "bangers and mash" I'm thinking of.

Yeah, "ludicrous" should have stuck to classical music, Beckeye. Just be thankful that "omnipotent" isn't Beyonce's favourite word, or we'd really be in trouble.

That's a major oversight on Firefox's part, Justrun, then, for how else to describe someone who keeps checking their symptoms on Web MD?

You're a true fan, JustA, and I suspect the last one standing. Now if you had challenged the women's curling champs, those would have been fightin' words.

I hardly ever use "palaver", Phlegmfatale. What's wrong with me? I need a quota.

sadly, all I am reading are textbooks... When I finish school I hope to return to the book reading population - I miss my books. :)

I like words such as "indeed" and "quite"... I need to think about that a bit more for something I say often... I'm sure there is something very obvious.

I like colloquialisms, although I can never pronounce it in a pinch.
I use parenthetically. (when I can)
Lately, I have been fired up to use the word incendiary but haven't found the appropriate occasion.
I suppose my favorite multi-use words are still Groovy, and Whatever!

conundrum is a favourite.

one thing that drives me nuts is when i hear news anchors, weather people etc saying Febuary....i had a teacher in school that drilled February into our heads...i dunno maybe its one of those weird psychological things...maybe i'll snap someday and be a serial killer..only killing people that say Febuary....

Oh BB, now I'm all atingle with those words.

I am soooo using those words, 64th note be damned.

Some of my faves of late:

propinquity
abstemious
lurgy
opiate cordial - I know it's two but isn't it brilliant! "Aunt Betty used to make herself a nice opiate cordial to put herself right again! "
- found it in The Meaning of Night, a book reviewed in your Winter reading challenge. I've kind of decided they will my dying words.

"Opiate cordial," she whispered, before closing her eyes and passing into that good night.

I feel for you, Todd, textbooks don't have quite the same appeal, even if they are not calculus texts.

"Groovy" is going to make a comeback, Jim Dandy, mark my words, and then think of what a trendsetter you will be. I love "incendiary, such a powerful word.

I will be standing right beside you, handing you the next magazine of bullets, Kelly, because until people put that "r" where it belongs, there will be blood.

I've kind of decided they will my dying words.
"Opiate cordial," she whispered, before closing her eyes and passing into that good night. - Gifted Typist, you have just made my night. I love the way your mind works.

I'm reading Mavis Gallant's "Paris Stories", a book of short stories. Interesting, I've just stopped at the story called 'From The Fifteenth District' which is a staggering 6 pages long. So, is that just a short chapter from a longer work?

I feel the word awesome has lost some meaning from overuse. I like the word parlay.

I don't know, Dale, it could very well be a case of short story cannabalisation. Hard to say, not having read the story you refer to.
I agree about "awesome" and I think that's why I despise myself when I use it. I shall immediately switch to "parlay".

Sadly, I use ok and well way too much when writing. Ok is not even a real word for crying out loud. It makes me scared to even think about what I overuse when talking.

I like to pretend that I am uberly eloquent whilst speaking, Toccata, but I fear that will prove to be a fantasy.

Why on earth do we need so many words? I barely use more than a few well chosen and highly effective expletives.

I talk good. That's what I sound like. I should carry my blog around.

It's the expletives that count, Karen and you get bonus points for those.

Then everyone would accuse you of being Vincent Price, Dale. Do you really want that?

My favorite words are "facetious" and "birdseed." I too overuse many words, including "fuck," but I revel in my laziness and in "fuck"'s uber-applicability to almost any situation.

Canada Reads...Hmmm..I vaguely remember something about that.

You are 100% correct, Dguzman fuck covers all occasions.

You was robbed, John. I should have been listening to you arguing books this week.