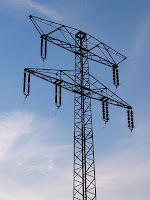 I was actually pretty calm about the whole thing, but I do admit that I felt pretty useless when I was at home being one of the 75,000 people in south Calgary who were without power for a couple of hours. And naturally, we have a guest coming for dinner, whom I have never met, and for whom I decided to go all out - home-made pie and slow roasted short ribs - not exactly the sorts of things you can quickly zap in the microwave during the brief moments of power.

There's nothing like a series of rolling outages to make you appreciate just how much you rely upon having reliable power. The first one hit at 7:30 when it was still dark. I rummaged through the basket of dead flashlights until I found one with a bit of juice in it and then fretted that I would be able to get the garage door open to get the Resident Offspring to school. The power came back before we left, but with a number of traffic lights dead, the 20 minute trip took 45 minutes. Apparently the RO was the first one to arrive to class, including the teacher who did get trapped in her garage.

The next outage hit just as I was ready to put the pie in the oven. This one lasted for an hour and I was starting to get pretty chilly by the end. Happily we were past the deep freeze we were experiencing over the weekend, but I felt at quite a loss, not being able to do the baking and cooking I had planned, no internet, no phone, not even any coffee. Had enough light to clean the bathrooms though. Damn.

The third outage was mercifully brief, but by this time I didn't trust anything anymore, and kept expecting the oven to crap out now that the pie was baking.

Why am I telling you all this? Well I realized just how unprepared I am for being without power for days, if that were ever to happen. Sure we have lots of blankets, and there is a 4 litre jug of water in the basement, but three dead flashlights won't get us too far. And we would be pretty sick of beans after a while. And that's not the source of natural gas that one needs at a time like that.

How prepared are you for an extended power outage?

Posted by Barbara Bruederlin at 3:02 pm

Email ThisBlogThis!Share to TwitterShare to FacebookShare to Pinterest
Labels: not exactly a survival manual

I live partially in the dark now. I still haven't fixed my lights in my room. I have a lighter and candles...and yes, that's about it. I could survive on eating my lipbalm but that's about it.

Hope the pie managed okay and the power stays on!

Not at all. Yikes.

I have some firelogs that I could burn (may be cook on as well!)to keep warm. Some candles and a lighter. But other than that I got nothing....reminds me of the massive power outage that happened in the summer of 2003 in Eastern Canada and the US.

I have a bunch of half used tea-lights, with a lighter somewhere. And I guess I could put a pot in the fireplace on a firelog to boil water and make jello... see, winter is good for something, cooling the jello when you can't use your fridge.

I'm as prepared as that as I am for a zombie attack.

Mmmmmmm, lipbalm survival supper sounds divine, Al. And then there is always Novea handcream, which I am told is a good substitute for hummus.
The pie was premium, thanks.
You still have no lights?

That's what I was saying to myself a lot too, Karen.

Do you have a wood burning fireplace, Jas? We have a gas one, which I guess would still work, but no fan to distribute the heat. We couldn't cook on it though.
You should have seen the traffic jams!

And jello is excellent winter survival food, Stephanie. It's refreshing and it wiggles so it keeps you from getting bored.

I am horribly unprepared for a blackout. You would think I would learn my lesson after last winter with the storms knocking out our power, and the turbid water and all.... I guess my coping strategy is to crawl into bed and not come out til the lights are back on? I hope your dinner turned out to be a smashing success despite the power outages Barb :O) mmmmm Pie!

We're really well prepared for a blackout during spring/summer/fall--not so well prepared were the power to fail for an extended period of time in the sub-freezing weather we've been having this past week. We're set up with extra cold weather clothing and sleeping bags as a result of camping so much, and we can prepare food on a camping stove our outside on the propane grill. Still, I wouldn't want to test it. We did pretty good this past summer when we were without power for two days.

Glad things are back to normal for you.

My main, ceiling light has yet to be fixed. Someday.

Good question and you`re going to hate the Brandon B`s because we could last about a week or so and then some... Sad but true - too much previous living in the north.

You sounded way too domestic in this post to not have a working flashlight. :)

No power during winter is scarey for us in the coder climates.

If we were didn't have power for a few days I'd drive a town over and get a hotel room.

As long as Tim Hortons is operating, I could last forever..........or I could snowmobile to my ice fishing shack and catch me a fish and bring it back for my family. Me good provider. Oops no power I guess we have sushi.
Bruno

The dinner turned out to be lovely, Mel, happily enough. And I think that crawling under the blankets should be a survival strategy for the entire winter, not just blackouts.

Two days without power is nothing to sneeze at, Bubs, but I forgot about the bbq. And that way the spousal unit gets to do all the cooking. Bonus.

Dead Flashlights is a kick-ass band name, Gifted Typist. And the resident offspring and I thought of another good one today too, which I shall blog about, it's that good.

You either eat like a bird, Al, or that one big container of hand cream.

As long as you don't lose the can opener, Kathy! But yes, I've seen your storage room...

I know, Justrun, it makes no sense at all, does it? I guess I'm just an enigma.

Now that is using your noodle, Just A! Beats sleeping in the car with the engine running.

If life throws you a raw fish, make sushi, eh Bruno? But no Timmy's? I doubt you would make it to the afternoon.

I'm not really prepared for power outage. The last one lasted about 2 hours and it was -40C outside, I called my brother and asked if I could sleep over if I needed too... And I learned that cell phones are good flashlight as well as an iPod. And that the door buzzer doesn't work when there's no power and that you have the delivery guy in... But I know that I should be, my grandfather was a firefighter and he still insists on how important it is to be prepared for that and that I should have things ready for that... I guess that he's telling me that because of the 1998 ice storm, no power for over a month in his town.

Over a month, Evelyne, that still seems so hard to comprehend.
This was a bit of a wake up call for me, and getting prepared has gone on my to-do list.

Kim made fun of me all the time for having two florescent lanterns, a couple of led flashlights and a bunch of spare batteries-- until we had a power outage last summer. A huge storm rolled through the area knocking down random tree branches in hundreds and hundreds of different blocks and neighborhoods, so it took them nearly a day to get power back on our block. She was happy to have those lanterns that night.

And I'll bet you were never teased about it since then, Johnny Yen. Nicely done.