damn it feels good to be a gangsta

- stabbed myself in the throat with a french fry. From the inside. I'm pretty sure I have a giant lesion in my throat wall now.

- watched a really sweet, charming, and funny film, Rocket Science. How can you not root for the shy kid who stutters but wants to win the state debating championship (and thereby win the heart of/revenge upon the girl)? This film is stuffed full of quirky and hilarious characters, and the best use of a cello to make a statement I have ever witnessed. 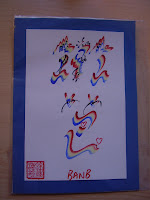 - found the personalized Chinese calligraphy card that I bought at the Chinese Cultural Centre a few months ago. I have adopted "Banb" as my gangsta name. I also quite liked the "Sturt" card, but since I don't personally know any Sturts, I did not buy that one.
Gung Hay Fat Choy!

- nurtured my inner political junkie. Not only do we have the ever-fascinating (and perplexing) American primaries to follow, we now have a provincial election coming up in a few weeks (with the first real possibility in 37 years that we will not end up with another majority Conservative government), PLUS there could very well be a confidence vote in the senate over the Tory's proposed crime bill (or over rather the time limitations that Harper has forced upon the senate to make the vote). So it is shaping up to be an interesting winter after all. Which of course brings to mind the ancient Chinese curse:

"may you live in interesting times"
Posted by Barbara Bruederlin at 9:07 am

Email ThisBlogThis!Share to TwitterShare to FacebookShare to Pinterest
Labels: I should have eaten noodles, I trust I can rely on your vote, noodles never hurt anybody, seeking out a living free of the postures of politics

Takes talent to stab oneself from the inside. Were the french fires good at least? Hope its not too painful now.

Word Banb. Stabbing yourself from the inside sounds like a tough gang initiation. Let's hope you don't have to convert that calligraphy in hand flashed gang signs.

Indeed, Al, it took all my Ninja skills to pull that one off. They were good fries too - homemade, oven baked with the skin on, just the way I like em. Next time I won't make them as pointy.

Although it feels good to be a gangsta, JustA, no one ever said it would be easy. In fact I think some remedial gang lessons are in order, yo.

Who cares about the writers strike here when we have the entertainment of our election primaries. Only wish I wanted to vote for one of them.

I'm still trying to figure out the logistics of stabbing yourself from the inside with a french fry. The American primaries are entertaining as well as perplexing. I fear our hopefully upcoming election may well be more perplexing than anything. Hey, do you remember that infamous Kim Campbell ad and her follow up nonapology? I live for that kind of stuff.

Yo, my sista BanB
done got stabbed
by bitchin' fat Fri.
What a mofo Fri,
that big bithcin' fat Fri
but betta in her throat
than her I.

It would add a level of immediacy if there were someone for whom you actually wanted to vote, yes, Leazwell. Still damned interesting though.

Me too, Toccata, and my gals at As It Happens do such a fine and sassy job of splainin' it all to me. The As It Happens Ladies are my go-to people on the Canadian political scene.

Brilliant, Gifted Typist! It's been a long time since someone wrote me a rap, and your bril poetry done put that bitchin Fri right in its place. You made my mofo day!

I just hate when the things we love most hurt us. Don't lose faith in the fries, though-- they are mostly good.

Silly me, I've been calling you B-Bru all this time, yo.

My sweet, charming and funny film yesterday was Lars and the Real Girl. I really enjoyed it. Barbara, you're the original gangsta.

Wtach out for those french frys. They're killers. So are the Tories.

I believe we are finally living in interesting times again.

BTW, the Mormon mentioned at Monky Muck's was from Calgary.

You're right, Justrun, I can't be hatin on the fries because of my bad aim. I'll offer the olive (oil) branch to them.

I am a woman of many names, Beckeye. Just don't call me late for supper. Badda bing!

Dr M - the french fries at least can be made less deadly (provided you don't stab yourself with them) by cooking them in a healthier fashion. There is no such out with the Tories.

I didn't even realize there were that many Mormons in Calgary, Beth. And you got one of the lazy ones too! Bummer.

Beth, I;m still cacklin' at the mormon observation; all the funnier that he isn't even American

BarB, you a bitchin' mofo ho

Dale, I'm sorry, I skipped right over you somehow; I am as mean as the KBL. I have been wanting to see Lars and the Real Girl, so I am glad to have confirmation that it is funny, sweet and charming. Who knew that Ryan Gosling would turn into such a good little actor (after that Notebook nonsense?

Gifted Typist, I'm going to be saying that to myself as I rollin today: I a bitchin mofo ho.

I live in a country in which our President nearly chocked to death on a pretzel. Food can be dangerous.

hahaha I forgot about that, Johnny Yen! That was priceless!