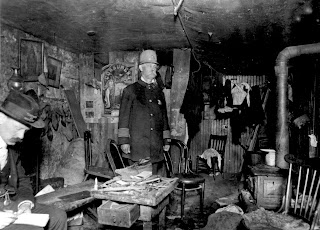 We moved here ten years ago.

We still have boxes in our (very small) basement which have never been unpacked. I have a sneaking suspicion we don't need whatever is in those boxes.

Being a wannabe minimalist at heart, I promised myself that this would be the winter I get rid of that crappy old couch with the hole in seat through which you can stick your entire leg to touch the floor, those boxes of what I believe are opened 10+ year old tubes of caulking, and all those cases of empty wine and beer bottles from when we used to make our own, back in the old house. I am fully immersed in Getting Rid of Shit mode.

Anybody want an aquarium, a deep-fryer, several bags of wallpaper ends that were in the house when we bought it but we no longer have the wallpaper up, or a huge bag of cds which we are now ashamed we ever bought?

Now that my back is once again functional (over 4 days since my last dosage of painkiller - woot!), the clutter in the basement is starting to call to me to put it out of its misery. This morning I made a run to the bottle depot where I received $13.50 for several boxes of wine bottles. And there's lots more where that came from.

It's nice to have a feeling of control over my health and my body again, and now I am taking control of my surroundings. There may be casualties along the way, but ultimately the liberation of the basement from a place where crap goes to die, into a functional space, will be worth any collateral damage.

A New Name for Everything - the Weakerthans
What sort of relationship do you have with the detritus in your life?
Posted by Barbara Bruederlin at 12:19 pm

Email ThisBlogThis!Share to TwitterShare to FacebookShare to Pinterest
Labels: the packrats I live with are getting nervous, this shit has got to go

I need to get in "get rid of shit mode" myself. Who knows? Maybe there is something really important in those boxes. Maybe, say, a key into the future ... like that Keanu Reeves movie The Lake House. But that was the mailbox. Anyhow, who knows?

Make sure your back is supported before you jump in!

It would be best not to look in those boxes - who knows if one or more is a pandora.

There's nothing important in those boxes, Will, nothing but crap. Anything of any worth would obviously be stored in the mailbox. All keys found shall be carefully scrutinized, however.

You know it, Gifted Typist! It's more satisfying than chocolate. Or that other thing that people sometimes like instead of chocolate. Oh yeah ... sex.

I shall make sure my back is in the lock and load neutral position at all times, Leazwell. If I see any evidence of demons or whatnot, the box is staying shut.

You have a deep fryer?? Wow, I could use one of those at this moment as I feel like fries, but probably not the most practical thing to own for me. In nomad land and all. If it had its own set of wheels, I'd consider it. :)

My parents still have boxes in their house from when we moved in 1992. Unopened. I hope I am nowhere near them when purge for their next move.

Good luck with the purging, it'll feel nice to have new space ... to fill with new crap, right? ;)

I say throw it all away! I love tossing things out to trash.

I have dibs on those shameful cds!

I think we have used the deep fryer twice, Al. You'd probably get more use out of it than we ever did. I'd send it but now I am not entirely certain we ever emptied the oil out of it. We must have done, mustn't we? Now I am afraid to check.

I do too, Just A, except now you have to recycle and give stuff away to get reused and all that. Makes me wish I had a big dumpster in the front yard though.

Can I send the couch too, John? Give you something crappy to sit on while you listen to the crappy cds.

What size is the aquarium?

I'm curious about the cd's.

And I'm overwhelmed with get rid of shit mode. Where to start?

And I'm glad your back is better. I can so relate to a body that lets you down...my tooth is ACHING. And, unfortunately it's radiating into my jaw, ear, head and I think my toes are even feeling it. Whine. Wine.

Combine the aquarium and the deep fryer and you have a little restaurant business on the side.

As an absolute consumer and part time packrat, getting rid of things can be very liberating and it of course frees up space to buy more stuff to throw out later. Shame, I'm filled with shame. Maybe there's enough for you to patch the hole in the couch?

Start at one corner, Deb, and keep going. This is one place where my methodological approach actually works.
It's tempting to take you up on the trade, as I don't have near enough ghetto blasters cluttering up the basement. And a golf ball monogrammer! I wasn't even aware I needed one of those, but evidently I do.
Hope the red wine therapy is helping with the tooth.

It sounds great in theory, Beckeye, but there is so little meat on those salamander legs that it's hardly worth the effort. Still making me hungry though.

It's got to be good sturdy shame, Dale, to patch that hole, or those springs are just going to poke right through and stick me in the ass again.
Just how strong is your shame?

Good luck with that.

Depends Barbara, how deep is your ... never mind.

Yuppers. My ass just boarded the getting-rid-of-shit train, and I'm going to ride that sucker for all it's worth. Full report soon, no doubt. No pictures to follow, though-- too embarraskin!

Don't jinx me, Bubs! I am being frugal, however, and giving myself the entire winter to accomplish mission impossible. And around here that means until May.

My love, Dale, how deep is my love? I'm not sure, and I am also not sure why I feel like singing in falsetto all of a sudden.

I hear you, Phlegmmy. I stole a picture for mine, because the reality was too humiliating.

Recycle that stuff if you can but by all means get rid of it.

You know, the people at the bottle depot are going to wonder about you if you come back day after day dropping of ten years' worth of wine bottles. ;)

OK, fine, I realize the lack of logic there, ten years old does not equate to ten years' worth - but you get it, lol.

Yay for getting rid of old junk - I do that every time I move - I usually manage to throw out a few garbage bags worth of things. But bad thing is that as soon as I move to a new place I start accumulating things again.

I think this is the first time I've ever been here--I don't know what kept me away!

GRIS mode is good. We need to do the same. Moving helps with that A LOT; I got rid of all my tapes and CDs that I was embarrassed to own, etc.

Now what I'd like to see is a title/band list of YOUR CDs you're ashamed you ever brought!

I think my folks have boxes in their basement from 1980. Seriously.

If by recycling you mean sending it to John Mutford, then I'm already ahead of you, Dr M. Everything must go.

You are closer to the truth than you realize, Todd, the folks at the bottle depot have long been giving me funny looks with just my regular wine bottle drop offs.
That's the problem when you settle down and stop moving, you don't stay on top of the crap accumulation anymore. When I used to move annually I was not held prisoner by my junk, it was great.


We've run into each other before, dguzman, I could never forget a face like yours.
Sometimes I miss moving. Okay, not moving per se, but the purging that goes with it.
A list of the cds I'm ashamed I bought? Ouch, now that's laying myself open for ridicule. Great idea, I'll do it!

That's seriously scary, Moxie! Has anybody ever braved a peak inside?

Actually, I was supposed to be comming out to Calgary tomorrow.. but the trip is now cancelled, I don't really need another tank anyway lol

Darn, it's too bad your trip was cancelled, Stephanie, but you are likely right - you don't need another aquarium.

I'll take the aquarium. You can bring it by when you come over to clean out my storage room.

p.s. You're my hero for actually attempting a purge.

I actually had a post about the same thing here. I had boxes that I had not only never unpacked since I moved here nine years ago, I'd moved them a few times before that. When a lot of them were destroyed in a flood this summer, I didn't miss them.

Maybe you could have a party with all the money you make from returning the rest of those bottles .... Or just buy some wine to enjoy on your own ;O)

I love going into purge mode. It always makes my family very nervous. I tend to go a bit crazy and they hold on to things for dear life!

Just think what a big swinging dick I will be when I successfully complete the purge, Beth. I'll bring the aquarium when I tag along with you on some of those great concerts.

Maybe that's all I need, Johnny Yen, a nice big flood. After all, it worked for you!

I think we have the same families, Mel! Packrats vs minimalists.
The wine bottle money generally does go right back into the wine drinking fund. It's a cycle.

ohhh, I am NOT looking forward to cleaning out our storage closet before we move. We have a broken TV in there (maybe 2?), a Compaq 386/20 from the late 80's that's undoubtedly home to a bevy of spiders, probably shit I thought I lost, hahah...

I'll be willing to bet that in the massive amounts of cd's you're sitting on, there's not a single Wham! press to be found. Or Michael Bolton. :D

And you would be correct, Michelle, no Van Halen or Black Eyed Peas either.
It's weird how broken tvs multiple, innit? We've got electronic recycling depots around here now, so at least I know they aren't ending up in landfill. And that Compaq 386/20 should probably be in a museum somewhere.