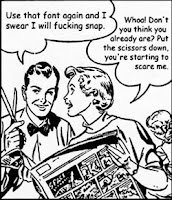 Most disconcerting thing I saw today:
- a presentation on Atrial Fibrillation, Hypertension and Sleep Apnea using the most universally despised font in the world, Comic Sans

Best Pixies' song to sing along to:
- Caribou

Top band that other people cite as highly influential but I hate:
- the Beach Boys

Most disconcerting thing I felt today (that had nothing to do with my back):
- anti-lock brakes kicking in when braking at 10 km/hr

Currently running film I most want to see:
- The Orphanage

Person with the most annoying voice on television besides the TV-tropolis lady:
- Dr G Medical Examiner

Number of times I listened to 4 Minute Warning on repeat today:
- five nine

Show that I am most excited is coming to a tv station that I get:

Britpop band briefly managed by Ricky Gervais:
- Suede
(the story has it that Gervais quit as manager after Brett Anderson, during a press conference, donned a paper bag on his head and demanded "bring me a nine-year-old!")

Book review I am going to write tomorrow:
Perfect From Now On: How Indie Rock Saved My Life by John Sellars

Posted by Barbara Bruederlin at 7:22 pm

Email ThisBlogThis!Share to TwitterShare to FacebookShare to Pinterest
Labels: posts that get written when one can't string a decent paragraph together

The Beach Boys are influential? I think I missed that memo.

I have a thing about "B" bands...I dislike (very much) Beach Boys, Beatles and Bee Gees

She's starting to grow on me, Anony, despite my best efforts. Especially her cutting up bodies face.

In some circles apparently they are revered, Toccata. I just want to slap them, myself.

I'm behind you fully on those, Kelly. I could handle the Beatles if it weren't for that uber-annoying Paul McCartney.

You rule the lists, Michelle! And amen to the hating on each of those.

Everyone knows Arial is the way to go for powerpoint. Geez.

I heart Extras. Don't watch it on regular basis, but its always funny when I do tune in.

I fucking detest the Beach Boys - wtf is UP with the reverence for those guys? Their colossal dorks and have zero game. Wieners. Not in-a-good-way-Wieners: lousy Wieners.

My fave singalong to Pixies is Here Comes Your Man.

Went to lunch at Stoneleigh P's in Dallas yesterday and someone played a whole mess of Decemberists on the jukebox - I looked around for someone who might be as cool as you, but didn't find them. Nice to know there's one in Dallas, though. Glad you're feeling better - sorry I've been so scarce 'round these parts-- I've been busier than a whore in church.

SHEESH - "they're" my second sentence should have started with. MUST start proofreading - that's what happens when I'm all ADD and in-a-rush, it all comes jumbling out unfiltered and some of it is utter crap. Embarraskin!

Why can't Comic Sans be hilarious? Why?

Comic sans is not so bad. I hate Matisse with every fiber of my being.

Extra's rocks. Self deprecating humor is the and no one does it better than Ricky Gervais.

I had to give the speaker some bonus points for trying such a risky move in front of such a conservative audience, Al, but it was truly shocking to see medical terms in anything other than Arial.
I watched Extras for the first time over Christmas and cringed so hard it was almost painful.

Awww don't be embarrassed by what those rushing fingers sometimes leave behind, Phlegmfatale. It's a sign of a busy mind.
Yeah, I could never understand the appeal of the Beach Boys - they make me want to cut my ears off with a rusty saw.
How sweet that you thought of me when you heard the Decemberists! I need to go listen to them right now!

I don't mind cabana boys, Just A, but those overplayed bloated cheesy harmony guys I can live without. Also guys in speedos.
I personally think Comic Sans is getting a bad rap.

You are proving once again that you are no run of the mill font hating monkey, Dr M. Death to Matisse!
Sometimes I cringe so hard at Ricky Gervais that I can't even laugh. Yet I still love him.

I'm not a big Beach Boys fan either, and I totally wanna see "The Orphanage."

oh you beat me! I listened to 4 Minute Warning a mere 6 times today.. darn... but I threw in 4 repeats of Last Flowers To The Hospital

I have no idea waht Dr. G is. I am, however, looking forward to Extras.

Doesn't The Orphanage look spectacular, Beckeye? I loves me some subtitles.

Well done, Stephanie - see you've got 10 repeats happening there. Last Flowers is a great song. Glad to see you are getting lots of play out of your discbox bsides.

Dr G is one of those real life medical mysteries type of shows which we sometimes indulge in here, John, when we are feeling shallow. But Extras now that's a show!

I love Extras!It's almost as cringe- inducing as the British Office. So glad you're feeling better each day!
Berni

It is completely cringe-worthy, Berni! It makes my skin crawl most deliciously.
Better every day now (almost)!