Who's minding the gap now?

I turned on the radio yesterday morning and heard choral music. Because it was December 1, I found it charming and soothing. A day sooner and I would have been annoyed. What a difference a day makes.

For some reason, yesterday was skewed toward all things British. Here are some examples:

The Mind the Gap lady has been fired by British Transport. You know who I mean, that disembodied voice who comes on in the tube telling you to mind the gap and to step away from the doors, that sort of thing. Her firing is an outrage of course, but it could actually bode very well for her career as a voiceover artist and budding comedian.

If you have not yet heard Emma Clarke's wonderfully subversive yet oh so civilized spoof tube announcements, I strongly urge you to go listen to such gems as "would passengers filling in answers on their Sudokus please accept that they are just crosswords for the unimaginative and are not in any way more impressive just because they contain numbers". 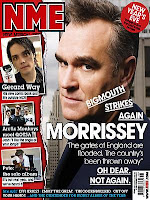 Morrissey is now on my shit list. He has been quoted as making some highly racist and elitist statements to the NME, and while I am generally happy to give people the benefit of the doubt over the NME, in this case Morrissey admits that his xenophobic remarks were quoted correctly, just that they were taken out of context. Excuse me, in what context would eliciting hatred toward immigrants be okay?

It was one thing for Morrissey to blacklist all Canadians for our sealing industry, I can respect that, but I cannot continue to support anyone who talks dreck like that.

In happier Rule Brittania news, I finally saw the film Control yesterday. I won't go into a proper review here, as I have already talked ad nauseum about this film before I even saw it.

But it is beautifully shot in rich black and white, and the actors did a splendid job of sounding like Joy Division (they performed their own music in the live scenes), even though Sam Reilly's voice is considerably higher than Ian Curtis' was and he has a slightly different accent.

Curtis comes across as a thoroughly sad bastard, which I suppose he must have been, but bandmate Bernard Sumner is portrayed as unexpectedly sweet and naive, while Peter Hook continues to be shown as a surly bastard. Considering that the film was based on the book by Curtis' widow, his mistress, Annik Honore, is portrayed in a surprisingly sympathetic light.

And in a delightful example of life imitating art imitating life, the actor who portrays Tony Wilson, founder of Factory Records, looks astonishingly like Steve Coogan, who played him in 24 Hour Party People. Neither man looks particularly like the real Tony Wilson.

When we left the theatre, it was dark and all the shop windows in Kensington were glowing behind the twinkling of the tiny white lights festooning the trees along the streets. Across the river, the illuminated downtown towers shimmered in the bitter cold.

I felt like I was in a Christmas card.

PS - I have now posted my list for the Winter Reading Challenge, if you would care to admire or deride it.
Posted by Barbara Bruederlin at 9:04 am

Email ThisBlogThis!Share to TwitterShare to FacebookShare to Pinterest
Labels: awesome films, bless the mind the gap lady, now you can play Christmas music without my needing to slit your throat, racist old bastards

Does this mean they will no longer say Mind the Gap? That's my favourite part of taking the metro here. Bugger. I'll have to investigate in a few weeks when I'm in London for xmas. Although they say "mind the gap" here too.

I thought the actor who play Ian Curtis was quite brill, but I had never really heard the real one sing before. I'm having a friend over for dinner and we're watching 24 Hour Party People. Woot!

I love walking Christmas cards and have done it myself a few times.

Maybe the Mind The Gap lady could come and take over for my train announcer? I'll pay!

Glad to hear the movie was good.

hahahaha I thought of you when festooning sprang to mind, Al.
I would imagine that BT would just used canned versions of the mind the gap announcement, although I'm not certain how that all works. Maybe there is a new mind the gap lady, but I'll bet she's nowhere near as sassy as Emma Clarke.
LOVE 24 Hour Party People! It gets better with each watching. Enjoy yourselves.

Maybe the TTC and BT could do an exchange, Dale. You get the mind the gap lady, they get the Elvis conductor. I think you win that one.

I decided along time ago that I wasn't going to hold a singer up against he/her music. Likewise, I decided a little later that Morrissey was one of those whose music I'd still enjoy but not having much tolerance for as a person. I'll just chalk it up to having a kickass muse locked up in his basement.

Wasn't Control great? I thought the black & white really added to the movie, and the use of Joy Division's music for the soundtrack was very appropriate.
I was a walking in the christmas card for 6 hours yesterday. Representing the Kensington Business Association and handing out candy canes in a ridiculous costume is tougher than it looks.

Thanks for the heads up about Morrisey. Oddly enough 24 HOur Party People is one of the few Steve Coogan projects that I hated. I loved them usic and the times but the film I hated. Even Shirley Henderson couldn't save it.

John, I can generally seperate a person's views from their art as well, but have to admit I am still exceedingly disappointed in Morrissey's recent words. What happened to all his idealism?

It was so fun to run into you and your charming entourage, Hilary. You guys really rocked your elf costumes. I'm saving my candy cane for a snowy day.
Control was grand. I had a few issues with some parts, but generally thought it was lovely.

I forgot that Shirley Henderson was in 24 Hour Party People, Dr M. You didn't like it? I thought it was quite funny. I liked how people kept breaking the 4th wall and the little in-jokes about who portrayed which musicians.
For the record, Control is nothing like 24 HPP.

I've always thought Morrissey was a whiny prick, so this post changes nothing for me. :)

You were right all along, Beckeye. I bow to your greater power of bullshit detection.

Sounds like that lady was really limiting herself at the train station - yes, she reached a huge demographic, but how many of them could say her name in a game of trivia?

As for Morrissey, I'll have to look into this further, but all signs seem to point to NOT COOL.

'Tis the season for rock and roll movies, indeed, what with Control and I'm Not There (plus the Kurt Cobain doc) at the multiplexes. Plus, it seems as though there are a bunch of docs on DVD.

On the subject of Steve Coogan, it strikes me that - for all intensive purposes - he is Tony Wilson. That's just how it goes when you give such a brilliant performance.

"Her firing is an outrage of course"

Really? an outrage? I heard she wasn't fired for the spoof, but for calling her employers horrid things to the media.

I'm not sure about jobs in Canada, but if you lambast your employer in the news around these parts you'll be standing in the unemployment line faster than saying "mind the gap".

I know what you mean, Will, I see a picture of the real Tony Wilson and think "that's not him!"
As for the mind the gap lady, I am pretty sure she's got a decent future ahead of her. You are right, she was limiting herself at BT.
Music docs, yes, I still want to see The Filth and the Fury, especially with all the punk reading I have been doing lately.

My understanding, Just A, is that she said something along the lines that she would hate to have to ride the underground. And then clarified it by saying that's because then she would have to listen to hear own voice making the announcements.
But I wasn't there, so that's heresay.

this is not the first time morrisey has been held up for some "questionable" actions. i have not read the article but i am not surprised.

i am too tired to post very intelligently tonight.

It's true, 668, he has a history of saying some pretty bone-headed things, but now I think he is becoming increasingly elitist.

I just heard about the tube lady a few days ago, and visited her website in response. I thought it was a hoot.

And you can never get enough of the word "festoon" or any of its variations.

Her site is pretty great, Bubs; it's just festooned with fun stuff.

I KNOW, PF! I spent far too much time there!